Jose Rivera can now add big game hunter to his list of official duties as a New York City housing... 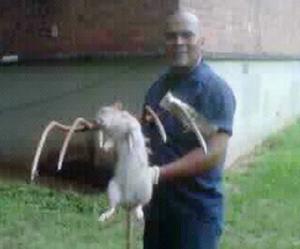 Jose Rivera can now add big game hunter to his list of official duties as a New York City housing worker. Last week the 48-year-old Rivera killed a three-foot-long rat with a pitchfork – yes, a pitchfork – while filling in a rat hole at Marcy Houses. Rivera told reporters, “I hit it one time and it was still moving. I hit it another time and that’s when it died. I’m not scared of rats but I was scared of being bitten.”

I’m not scared of rats either, but then I’ve never faced down a monster-sized rodent like this one with a pitchfork. Give me a handgun any day!

Apparently Rivera’s trophy isn’t the only trophy burrowing below this area of New York. Rivera said that two rats about the same size escaped his trusty pitchfork. Head of the Marcy Houses Tenant Association, Naomi Colon said that the giants have been on the premises for over six years. “The residents have told me that they’ve seen it running around with other rats. She [Rivera’s rat] lived with them. She ran into the same hole they ran in.”

Animal experts, whose job it is to study dead rats on pitchforks, believe the animal to be a Gambian pouched rat. These nocturnal hamsters on steroids can weigh over four pounds and reach over three feet in length. They used to be popular pets until the species was banned from import in 2003 after they were blamed for an outbreak of monkeypox that sickened 100 people across the U.S.

Giant monkeypox-carrying rats as pets?! What’s the world coming to?

The rats are so nasty that residents say even cats won’t mess with them. Resident Stephanie Davis explained, “They get together and gang up on the cats.” Resident Pam Davis added, “They’re here day and night. We don’t dodge bullets. We dodge rats.”

What do you think OL readers? Should New York open a Gambian rat season? Would you take your Gambian rat to the taxidermist? Did you know that Jay-Z used to live in Marcy Houses yet has not one song about Gambian rats?

Fact Sheet according to Wikipedia:

It has up to four litters every nine months, with up to six offspring in each litter

Feral subjects have been known to attack humans living in cramped conditions.

In Africa, it is routinely eaten as bush meat.