Wildlife authorities and government officials in Florida recently offered rather odd assurance to residents there: Pythons in the state are... 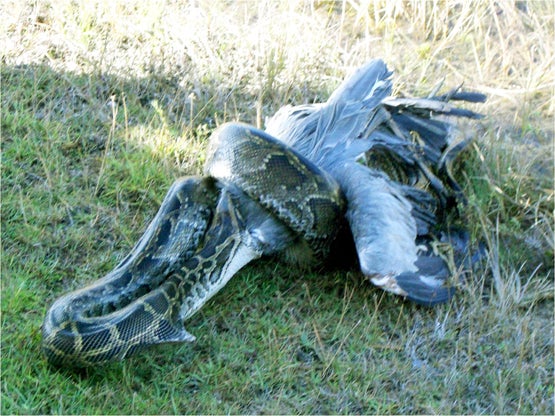 Wildlife authorities and government officials in Florida recently offered rather odd assurance to residents there: Pythons in the state are unlikely to attack and kill humans.

The proclamation might seem out of left field, but according to The Kansas City Star and other news outlets, it is timely. Burmese pythons, native to tropical regions in Asia, are one of the most significant invasive species in Florida, and their population has boomed over the last several years. In 2010, the state banned the purchase of the pythons as pets to combat the influx, but breeding populations have already become well established in the Everglades.

Currently, a proposal from the Obama administration that would altogether ban the importation and “interstate movement” of the pythons (as well as anacondas, Northern African pythons, and other species) is being reviewed by the Federal government.

Proponents of the bill argue that it would be a way to protect alligators, herons, deer and other animals that are threatened by the influx of pythons. Opponents, on the other hand, say it would be an unnecessary and exaggerated ban.

The debate prompted Florida authorities to assure residents that the safety of humans is not an issue in the discussion.

“I’ll never say the danger [of a python attacking a human] is zero,” said Scott Hardin of the Florida Fish and Wildlife Conservation Commission. “If a snake that size wrapped you up, you’d be in trouble. But snakes that size are extremely rare [in Florida].”

This all comes on the heels of a 15-foot python swallowing a 76-pound deer in the Florida Everglades last week.