What will it cost to keep the Asian carp from traveling up the Mississippi River watershed into the Great Lakes?... 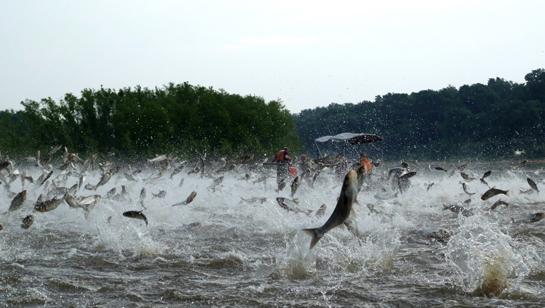 What will it cost to keep the Asian carp from traveling up the Mississippi River watershed into the Great Lakes? How about $9.5 billion.

At least that’s the price tag groups representing states and cities in the Great Lakes region proposed spending in a report released on Tuesday.

The hefty price tag would cover one of three engineering projects that would sever the Great Lakes from the river’s water shed via an artificial link that was constructed over a century ago. Scientists representing the concerned groups state that this water link has already allowed exotic and invasive species move into the Great Lakes and that Asian carp are sure to follow.

Carp moving into the lakes could cost local fishing industries millions if not billions of dollars in losses due to destabilized food webs. Tim Eder, executive director of the Great Lakes Commission, which sponsored the study with the Great Lakes and St. Lawrence Cities Initiative told Indiana’s Post-Tribune, “We simply can’t afford to risk that. The Great Lakes have suffered immensely because of invasive species. We have to put a stop to this.”

But “putting a stop to this” will be difficult as no single government agency has the authority to approve or reject the project. The closest thing to an overseeing agency in this case is the U.S. Army Corps of Engineers, which oversees shipping locks and other navigation infrastructure in the Chicago waterway system for the Federal Government. The Corps are currently preparing a study of their own on how to close off 18 potential pathways between the watershed and the lakes, the results of which are expected sometime in late 2015. Michigan, Wisconsin, Minnesota, Ohio and Pennsylvania have pending federal lawsuits that demand quicker action be taken.

The Federal Government has already spent more than $100 million on an electric barrier and other efforts to keep the carp from moving up the Mississippi but many feel this simply isn’t enough.