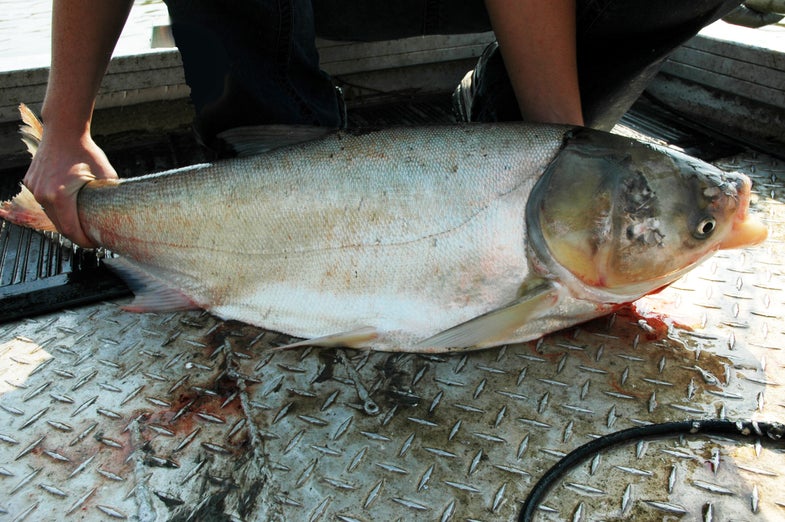 Asian carp are a threat to the Great Lakes. David A. Brown
SHARE

If the fishing world had a most-wanted list, Asian carp surely top it. There are plenty of despised invasives plaguing U.S. waters, but how many of them have a $1 million dollar bounty on their heads?

That’s what the Michigan Department of Natural Resources just dropped on the table. Show the agency a viable plan for stopping those silver and big head carp from reaching the Great Lakes and you could be eligible for a sweet payday.

In case you haven’t already heard the tale, Asian carp are prolific breeders that can reach 50-pounds. The filter-feeding invasives consume massive amounts of the tiny plants (phytoplankton) and animals (zooplankton) that feed native forage species, along with juvenile sport fish such as walleye and yellow perch. Disrupting the food web can wreak havoc on local fisheries.

Boaters and anglers also face serious safety risks, as carp typically leap when frightened and that often yields impacts with boats and boaters.

Imported into the southeastern U.S. in the 1970s to clean commercial catfish ponds, Asian carp are thought to have entered the wild during a flood event. Now, the slimy invaders have aggressively expanded throughout the Mississippi River Basin and have pushed to within about 10 miles of Lake Michigan near Chicago, Illinois.

Electric barriers on the Chicago Area Waterway System are currently the only thing stopping the carp’s advancement. If they enter Lake Michigan, the world’s largest freshwater ecosystem (The Great Lakes) could face insurmountable damage.

According to MDNR figures, The Great Lakes support a $7 billion fishing industry, while recreational activities generate another $38 billion.

State and federal agencies remain diligent in their efforts to find a solution to the Asian carp problem, but who knows? Occasionally, the armchair quarterback shouts out a better play call than the guy with the clipboard and head set.

So, if you want to go Beast Mode on Asian carp and you have a serious plan for doing so, drop the MDNR a note.

Will it work? Only anglers can answer that question, as the premise depends on participation. But anyone paying attention to their local fisheries will have a hard time denying the harmful impacts invasives bring.

Get rewarded for helping protect the resource you love — sounds like a no-brainer.

For more on the Asian carp saga, visit http://www.asiancarp.us/.