Huge Striper Will Not Be Certified for Ark. State Record but May Still Qualify for World Record and $1M Prize

The following has more twists, turns and examples of questionable behavior than most soap operas. Angler Rodney Ply and his... 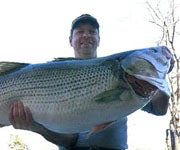 The following has more twists, turns and examples of questionable behavior than most soap operas.

Angler Rodney Ply and his friend Chad Whited took to Bull Shoals Lake in Arkansas for a little fun on Feb. 18. That fun turned to excitement when Ply landed a freshwater striped bass that weighed more than 68 pounds. Ply’s fish was so large that it not only shattered the state record by more than four pounds, it also qualified for a $100,000 prize. Ply had entered Mustad Hook’s “Hook-a-Million” contest where state record fish qualified for a $100,000 winning, and $1 million for world record fish. Unfortunately, none of this came to pass because…well, there are a lot of reasons.

After landing his striper, Ply weighed his catch at 125 Marina. Seeing that the fish would indeed break the current state record of 64 pounds, 8 ounces, Ply called a state game warden to get his catch certified. The warden told Ply to meet him at a grocery store 30 miles from the marina, according to KATV.com. When Ply arrived, he found the scale at the store was too small to accommodate his fish. As were the scales at the “four or five” other places he visited. Turns out the only scale that could accommodate his fish was the first one he used at 125 Marina.

However, no state rep would make the trip to see the fish get weighed because the scale was not certified (it since has been and was found to be in perfect working order). Ply’s fish will not be certified for a state record because post-catch protocols were not followed, says Mark Oliver, Chief of Fisheries for the Arkansas Game and Fish Commission.

Considering that he had a new record and a lot of money on the line, Ply appealed his case via an email to Arkansas Game and Fish Director Loren Hitchcock. The email he got in return was direct, condescending and anything but professional. It read in part, “You seem to think I personally certified all previous records and it is my decision to vary from standards. It doesn’t work that way on my watch. You are misinformed. I’m not going to vary from written guidelines.”

However, it turns out that some recent certified entries made during the director’s watch did in fact vary from these guidelines, according to KATV.com. A tilapia that was weighed without a state representative present; a bullhead that was weighed on a postal scale that wasn’t certified until after the weighing process; and a crappie that was weighed on an uncertified scale and was witnessed (at least on paper) by a person not employed by or representing the state.

This inquiry will do nothing to certify Ply’s catch, so his chance at a state record, at least with this fish, is over. But who needs a state record when you can have a world record? That’s right, although Arkansas has already passed judgment, the International Game and Fish Association has not. They are expected to decide by the end of the week if Ply’s fish is a world record. If it is, Ply will get a chance at winning $1 million.

This story is ripe for comment. Do so below!