When the spawn is over and the tailwater action is history, hit these downriver spots to find more fish. 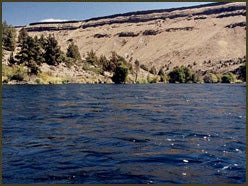 Most walleye anglers know all about the great pre-spawn bite in the tailwaters of Midwestern river dams. But most assume the action is over once the fish complete spawning and disperse toward their summertime hangouts. Fishermen put away their river charts and begin dusting off their lake maps.

There’s no doubt that fishing in running water gets a lot tougher once the post-spawn dispersal is under way. During this period, locational patterns are critical and they may change from day to day, depending on fluctuations in the water level. Rivers are usually falling by early summer and walleyes are working their way downriver, but heavy rains can quickly push the water levels back toward flood stage.

Despite the sometimes difficult and unpredictable conditions, there’s a good reason to stay in river-fishing mode a bit longer: Once big female walleyes recuperate from spawning, they’ll be feeding more aggressively than at any other time of the year.

The sticking point is that they can be very particular about where they position themselves, and pinpointing these locations is difficult at best. Here are some of my favorite spots for post-spawn “eyes” along with some tips about how to fish them.

Current-Swept Points
If I were limited to only one spot to fish during the post-spawn period, it would be a sandy, current-swept point several miles downstream from a dam. A point that juts out into the river channel not only disrupts the flow and creates an eddy; it attracts hordes of shiners and other baitfish. All a big walleye has to do is rest in the slow water along the edge of the eddy and then dart out into the current to grab an easy meal. It’s the ideal setup for walleyes that are still a little lethargic but badly in need of food.

There’s really only one way to fish such a spot effectively. Toss out an anchor well upstream of the point and try to position your boat so it’s directly in line with the inshore edge of the eddy. The walleyes usually line up right along the current break, so the goal is to maximize the amount of time your bait stays in the fish zone. You could work the current break by casting a crankbait or a minnow on a slip-sinker rig, or pitching a jig. With a leadhead of just the right weight (usually 1/4-ounce), I can stay on the bottom better than I could with a crankbait, and there is usually no need to mess with live bait. It’s hard to beat a curly-tail jig or feather dressing, but when the bite is tough, a plain jighead tipped with a lively fathead or shiner can make a big difference.

Shallow Flats
A shallow, sand-gravel flat along the edge of the main river channel is another walleye magnet. The best flats are 6 to 10 feet deep and swept by light current. Some flats may extend for a considerable distance and walleyes will be encountered only in certain spots along the bottom. Consequently, trolling is the best way to locate them.

There are times when the fish will be scattered all over the flat, from only a few feet off shore to the edge of the channel break. But more commonly, you’ll find them at a fairly specific depth. I like to troll with a pair of 81/2-foot bait-casting rods mounted in rod holders that keep them parallel to the water and at a 90-degree angle to the boat. This way, I can cover a swath of water more than 20 feet wide using a pair of crankbaits that run at slightly different depths.

I might use a Size 5 Rapala Shad Rap that runs at six to seven feet on the inside line and a Size 7 that runs a couple of feet deeper on the outside line. The best strategy is to troll upstream just slightly faster than the current, allowing the lure to tick the bottom periodically. Let out just enough line so the bait bumps the bottom once in a while but does not drag to the point that it constantly picks up debris.

By trolling upstream you can move very slowly, yet the lure will still have an enticing action. When it wiggles past a walleye facing upstream, it will often trigger a reaction strike.

Funnels
Post-spawn walleyes love spots where the river necks down and funnels baitfish to them. As a rule, you’ll find the greatest number of walleyes around the upstream and downstream ends of the funnel, where the current speed starts to pick up or drop off. But the narrow part of the funnel may hold some fish too, especially if there are some eddies or pockets along the shore or boulders, bridge pilings or other obstructions to break the current.

Many anglers like to fish funnels by trolling, but I prefer to jig vertically while drifting, using my electric motor to keep the boat moving at the same speed as the current. If the wind pushes you downstream faster than the current or blows upstream and slows your drift, you won’t be able to keep your line vertical, which is a must for detecting subtle strikes. By drifting, I can cover quite a bit of water, yet when I come to a promising pocket, all I have to do is reel in and make a cast or two.

** Depth Considerations**
Water level is a critical factor in locating post-spawn walleyes. When the water is rising, the fish head for the bank. When shoreline cover becomes flooded, baitfish hiding there often draw walleyes into water barely deep enough to cover their backs. Some of the best post-spawn fishing I’ve ever experienced took place during a mid-May rise. I had been trolling a flat adjacent to flooded willows with little success. The water seemed a little too fast and I was reluctant to get close to the willows for fear of hanging up. But the water was a lot slower along the willows’ edge, and there were some nice pockets in the vegetation that looked like they could hold fish. So I reeled in my lines, tied on a 1/8-ounce jig and started flipping into the openings as I slowly moved along the edge with my electric motor.

It didn’t take long to prove this was a good move. I felt a solid thump, set the hook and immediately felt the foot-wide headshakes that are a sure sign of a big walleye. My 6-pound-test mono held, and I was soon admiring a sleek 29-incher. A quarter-mile stretch of willows produced eight more trophy-caliber walleyes. All were caught in less than an hour from water no more than a foot-and-a-half deep.

The water level stayed up for six more days, but I knew I was in trouble on the seventh day. When I arrived at the spot, I could see a fresh watermark on the willows about three inches above the water’s surface. That slight drop pushed every fish out of the shallows. Worse yet, I could never figure out where they went.