An adult male leopard injured 13 people in a bizarre daylong attack in India on Sunday. The incident occurred at... 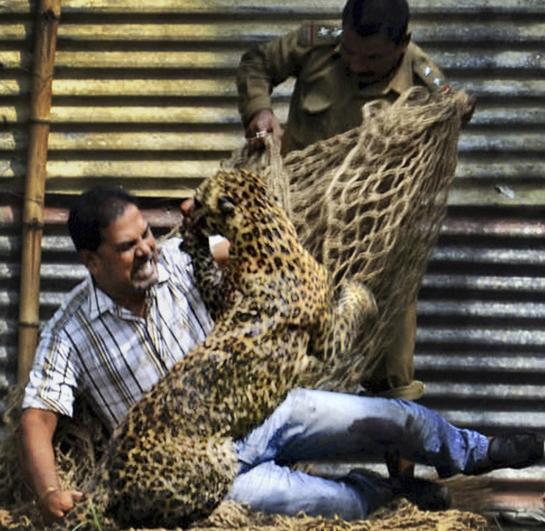 An adult male leopard injured 13 people in a bizarre daylong attack in India on Sunday. The incident occurred at the Oil India Limited field headquarters campus at Duliajan in the Dibrugarh district near the Joypore reserve forest. It is believed that the leopard initially came from the reserve.

Divisional forest officer P Shiv Kumar told the Mail Online, “We were informed about a leopard straying into a bungalow of an Oil executive on Sunday morning. By the time we got there, the leopard had attacked five people.

We tried to tranquillize the leopard, but it got agitated–which is normal before sedatives takes effect–and pounced on the large crowd gathered at the spot. The security personnel were left with no option but to shoot it.”

In this photo you can see an official trying to net the leopard while it mauls one of the bystanders.

This leopard was the fifth big cat to be spotted (no pun intended) in the area in the past several days. Leopards are protected in India where hunting has been outlawed since the late seventies.

While serial leopard attacks are not common, they’re not unheard of either. In fact a handful of leopard attacks have made headlines in just the last few years. See the links below.