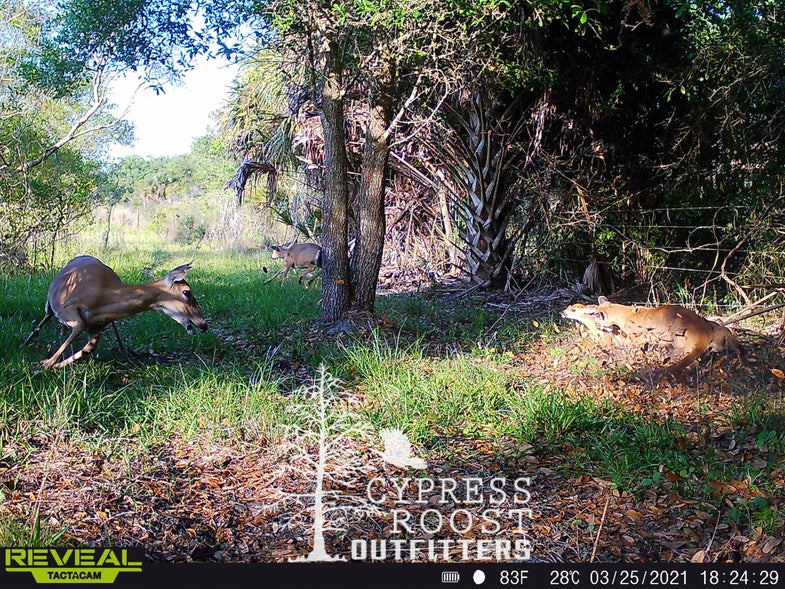 In this dramatic photo the panther lunges for the three-week old fawn, startling the mother doe and a second doe in the background that already is turning to flee the area.
SHARE

South Florida is a wild place, full of game, including panthers. There are many more of the big cats in the state than some folks know, according to Travis Daniels, owner of 2,000-acre Cypress Roost Outfitters near the town of LaBelle, located in the sprawling cattle country of South Florida west of famed Lake Okeechobee.

“Over the years I’ve seen many panthers, and I have lots of trail camera photos of them, including a series with four adult panthers in the same picture,” says Daniels, who guides clients for Osceola turkeys and wild hogs.

Recently, Daniels was guiding a turkey hunting client and set a camera near a worn game trail he knew well and where he’d seen abundant panther tracks in recent weeks.

“I told my hunter I bet I’d get panther photos, but he didn’t believe me because the cats are so secretive,” Travis explains. “I set up the camera, then checked it two days later and discovered photos of a wild Florida panther catching and killing a spotted deer fawn.”

Daniels had been watching a group of does and their fawns for several weeks near the trail and recognized the doe and fawn in the photos by distinctive notches in the doe’s ears.

“I’d gotten to know that doe and fawn, and it’s sad to learn what happened to the three-week old deer in the photos,” he says. “But it’s nature’s way. It’s a wild and untamed place, and the panther may have had kits she was trying to feed, too.”