The Alabama state record for a blue marlin stood strong for 24 years, until last Sunday, when the record was... 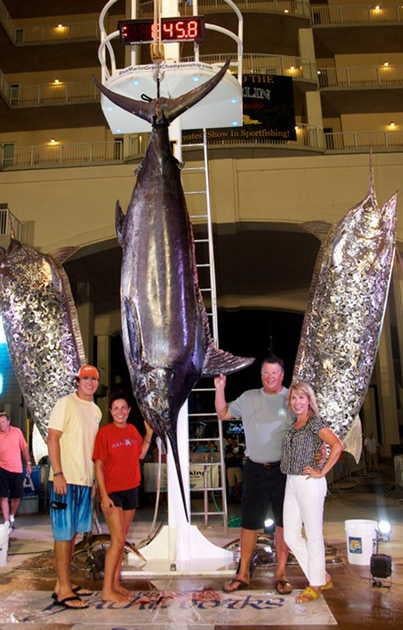 The Alabama state record for a blue marlin stood strong for 24 years, until last Sunday, when the record was broken twice in one day at the Blue Marlin Grand Championship.

Earlier in the tournament, Toby Berthelot reeled in a 789.8-pound monster of a fish. At the time, it was the biggest blue marlin ever caught in the state. The previous record was held by Marcus Kennedy; he caught a 779.3 pounder in May 1989.]

But Berthelot’s record stood for only 90 minutes.

Chris Ferrara, a local business man, was in the midst of a six and a half hour battle with his own state record fish.

“It was unbelievable,” Ferrara told The Sun Herald. “I’m a pretty big guy and it took all I’ve got to pull this fish in. It was truly a monster and she fought the whole time — the whole 6½ hours. She did not want to give in.”

Ferrara, who only started fishing in tournaments four months ago, told The Sun Herald that he dumped around 600 yards of reel before the fish slowed down.

But tragedy almost struck when a pair of seismographic ships began to head toward the angler’s boat, pulling with them five miles of cable.

“We were telling them to get out of the way, we’re in a fishing tournament,” Ferrera told The Sun Herald. “They were telling us we need to move. We had to dump the spool so the fish could swim under the ships. We were thinking that the line could be cut at any minute. The ship passed by us by only 50 yards off the back of the boat.”

Luckily for the Ferrara, the fish was still on the line and three hours later he had his marlin. The fish, which was estimated to be 20-25 years old, was sent to an Alabama food bank for the homeless.

To go along with reeling in a state-record fish, Ferrara and his team also won the dough. They brought in a total of $304,125 in prize money. (One of Ferrera’s teammates, Ivan Duke, caught a 165.2-pound tuna, the second-largest in the event.)