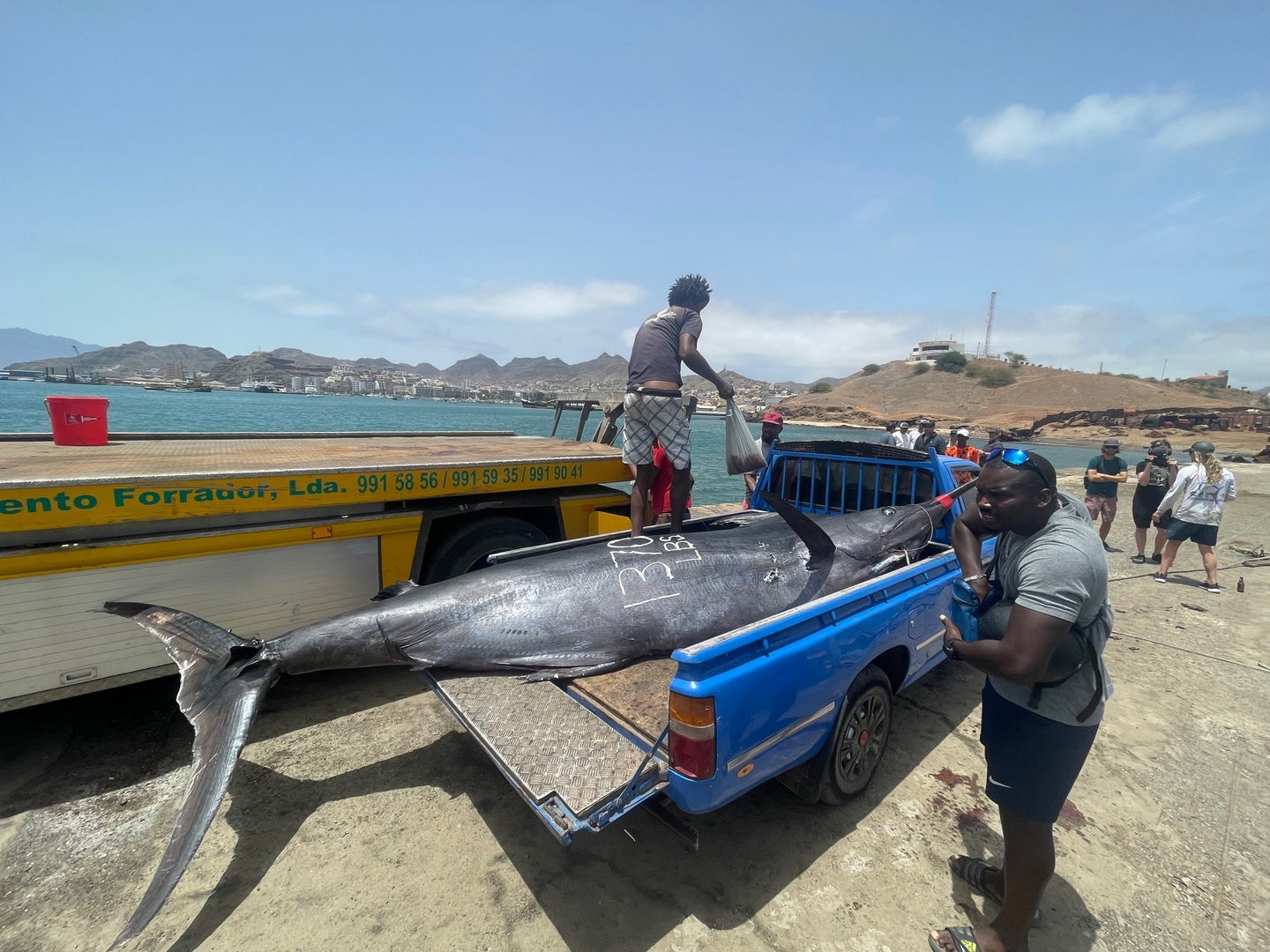 South African citrus farmer Ben Vorster, 50, was fishing aboard the 37-foot Bertram charter boat Smoker with renowned Capt. Ryan “Roo” Williamson the morning of May 19 when he hooked into one of the biggest Atlantic blue marlin ever caught on a rod and reel. The crew was trolling off Africa’s central-west coast near Mindelo, Cape Verde, when they first saw the fish.

“At 7:30 a.m. Roo noticed a monster marlin rise on a far back trolling lure just 15 minutes after setting up for fishing,” says South African Capt. Steve Andrews, one of Williamson’s best friends and fishing buddies. (Williamson was out marlin fishing when Outdoor Life contacted him for an interview, but he told the story of the fishing adventure to Andrews, who shared with us the tale from Cape Verde.)

Williamson only trolls a single long-line lure—typically a Pulsator tube of his own design—for giant marlin, Andrews explains. The idea is to tease a big fish up close, drawing it into the transom teasers and dredges. The crew then tries to seal the deal by pitching out a 4-pound tuna bait rigged on a circle hook.

When this particular marlin rose behind the Smoker on Thursday morning, Andrews says the deckhands worked hard and fast to tease the fish within easy pitching distance. It took the bait right away, and Vorster hopped into the fighting chair to do battle, using a stout rod and an 80-pound trolling reel spooled with 130-pound test line—an ideal setup for pitch-fishing to huge marlin.

“After hooking the fish, it never jumped, so they couldn’t confirm how big they believed it to be,” says Andrews. “Ben is a strong, tough farmer, and a big game hunter. [He] did an incredible job fighting the fish and getting the marlin to the boat in only 30 minutes.”

As the big blue neared the boat, the crew realized just how massive it was. They hit the billfish with flying gaffs while it was still green and plenty strong. The fish bent open one of the gaffs, but the crew was still able to wrestle it into the boat.

Back at the marina, the marlin was placed on a digital scale, where it officially weighed in at 1,370 pounds. It measured 12.6 feet in length with a 6.6-foot girth, and the fish’s tail fin alone was nearly three feet across.

“It’s a dream come true for Ben Voster,” says Andrews. “He’s an avid marlin fisherman and boat owner, just like his brothers Gerhard and Michiel, who were alongside him during the catch.”

The Voster brothers were fishing a six-day charter with Capt. Williamson. Andrews says they enjoyed phenomenal fishing over the course of their trip, catching and releasing 14 blue marlin up to 800 pounds. Virtually all those marlin were caught using the pitch-bait tactic.

“The last morning of the charter trip was when Ben caught his giant marlin,” says Andrews. “The Cape Verde area is just a spectacular blue marlin fishery.”

Williamson would agree. He believes the area might the best place in the world for catching lots of big blue marlin, Andrews says. And Roo is a pretty good judge of the world’s marlin fisheries. The son of the late but legendary Capt. John Williamson, founder of the famous Williamson Lures company, Roo has fished nearly everywhere the species swims. When he’s not chasing marlin and chartering offshore trips, he produces big game lures for Pulsator Lures, which is based in South Africa.

Putting their catch in perspective, the fish that the Smoker crew landed earlier this week is the second heaviest blue marlin ever caught from the Atlantic. Although plenty of anglers target these giant billfish in deep water, it’s not very often that a fish over 1,000 pounds—also known as a “grander”—is brought into the boat.

The IGFA All-Tackle World Record for Atlantic blue marlin weighed 1,402 pounds, and it was caught off the coast of Brazil in 1992 by angler Paulo Amorim. Portugal has produced at least two Atlantic blues weighing in the 1,100-pound class, with the last one taken in 1993. Each of these fish is an IGFA line-class record for the species. A 1,305 pounder was also caught in 2015 off Ascencion Island by Jada Van Mols Holt, and that fish is still the IGFA women’s 130-pound-class world record.