Bebe McElroy and her husband Victor set out on July 13 to hopefully catch some stingrays at the Desk and... 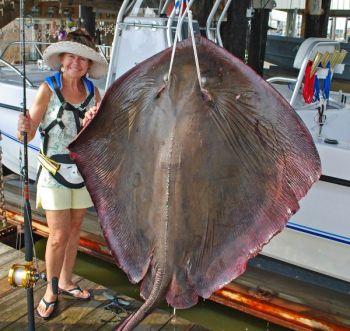 Bebe McElroy and her husband Victor set out on July 13 to hopefully catch some stingrays at the Desk and Derrick Club’s Diva Rodeo in Cocodrie, LA.

They ended up catching this enormous 185-pound leviathan. The huge ray will take the top position in the record books if accepted by the Louisiana Outdoor Writers Association, the official holder of the Louisiana State Fish Records.

The current record holder is Hunter Andras, who caught a 141-pound stingray in Oyster Bay in September 2004.

“That fish has been a target for almost 30 years,” McElroy, who said she used a piece of cut mullet to catch her stingray, told Louisiana Sportsman. “It was so much fun. I get all excited just talking about it… It was just a thrill of a lifetime.”

Huge stingrays have been turning up frequently in LA waters recently.

“Evidently the stingrays have been eating well or nothing has been eating them,” Louisiana Outdoor Writers Association Fish Records Chairman Steve McNemar told Louisiana Sportsman. “I just sent out a certificate for what was the new No. 2 stingray on July 10; it weighed 133 pounds.”

“I then received another application for the new No. 1 that weighed 152 pounds. However, with the 30-day waiting period, it may become the new No. 2 if McElroy’s new application checks out.”

Congratulations Bebe on an awesome catch!