How to Break a Fishing Record 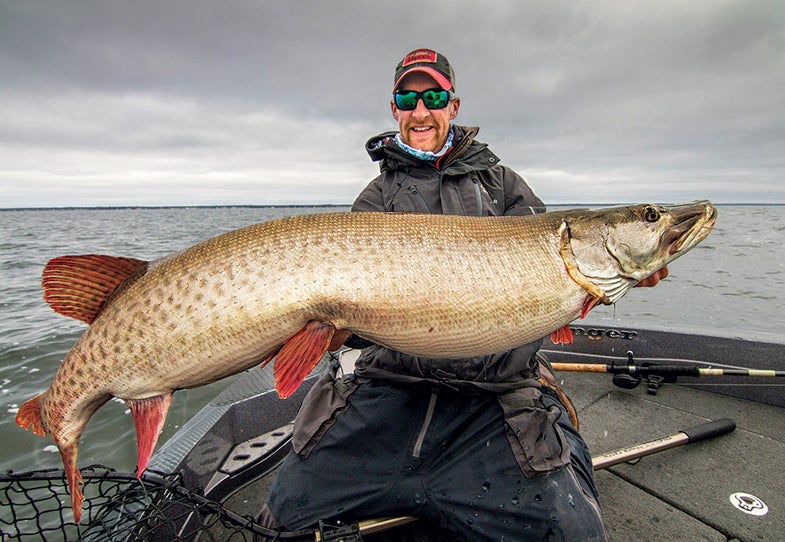 Richard “The King” Petty won an astounding 200 NASCAR races. Decades earlier, Joe DiMaggio’s 56-game hitting streak inspired another generation. Both records still stand today. But records are meant to be broken. That includes NASCAR, baseball, and, yes, angling records. Which records? No one knows for sure, but several angling records are primed to fall this season, and with a little planning, you just might be the angler who pulls off the feat. Here’s a closer look at the hottest destinations and how you can top the charts this summer.

Comprising more than 130,000 acres of water, Lake Mille Lacs can be daunting to fish. But the rewards are great when it comes to trophy muskies.

“Mille Lacs has its own standards,” says Minnesota guide John Hoyer. “A fish isn’t considered to be big until it reaches 55 inches.”

According to Hoyer, there have been eight to 10 fish caught on the lake that would have toppled the state record, which is 56 pounds. But all of those anglers released their fish.

“Anglers have recently patterned these big fish in open water during the early season. They are trolling open-water mud flats that were previously known to walleye anglers.” Hoyer recommends Headlock cranks by Supernatural Baits.

The catch-and-release record is susceptible to falling at any point in the season, and that’s really the record that you want to target. Just make sure to have a measuring board in your boat that runs to 60 inches and that you get the fish back in the water quickly.

2. Whale Away on Giant Walleyes

According to Ohio Division of Wildlife Fisheries biologist Matthew Faust, Lake Erie’s 2003 walleye class was one of the best ever—and it’s that class of fish that is now large enough to threaten the current state record of 16.19 pounds. Recent catches seem to indicate that the record mark could fall soon.

“During a fishing tournament this past fall,” says Faust, “the winning fish weighed in at 14.97—that’s a big fish.”

Port Clinton, Ohio, guide Kevin Swartz agrees that the 2003 class is peaking right now when it comes to yielding trophy fish. The best chance to break the record will be in the western basin, where giant females spawn.

Swartz recommends slow-trolling crankbaits at less than 1 mile per hour. Slender baits are more effective than banana-shaped baits for spawning fish. When fishing 30 feet or deeper, Swartz hits the upper two-thirds the hardest.

For more information: Port Clinton, Ohio, is an excellent home base for visitors. There are plenty of places to stay and eat. Catawba Island State Park is nearby and provides boat launching facilities. For fishing information, contact guide Kevin Swartz.

According to Pennsylvania guide Dave Shindler, hooking Pennsylvania’s next state-record flathead is the easy part. Landing the giant is the problem.

“The biggest that I’ve landed was 42 pounds 6 ounces, but we had a bigger fish at the boat four times before he busted off,” says Shindler. “That one was 52 to 53 pounds.”

Shindler has hooked several other flatheads that weighed in the mid- to upper 40s while fishing the Susquehanna. Some of those fish could have challenged the state record too.

“Once a flathead tips the mid-40s, they become difficult to turn,” he says. “The hook will pop loose. I have tried using circle hooks, but we are fishing current—they eat the bait, and they don’t turn; they just settle and let the current pull them to their position. So I prefer the Kahle hook.”

Shindler points state-record seekers to the lower stretches of the river from Harrisburg to the mouth of Chesapeake Bay. The 12- to 60-foot depths in this stretch will support the biggest fish.

Anglers in the Upper Midwest take their crappie fishing seriously, so don’t be so quick to scoff at those who might want to lay claim to a state-record fish. And Minnesota guide Brian Brosdahl knows just where to do it: the Upper Mississippi River.

“The waters are fertile, and they are deeper south of the Twin Cities,” says Brosdahl. “I think if the record falls, it will be somewhere between lock and dam 3 and the Iowa border.”

Read Next: 5 Tales of Extreme Angling

Brosdahl recommends any of the creeks, or slack-water pools during summer.

North Dakota’s current state-record perch mark, set in 1982, stands at 2 pounds 15 ounces. The huge fish was taken from Devils Lake, but bigger fish are there for the taking.

“I was with some anglers who caught some 2 ½-pound fish,” says guide Brian Brosdahl. “Those fish exceeded 16 inches.”

The state-record fish measured 15 inches. So the lake is producing big perch that are on the verge of toppling that mark.

Brosdahl recommends targeting the flooded roads and ditches in 4 to 6 feet of water. The biggest perch will tuck in close to the edges of cover to avoid predators such as northern pike.