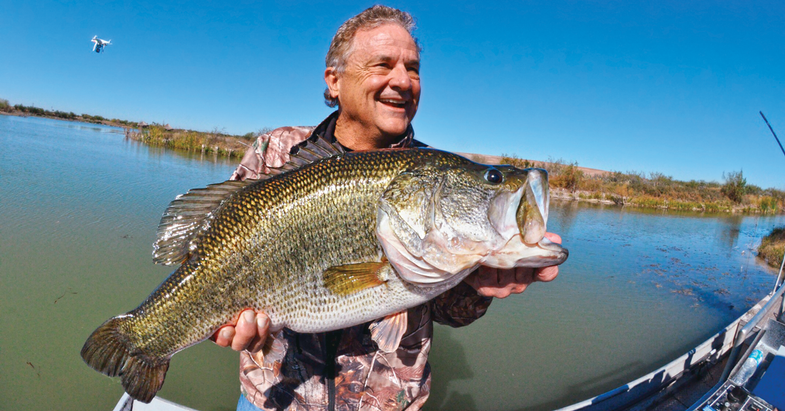 While most anglers don’t go to extremes to get to the fish they seek, Gary Schwarz has risked life and limb, literally, to grow the biggest largemouth bass the world has ever seen. The 64-year-old Texan is best known for creating Tecomate Seed, which revolutionized the approach to growing deer. Now, though, his focus is on bass. Big bass. And his motivation is simple.

“The largemouth bass is as American as apple pie and baseball,” says Schwarz. “It just doesn’t seem right that the world record is in Japan. So, for the sake of national pride, I sure hope we can produce a fish that will bring the title back to the U.S.

“I learned through my many years of growing deer how important proper nutrition is to the growth of trophy animals. Bass are no different.”

So, Schwarz developed what he calls “food plots for bass.” He built large forage tanks above his trophy bass lake (La Perla) and filled them with freshwater prawns. He seeds these giant shrimp several months apart in multiple stock tanks so he can flush them into his bass lake at different intervals during the year.

“Based on my first couple of years using the prawns, our growth rates are off the charts,” he says. Indeed, since 2008, several dozen double-digit fish have been caught out of La Perla Lake, with the biggest reaching nearly 14 pounds.

“Although La Perla is awesome, I decided that if I was serious about growing a world record, I needed to create a lake specifically for that goal.” So Schwarz spent a couple of years and countless dollars on his dream lake—Jalisco—and it almost cost him his life. While on an excavator digging part of the lake, Schwarz fell and his head hit on the steel track of the machine. It left a gaping head wound.

“I stuck my finger in the hole and felt my own brain. I knew that was not good.” Although the accident required months of recovery, recover he did—without loss of focus on his goal.

To make sure he had the best genetics available, he entered into a contract with the Texas Parks and Wildlife Department to stock the lake with fingerlings from the state’s ShareLunker program, which means that all the fingerlings in the lake had a mother that weighed 13 pounds or more. The kicker: The contract states no one can fish the lake for 15 years.

“I know it sounds crazy. I might have put a million dollars into building this lake, and I may not get to fish it before I die. But I want to see if my forage pond concept will work.

“I want to bring the record back to the U.S. very badly, but I am realistic. You take one giant step forward and then two small steps back. That said, we recently electro-­shocked Jalisco and had incredible results. The contract fish are now 20 months old, and we had several weigh in at 4 pounds. That sort of growth is unheard of.

“If La Perla and Jalisco can play a part in bringing the record back to the U.S., it would do my heart proud. And I don’t mean that the fish will be caught out of one of these lakes. Hopefully the research we are doing on the importance of genetics and forage will help lake managers improve fisheries all across the U.S.”

Gary Schwarz’ Jalisco Lake (above) measures 60 acres at full pool and is designed to push the limits of largemouth bass management. It is stocked with a specialized strain of pure Florida largemouths, and its fish subsist on natural forage supplemented by prawns. The lake’s structure includes:

Artificially created brush piles and areas with submerged timber give prey species cover to hide in and largemouths places to attack from.

Jalisco’s original shoreline has been flooded, but its rocky, riprap-like character remains. This, too, provides fish with cover.

Schwarz has added at least 30 feeders in various spots around the lake in order to keep bluegills and shad fat and happy.

Forage ponds
Three large prawn-rearing ponds are located adjacent to Jalisco. The prawns, seeded in the larval stage, can grow to more than 12 inches in overall body length. Once the prawns have matured, they are regularly flushed into the main body of the lake.