Most readers of outdoor writing know a good deal about Ernest Hemingway. But for those of us who want to... 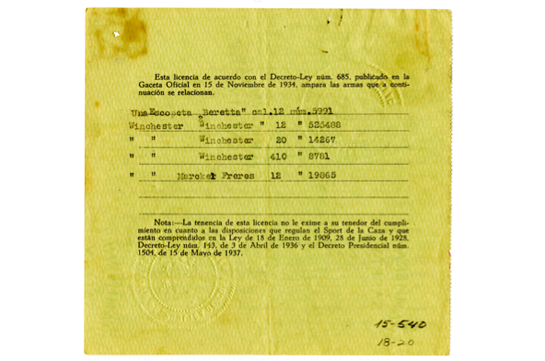 Most readers of outdoor writing know a good deal about Ernest Hemingway. But for those of us who want to find out the details — like for example what Mary Hemingway’s favorite hamburger recipe was — there’s good news coming from the John F. Kennedy Presidential Library and Museum in Boston.

More than 2,500 documents collected from Hemingway’s farm outside of Havana have been newly digitized and made available at the museum, according to a story yesterday by The New York Times.

What makes the collection all the more interesting is that Hemingway seemed to be a hoarder, saving everything from Christmas cards to tickets to bullfights to the Cuban gun permit pictured above.

The digitized copies arrived last year and are the second round of material to be added to the collection. An earlier batch in 2008 contained even more letters and manuscripts, according to the Times.

More highlights from the collection include:

– One of the most extensive existing logs of ‘Pilar,’ Hemingway’s fishing boat

– Books from Hemingway’s private library, many with the writer’s handwritten notes in the margins

“There’s no real bombshell in the new material,” Sandra Spanier, the general editor of the Hemingway Letters Project, told the Times. “The value is in the texture of dailiness, the way it rounds out our picture of Hemingway.”