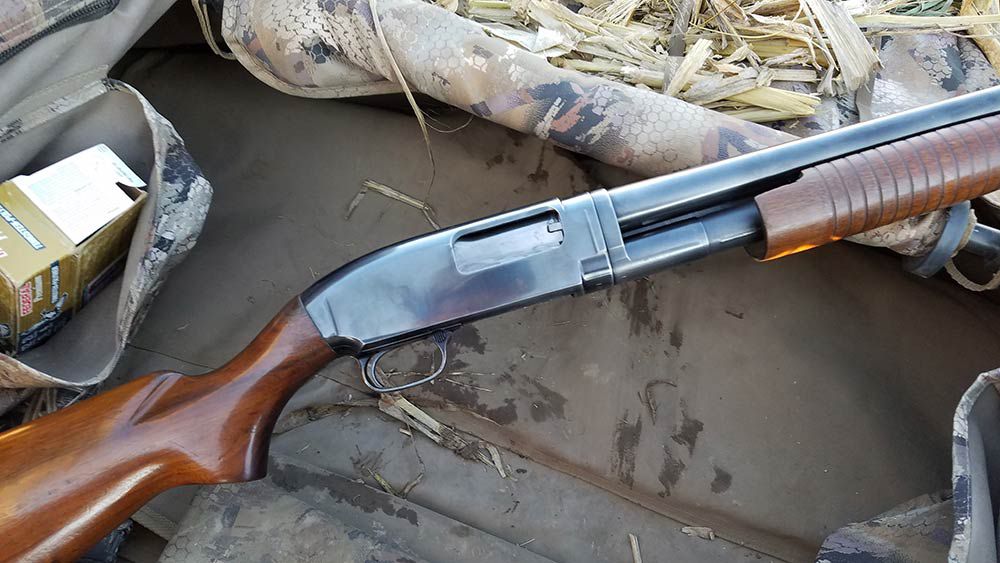 By the late 19th century repeating shotguns had gained favor among hunters and target shooters alike. But some game-changing innovations came along from 1900 to 1920. Single and double-barrel break-action shotguns were still flying off hardware store shelves. But the genius of John Browning would once again change shotguns forever. The development of the Auto-5 put a stranglehold on the shotgun market and it became the most iconic autoloader ever produced. Winchester’s Model 12 was no slouch either. It was arguably the most widely sought-after pump gun for decades, until the Remington 870 came along.

Here is a look at the shotguns that defined the first 20 years of the 20th century, plus a shotgun that would have been better left on the cutting room floor.

Talk about someone who never rested on his laurels. Browning had just designed the first highly successful pump-action shotguns with the models 1893 and 1897 when he began working on the semi-automatic shotgun in 1898. With patents accepted in 1900, a new era began with the Automatic-5.

Browning’s shotgun would show the world that new technology was coming fast and everyone best be ready. Winchester Repeating Arms had first crack at the gun because of their long-standing relationship with Browning. In what had to be the greatest mistake in firearms history, Oliver Winchester would not grant royalties to Browning. He only wanted to buy the design outright, as he had in the past. Browning knew what he had, and wouldn’t budge on the terms. You can hardly blame him. The Auto-5 revolutionized wingshooting and is still a damn accurate deer gun.

Browning turned to Remington to manufacture his shotgun, but that deal fell through as well. So Browning packed his bags and headed overseas to Belgium. Fabrique Nationale (FN, which is now the parent company of Browning and Winchester) of Herstal got the honor of producing the first A-5 shotguns.

Remington got their chance to make the coveted design with a licensing agreement in 1905; their version was named the Model 11. Around 850,000 of the Remington guns were made up until 1947, when the Model 11 was discontinued in favor of the 11-48. Remington also built the war time Browning’s while Belgium was in World War II turmoil (the Germans took over their factory). FN continued to crank out A-5s in 1952 and did so until Browning moved the gun to Miroku factories in Japan in 1975. Deemed too expensive to manufacture, the A-5 was dropped in favor of the Browning Gold 3.5-inch gas-operated design in 1998.

Winchester dropped the ball with the Auto-5, but the company hit a mammoth home run with the Model 1912. T.C. Johnson was back in 1912 with a vengeance after the ultimate failure of the 1911 SL (which I’ll get to later), with this pump shotgun earning a reputation as “the perfect repeater.” Anyone who has handled a Model 12 in any gauge will tell you that the magic of this gun lies in its ergonomics.

Its design compliments the strengths and abilities of most shooters and minimizes their limitations. The Model 12 does that with a combination of stock design, balance, and the inherent accuracy benefits of the slick pump-action operation. In simple terms, the gun points where you look.

Johnson borrowed some elements from Browning’s 1897, but a huge change was the enclosed internal hammer. There was no need to cock or lower a hammer with cold hands anymore; the gun was ready to fire after the round was chambered. It was a step forward in safety even though the early guns could still be slam-fired by holding the trigger down and pumping the action.

Around 2 million Model 12s found their way into sportsman’s hands for hunting, skeet, and trap. One of the most famous Model 12 aficionados was Ernest Hemingway. The author owned several in his lifetime, purchasing his first in 1928. Hemingway took the gun to Africa in case he needed to dispatch wounded leopards, among other tasks.

As popular as the Model 12 was, Remington actually beat Winchester to the internal hammer pump shotgun with the introduction on the Model 10 in 1908. John Pedersen designed the gun with a tubular magazine and bottom ejection. Bottom eject pumps would become popular with the elegant Ithaca Model 37, but they were unknown before Remington’s offering.

The Model 10 shotgun was never widely popular but a limited number of them designated as the 10-A found their way into World War I service. These guns sported 23-inch barrels covered with wooden heat shields and bayonet lug adapters. Only 3,500 were built, so an original condition 10-A is highly collectable and quite valuable.

This shotgun was more notorious than famous. It took engineer Thomas Crossley a full 10 years to come up with a gun outside the patent infringement of the long action recoil-operated mechanism similar to Browning’s Auto-5. The drawback of the Winchester’s Model 1911 SL was that it wasn’t nearly as safe to operate: the dangerous design required shooters to load it by pushing the barrel into the receiver.

You are always supposed to point a gun in a safe direction, but people have been severely injured or killed by manipulating a 1911 shotgun barrel when an accidental discharge occurred. Many times, this discharge was caused by a paper shell swelling and jamming in the receiver, and the gun’s operator trying to clear that jam with the gun pointed at their own face. Never a good idea. As a result, the SL became known as the “Widowmaker.”