The .222 Remington Inspired Some of Today’s Most Popular Rifle Cartridges. Here’s Why It Failed 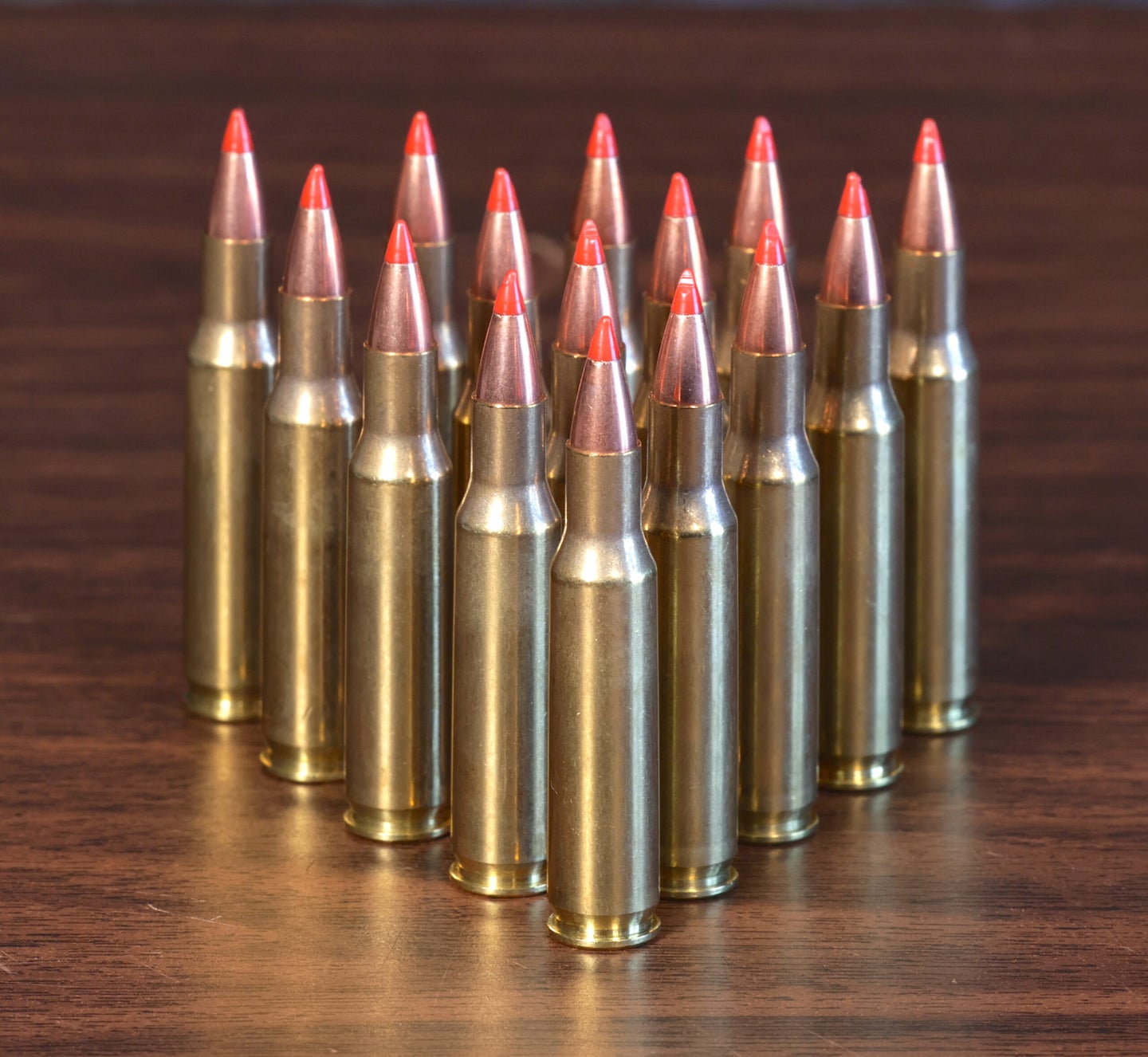 There was once a cartridge called the .222 Remington. It was created in 1950 out of whole cloth (no parent cartridge) by Mike Walker of Remington. Mike’s baby went on to become the darling of official benchrest competition, something else Walker created.

The diminutive “triple deuce,” as many called it, set accuracy record after record until Mac McMillan poked a 100-yard, five-shot, one-hole group in 1973. It officially measured .009 inches, a world record that stood for 40 years.

Not bad for an obsolete cartridge.

The .222 Remington was the 6.5 Creedmoor of its day, but has since run its course. It’s old news, pushed off the throne and out into the cold by the very family it begat.

If you’re under the age of 40, you may have never seen, let alone shot a .222 Remington. Which seems odd because this little cartridge was once ubiquitous. And it did more than punch small groups in paper. It was a fox hunter’s best friend. From prairie dogs and woodchucks to crows and coyotes, the .222 Remington was king. It drove a 50-grain bullet 3,240 fps, a 55-grain 3,200 fps and a little 40-grain 3,580 fps. Many hunters used it on deer and feral hogs. In the hands of subsistence hunters, it felled a surprising number of moose and caribou. And if that weren’t enough, you could get all this performance by burning just a thimbleful of BL-C2 powder. About 25 grains would do the trick.

The triple deuce became more popular than the .22 Hornet, which was 500 to 600 fps slower, and the .220 Swift, which was 600 to 700 fps faster. Who doesn’t appreciate a cartridge that’s inexpensive to shoot, offers long barrel life, is deadly accurate, generates almost no recoil, and has enough reach for sane shooting distances? Well, most of us, as it’s turned out.

Shop for a new rifle chambered .222 Remington these days and you might as well be looking for a .244 Remington or .225 Winchester. Virtually no manufacturer chambers for .222 Rem. anymore. What happened? The 223 Remington was invented.

Like princes of yore who murdered their fathers to become King, the .223 Remington killed off the parent that had spawned it. But it didn’t act alone. Patricide runs rampant in the .222 Remington family.

The first nail in the coffin was driven by Remington’s own variation of the .222 Rem. They called it the .222 Remington Magnum and introduced it just eight years after the .222. The cartridge is a stretched version of the .222, designed to win a contract as a new military round. The Army rejected it, so to recoup their R&D expenses, Remington unleashed it on the sporting public. The slightly longer case (.150-inch) and shorter neck provided enough additional powder space to boost .222 Rem. velocities by another 100 fps.

The Army, meanwhile went on to design and adopt the minimally different 5.56×45. Remington was prescient enough to grab this stretched version of their .222 and commercialize it. They unleashed it in 1964 and called it the .223 Remington to provide a little breathing room among the family titles, even though it shot the same .224-inch bullets as its parent. Somehow, despite being a hair shorter than the .222 Rem. Mag., the .223 manages to push the same bullets to the same speeds (SAAMI specs 55,000 psi for both, although the .222 is limited to 50,000 psi for some reason). Figure 3,280 fps for each with a 55-grain bullet, according to Berger Bullets Reloading Manual, 1st Edition. Nosler’s Reloading Guide 9 gives the .223 another 40 fps or so, but doesn’t even cover the .222 Rem. Mag. It’s even deader than the 222.

Why the .223 quickly dominated both its predecessors is rather obvious. It was not fatter. It fit the same rifle actions and magazines. It shot the same bullets slightly faster. But once the military adopted it, the die was cast. Brass popped into circulation like popcorn. If for some odd reason you didn’t like the 3,300 fps speed a .223 could give a 55-grain bullet, you could load it down to the 3,100 fps of the .222 Rem. and have the best of both worlds. And when the military started working with fast twist barrels and 63-grain and eventually 77-grain bullets, the 5.56x45mms versatility sealed the .222 Remington’s fate.

A Shot of Fireball

While the .223 Rem./5.56 NATO was the biggest factor in the death of the .222 Rem., there was another .222 offspring contributing to the patricide. Hatched between the .222 Rem. Mag. and .223 was the abbreviated .221 Fireball. This little stumpy was tailored for Remington’s new bolt-action pistol, the XP-100. The short barrels (10.75 to 14.5 inches) of that handgun made it a fire-spitting dragon. The 15 to 20 grains burned in the .221 were more efficient. To make up for the lighter dose of powder, the Fireball was allowed higher maximum chamber pressures.

The little Fireball, blessed with one of the cooler names in the family, also shot .224-inch-diameter bullets. Remington undoubtedly chose the .221 designation just to help it stand out. This “system” of nomenclature must have driven shooters crazy. It still does. The European system of including case length makes more sense than throwing just any old number on the end of the caliber. But then the Euro-system makes for an inconvenient mouthful. Who wants to say “five point six by thirty-five point five six” when “two twenty one Fireball” is the alternative?

Regardless of its title, the .221 Fireball went on to spawn second generations itself. First was the .17 Mach IV wildcat which Remington belatedly legitimized as the .17 Fireball in 2007. This little spitfire takes advantage of the Fireball’s powder reservoir to drive a 20-grain bullet nearly 4,100 fps, and a 30-grain 3,500 fps. At either speed, varmints don’t like it, but shooters certainly do. Even in a light little 6-pound rifle recoil is less than 2 foot-pounds at just 4.4 fps velocity. While a pure delight to shoot, the .17 Fireball has limited applications, making it a definite close-range fox or coyote round and a longer range small rodent round if the winds aren’t too stiff.

Now even more famous is the .300 Blackout—a .308 bullet atop the skinny, shortened .222 Remington case. It sounds ridiculous at first blush, but when you realize 7- to 10-grains of powder drive a 220-grain bullet 1,000 fps, you begin to understand. This can be subsonic. Quiet. A military advantage now being used by feral hog exterminators at night. What many don’t know is that, even though the Advanced Armament Corporation designed this .300 in 2010, Remington acquired AAC and actually submitted the .300 Blackout to SAAMI so the round could be marketed commercially. Already more than 100 ammo companies are said to be loading this surprisingly popular adaptation of the .221 Fireball. By the way, a similar version called the .300 Whisper was concocted by J.D. Jones in the early 1990s, but it was and still is proprietary.

At the other end of the velocity spectrum are a couple of .222 members nearing, if not setting, commercial cartridge speed records. In 1971 Remington manipulated its basic .222/.223 platform brass to create the .17 Remington to drive a 20-grain bullet 4,300 fps, equaling what a .220 Swift does with a 40-grain bullet. The .223 case shoulder was pushed back slightly so the neck could be made longer. The shorter base-to-shoulder length of the .17 Remington chamber also prevents .223 Rem. rounds from being accidentally chambered and fired down that 17-caliber bore.

The 17 has never enjoyed a huge following, but it is an easier round to work with than many have been led to believe. The myth of excessive barrel fouling has been disproved many times with some varmint hunters maintaining good to excellent accuracy through 200 rounds, some 400 rounds. Wind deflection isn’t as horrid as claimed either. Set mid-range trajectory to peak 2 inches above line-of-sight at 150 yards and the bullet won’t drop 2 inches below LOS until about 290 yards at which point a 10 mph right angle wind will have deflected it just under 12 inches.

Of course, it’s only carrying 319 ft/lbs of energy at 300 yards, so as a fur-collecting round, it performs best to about 200 yards. Oddly enough, hunters experimenting with wildcat versions of the .17/222 Rem. in the 1950s and ‘60s reported devastating results on turkeys, javelina, whitetails, and even feral burros. With the 20- to 30-grain .177 bullets’ tendency to “explode” inside shortly after impact, fur remains in perfect condition, suggesting the .17 Rem. could be the ultimate tool for predator hunters. But it does have family competition…

In 2004 Ruger and Hornady resurrected the 222 Rem. Mag. long enough to reshape it into the industry’s only commercially-loaded .20-caliber. They called it the .204 Ruger, and it broke the Mach 2 barrier with a 32-grain bullet traveling 4,158 fps, according to Nosler Reloading Guide 9. This, still our only commercial .20-caliber centerfire, appeals to a lot of shooters enamored of the .17 Remington idea, but hesitant to go with a bullet that narrow. At .204 inches the .204 Ruger bullet splits the difference between the common .224s and suspect .177s. Drops and drifts of a 40-grain, .225 B.C. Berger boat tail varmint bullet launched at 3,700 fps practically mirror those of a 55-grain .22-250 Remington out to 300 yards, making the .204 Ruger yet another impressive round for predator hunting. And yes, recoil in a 7-pound rifle is soft enough to caress a sleeping kitten without waking it at just 3.38 ft/lbs at 5.57 fps.

An additional value in all these .222 Remington extended family members is frugality. When you get 3,000 to 4,300 fps muzzle velocity with 25 grains of powder or less, you burn through a lot less powder than you do shooting cartridges that gulp two and three times more per shot. The tiny bullets sell for significantly less per unit than 100- to 200-grain bullets, too.

Shuffle through reamers are gunsmith shops across North America and you’re liable to find many more wild variants of the .222 Remington, the wildest of which is the .14-222 Rem. Yes, a 14-caliber. I hunted jackrabbits with one once. But crazy as that sounds, there were reportedly even some 12-caliber versions. Can’t be fun trying to handload those.

A cartridge case as well designed as the .222 Remington has been swept into the dustbin of history, but just remember, the next time you kill a coyote with a .223 or hog with .300 Blackout it was because of the birth of the .222.