.22 Rimfire Handgun Drills That Will Improve Your Marksmanship

How to use a basic .22 LR pistol to improve your handgun shooting skills 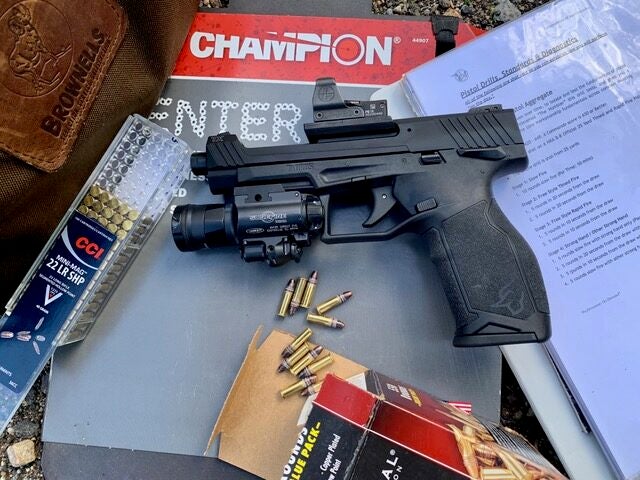 A .22 LR rimfire pistol can hone a shooter's handgun skills for a fraction of the ammo cost. Chris Mudgett
SHARE

Given the ongoing ammo crunch we’ve all suffered over the last year or so, there aren’t too many of us willing to expend our precious centerfire pistol ammunition to keep the ole pistol skills sharp. While many casual and newer shooters weren’t ready for an ammunition shortage, those of us who’ve been around for the last decade or so learned this lesson the hard way when it came to the availability of .22 LR ammunition and, accordingly, spent the last 10 years stocking up. Shooting season is here, and now is the time to blow the dust off that .22 LR ammo get to practicing again before the next crisis hits.

There are a ton of marksmanship and manipulation drills that can be built upon with a .22 trainer, such as the Taurus TX22 Competition, or Ruger SR 22. A trainer is an excellent tool for learning the footwork required to efficiently shoot on the move, move laterally while shooting and for practicing positional shooting techniques. It’s also a great tool for improving the mechanics of your draw, marksmanship at 25 yards and beyond, as well as target-to-target transitions and other movement skills. Essentially any drills and skills that do not require recoil management, such as rapid-fire strings, can be done with a .22 LR trainer and will effectively carry over to your centerfire carry pistol. Below are some of my favorites for quick range sessions to help build and maintain my pistol skills.

With a .22 LR trainer, I like to work on accuracy at 25 yards. I prefer to shoot at 5.5-inch NRA B8 repair center bullseye targets instead of silhouette targets, because of the ease of scoring. If you’re being careful with your cash, a cost savings option is a simple paper plate or blank sheet of printer paper. Use a Sharpie marker and give yourself a refined aiming point, which is my preference, as I like to put new targets up often to better hold myself accountable. If you don’t think your marksmanship is up to snuff at 25 yards yet, then start at fifteen yards and work your way out—but do yourself a favor and don’t move closer than that when you’re focusing on accuracy. Distance magnifies issues and staying at least 15 yards from the target will help you identify marksmanship problems. If you stand at the 5-yard line, you aren’t accomplishing anything other than feeling good about yourself, which leads to a false sense of ability. Once you’ve built your confidence at 25 yards, hang an IPSC target at 50 yards with the goal of keeping all of your rounds within the A-Zone of the torso.

After firing 10-shot slow-fire accuracy drills, I move onto more difficult pistol manipulations. If you are carrying your pistol in a holster at the range, part of your accuracy standards can be coming out of the holster for each shot. I like to practice my draws with 10-shots for accuracy. This is a great way to work on your draw without sacrificing accuracy. I move my hand to my pistol as fast as possible, acquire the perfect shooting grip, then slowly and methodically move through the rest of the draw culminating in a slow, deliberate shot. The distance to the target should not dictate how fast you draw your pistol. At 25 yards, I can still move fast, draw and deliberately fire. Take the time to get a perfect shot; a smooth draw followed by a perfect shot is what you should be looking for.

Using belt-mounted magazine pouches, load three magazines with one round each. I start with the draw, fire one, reload, fire one, reload and fire one more. This allows you to get draws and multiple shots into your bullseye target. The reloads are done as quickly as possible, no stopping between magazines. If you have one, use a shot timer to gather data on the speed of your draw and splits between reloads. You should still be holding yourself accountable for accuracy, but moving as fast and efficiently as possible. This should be 5 to 10 yards from the target depending on your skill level and will greatly improve your mechanics and hand speed.

I like to load three magazines to capacity, which is 10 rounds each. Place two target stands 10 to 15 feet apart, if space allows,  If you can’t, place them as far apart as possible. The next several drills will incorporate the draw, driving the gun and reloads.

Read Next: The Best Rimfire Rifles

Using the same two targets, fire two rounds per target until you have fired all ten rounds, reload, reassess and repeat. Shooting two rounds per target allows your brain to process firing multiple rounds before reholstering. I also like to draw and fire 10 single shots, alternating between the two targets downrange, instead of always engaging a target directly in front of me.

Load two magazines with five rounds per magazine. The next drill is intended to focus on strong-hand and other strong-hand accuracy; this is how I like to conclude my training sessions. Always incorporate a draw, if possible. Fire a five-shot group for accuracy with the strong hand only, followed up by a five-round group for accuracy with the support hand. I like to only shoot five shots whether strong or weak side because of the concentration required to accurately put rounds on target. A smaller round count increases my overall stamina at the range.