Andrew Plumridge set out on the Housatonic River for his second-ever fishing trip last week. He returned with a 32-pound... 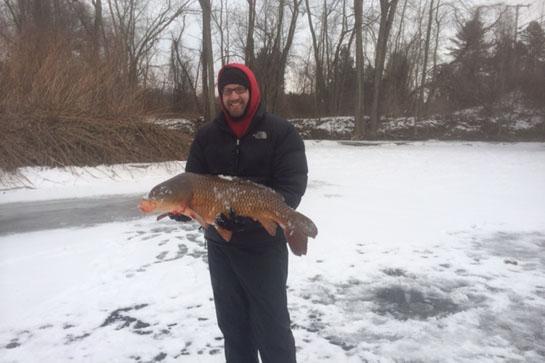 Andrew Plumridge set out on the Housatonic River for his second-ever fishing trip last week. He returned with a 32-pound common carp and a pending ice fishing world record.

Plumridge, 41, hit the river with three buddies and fishing guide Paul Tawczynski on Jan. 31 near Sheffield, Mass., reports the Berkshire Eagle. The group caught just three fish that morning and waited six hours for another bite. But it was worth the wait, and after a 30-minute struggle Plumridge succeeded in landing the giant carp.

“We had that fish to the hole probably 15 times,” Tawczynski told the Berkshire Eagle. “Every time we got close enough to touch it made a run of about 10 to 15 yards. Finally, it got tired and laid down by the hole where I could pull it up. There was absolute elation from everyone on the ice.”

The carp is the second fish Plumridge has ever caught. It measured 35 3/4 inches and weighed 32 pounds 2 ounces.

“My first reaction was I can’t believe that fish made it through that hole,” Plumridge told the newspaper. “[Tawczynski] must have squeezed the fish to get it through.”

Tawczynski reports there are plenty of carp in the Housatonic river, but they average between 6 and 12 pounds. The largest common carp ever caught in Massachusetts weighed 46 pounds 5 ounces and was caught on Lake Quinsigamond in 2012, according to the state Department of Fish and Game. Fish submitted to the Hall of Fame’s catch-and-release category are judged by length rather than weight. Their largest all-tackle common carp measured 43 inches.