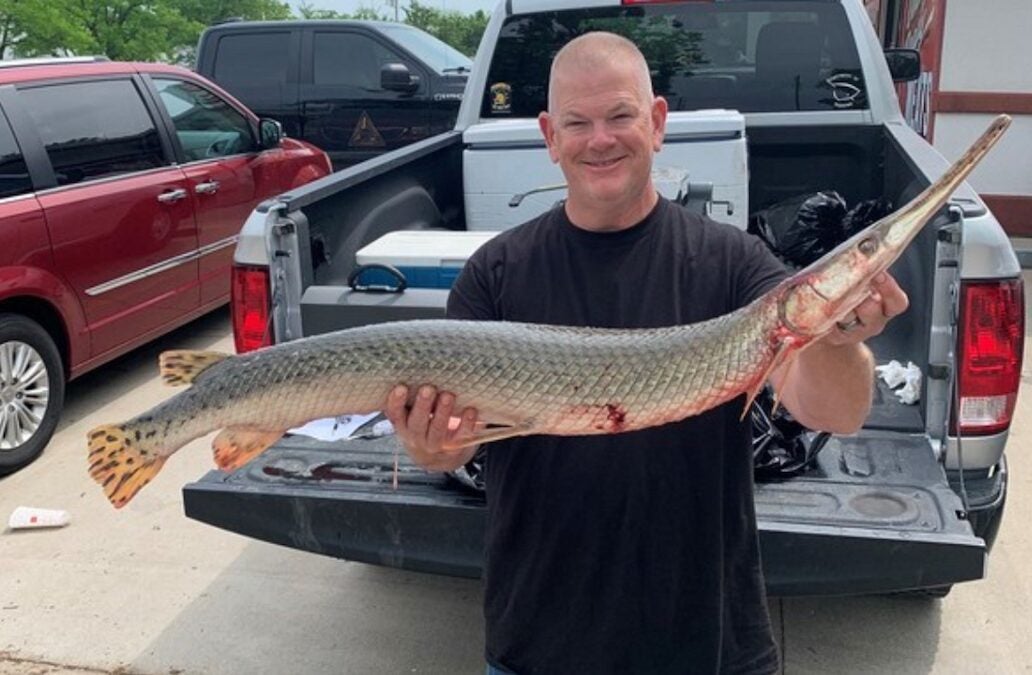 This gar is big enough to replace both the state and world records for the species. Rich Porter / MDC
SHARE

Update: The Missouri Department of Conservation announced on Monday, Aug. 22, that Rich Porter’s pending state-record shortnose gar was misidentified. Subsequent genetic testing by a Missouri university showed that Porter’s fish was not a pure shortnose, and the MDC said that “additional testing is underway to determine the species of the fish.” The agency added that the current shortnose gar state record set in 2006 still stands.

Aug. 18, 2022. A Nebraska man shot a monster shortnose gar in Missouri’s Lake of the Ozarks back in May. On August 17, the Missouri Department of Conservation congratulated Rich Porter of Omaha, Nebraska, for officially setting a new state record for the species. The department also noted that the gar is big enough to beat out the standing bowfishing world record.

Porter was on a friend’s boat when he shot the gar on May 16. He said they were at the final fishing spot of the day when he arrowed the record fish, which weighed a whopping 14 pounds, 6 ounces, according to the MDC. The state agency also conducted genetic testing to be sure the fish was truly a shortnose gar and not a hybrid.

“Shortnose gar usually only weigh three to four pounds,” said Porter. “So, to catch one that big, we thought it was a longnose.”

Missouri’s fishing records book has categories for both pole-and-line and alternative methods, which include bowfishing and spearfishing. Porter’s shortnose gar will replace the previous state record in the alternative category—a 13 pound, 1 ounce shortnose that was taken from Mark Twain Lake in 2006. It also outweighs the current pole-and-line state record by more than six pounds. That state-record gar was caught by George Pittman in 2010, and it just so happens to be the current IGFA all-tackle world record for the species.

“I’m a long-standing member of the Bowfishing Association of America, so to catch a gar of this size is very exciting—it’s something else,” said Porter.

Shortnose gar are common in Missouri, which is also home to spotted gar, longnose gar, and alligator gar. Gar are not considered a gamefish in the state, but they serve a valuable role in preventing imbalances in the ecosystem, according to the MDC.