Important Items to Add to Your Every-Day-Carry Survival Keychain

The idea behind every-day-carry (EDC) gear is to not get caught with your pants down: Regardless of the scenario, you... 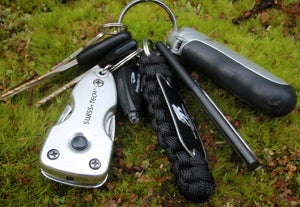 The idea behind every-day-carry (EDC) gear is to not get caught with your pants down: Regardless of the scenario, you have something in your hands to work with. You might not always have the perfect tool for the situation, but at least you have something for when Murphy draws your name out of his hat.

So why not take a second to prepare for success and continued survival, by adding useful gear to something that almost everyone carries–a keyring.

For starters, you should have a light source. Whether you are in the country or the big city, nighttime can create a variety of problems for those who do not have light. A small flashlight on your ring can come in rather handy when the lights go off.

Next, you’ll want a tool of some kind. A small folding knife or a mini multi-tool can be a huge asset during daily tasks and survival chores alike.

A fire source is next on my list. A spark rod will work, but I’d feel better with an actual flame. Bic makes a mini lighter in a metal case that can be added to a keyring. The lighter serves as both a fire source and a backup light source.

Signal items are another important piece of gear. While they are not as macho as the knife and lighter, signaling for help with a loud whistle is the undervalued action that is most likely to get people rescued.

Cord is another unsung hero among EDC gear. One of Survival Straps’ Key Fobs will give you about 7 feet of high-quality 550 cord. Each length of 550 gives you seven inner strands of cord, plus the sheath acts as a cord, giving you over 50 feet of useable cordage.

A compass is a great add-on for a survival keychain, but you’ll have to make it detachable, as the metal in the keys and other items will cause the needle to misread.

The lucky seventh item for your survival keyring could be a knife sharpener. The best of the bunch is the SOG Sharpener and Fire Steel combo. This tiny three-function tool has a flat diamond sharpening pad, a cylindrical ceramic sharpener for knife serrations, as well as a fire-starting spark rod.

Of course, there are as many different EDC items as there are reasons for carrying them. We’d love to hear about your key chain gear ideas in the comments.