One of smallest and most portable hunting tools that we still have from ancient times is the sling. A bit... 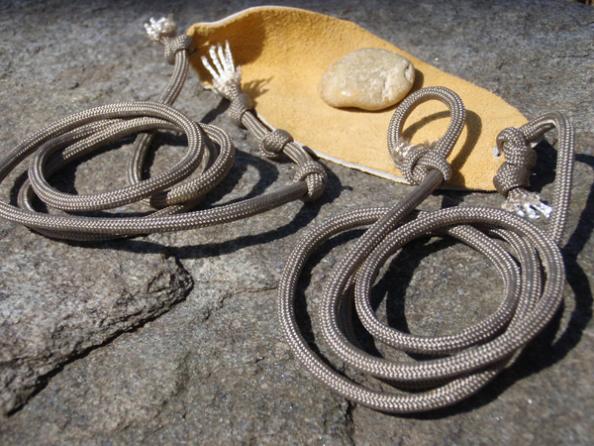 One of smallest and most portable hunting tools that we still have from ancient times is the sling. A bit of string, a patch of cloth or leather, and some round stones are all the equipment required for slaying rabbits or the odd Goliath. The sling is easy to make, and ammo is literally everywhere.

But note that I said didn’t say using a sling is easy. If you grew up with this weapon as a plaything, you probably have thrown thousands of stones and have an instinctive feel for targeting with this weapon. If you are new to throwing a sling stone, you ought to consider wearing goggles and a helmet until you get the hang of it.

To make your sling, cut two lengths of cord, each 2½-feet long. Paracord is fine, but you could use almost anything. Tie a bowline knot in the end of one line, with a loop big enough to slip over your thumb. Tie three or four knots at the end of the other line. Figure eights or overhand knots will suffice. Cut a football-shaped piece of cloth or leather about six inches long and three inches wide. This will be your sling pad. Pierce a hole at either end of you sling pad, where you will attach the unknotted ends of your two lines. Use good, tight knots so your sling doesn’t fly apart while in use. Two half hitches with a stopper knot is a good choice, or at least an overhand with a stopper knot as pictured.

The sling is complete at this point, so now comes the hard part: hitting your target.

Place the bowline loop over the thumb on your throwing hand. Hold the knotted line end between your thumb and palm. Load a rock into the sling pad. Make sure you’re holding the knotted line in your palm so that the sling pad is cradling the stone level and even, like a hammock. Now you’re ready to throw. Try some easy overhand throws first, releasing the knotted line at just the right time to allow the rock go sailing. Once you have a feel for the proper release of the knotted line (which is essentially your trigger on this weapon), you can try a few overhead circles with the sling to add more energy to your throw.

Using a sling can take years to master, as you try to instinctively calculate the zenith and azimuth of your target, how much strength to use, the trajectory of the projectile, and the wind each time you throw a stone. It’s a lot to actively think about, but with enough practice you can do it.

Ever made or used a traditional sling like this? Did you accidentally bean the guy standing behind you? Give us the dirty details in the comments.