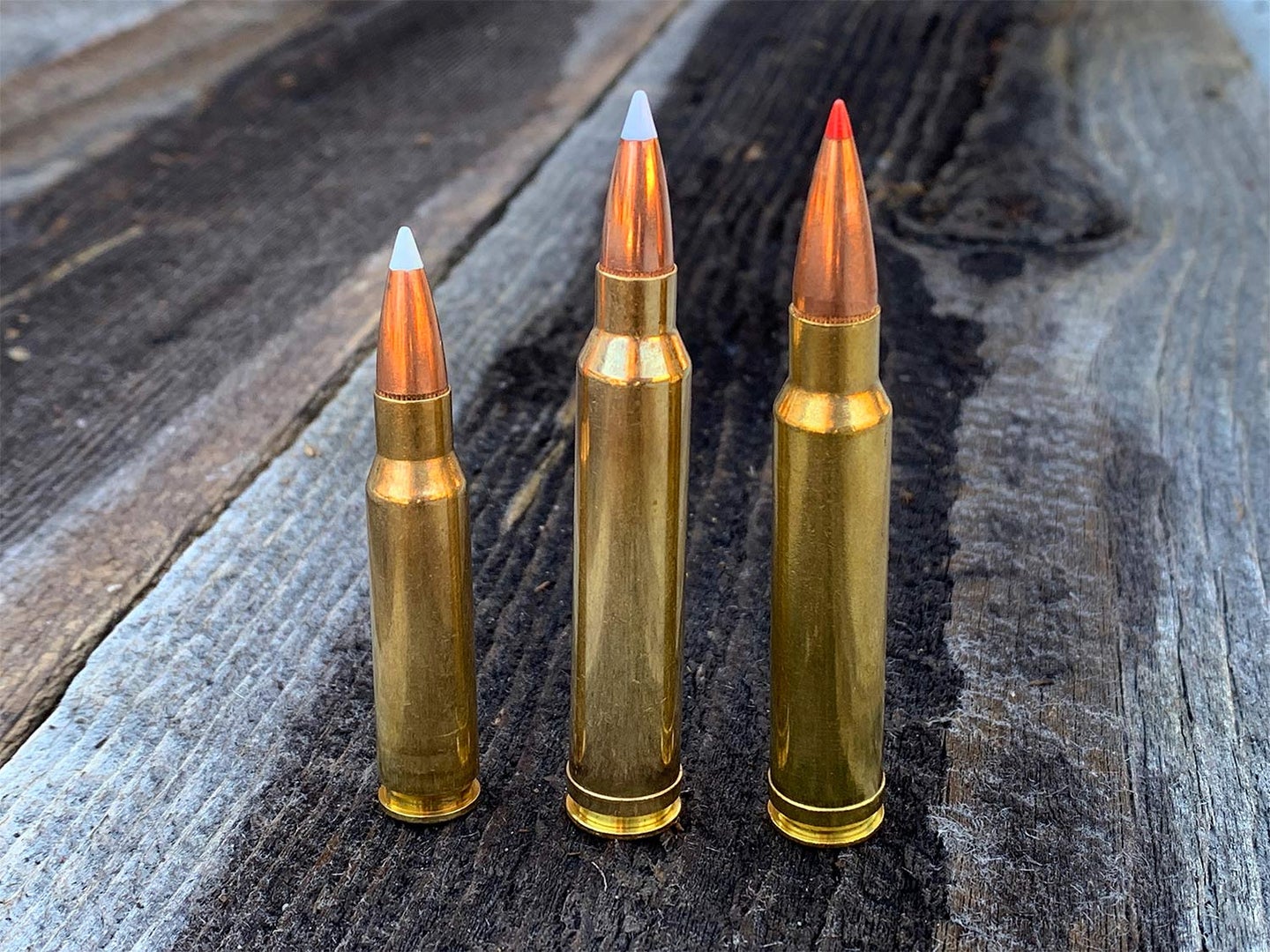 While a few hunters insist that they know the best cartridge for elk hunting, most of us are still searching.

The problem seems to be that we discard any rifle/cartridge that fails to anchor the last elk we shot at, bang flop, dead right there. This is the wrong approach. As veteran elk hunters and guides can tell you, not every 500- to 800-pound elk responds to invasive projectiles the same way. One falls dead from a puny 100-grain bullet fired from a .243 Winchester while the next absorbs three 180-grain bombs from a .300 magnum before collapsing.

Variable response to impact—regardless of caliber and energy level—is what keeps us searching for the holy grail of elk cartridges. Wise hunters leaven this search with the knowledge that bullet construction plays a major roll in this and that no shoulder-fired rifle/cartridge/bullet is guaranteed to knockout any elk unless you strike the central nervous system. Do that, and even a .22-250 Remington will suffice, as many Montana and Idaho elk hunters have proven. (Yes, most .224 centerfires are legal for elk in those states and several more.) But that doesn’t mean we’re recommending any .224 as the optimum elk cartridge.

Actually, we’re not recommending any cartridge as the ideal elk round. Instead, we’ll compare three suitable rounds, outlining velocity, drop, drift, recoil levels, and factors like cost, ammo availability, and rifle size and weight so that you, gentle reader, can make your own decision. A fast-handling, short-range rifle suitable for heavy forest hunting isn’t ideal for precision shot placement hundreds of yards across a mountain meadow. And a heavy, precision magnum with a 28-inch barrel isn’t all that fun to carry and operate in the dog-hair timber stands elk often call home. Essentially we’re helping you shop for a cartridge that provides what you want and need for your style of elk hunting.

Some will complain that we’re comparing apples and oranges, but we’re not. We’re comparing three cartridges that are widely and successfully used to invite elk home for dinner. Because each is celebrated and acclaimed by fans, it’s fair to compare their performance so that discriminating readers can make informed decisions on what might work best for their type of elk hunting. Let’s start with descriptions, a bit of history, and some performance parameters for each.

The advantages many shooters like about the .308 Win. include the light, compact, short-action rifles in which it can be chambered; the variety and abundance of relatively inexpensive factory ammo; and relatively light recoil. In a 7-pound rifle, a 180-grain bullet at 2,600 fps should punch your shoulder with 22.7 ft-lbs of energy at a velocity of 14.45 fps. You can, of course, shoot 150- and 165-grain slugs in the .308 to minimize recoil even further, but you’ll give up penetration potential due to lower sectional density and mass. A lot of weight in the shank behind an expanded nose is what pushes bullets deep. You could also handload 190- to 200- grain slugs for even more penetration potential, but that will increase recoil and long-range drop. It’s a good close range, heavy cover option, though.

Zero a 180-gr. Accubond 4 inches high at 100 yards and it will peak just under 5 inches high at 150 yards and not drop 5 inches below point-of-aim until 320 yards. That should take care of the majority of an elk hunter’s responsible shot opportunities with no worries about hold-over.

This old warhorse is actually younger than the .308 Winchester by 11 years. Winchester concocted it by slightly shortening the .300 H&H Magnum’s belted case, taking out considerable body taper, and flattening the shoulder slope to 25 degrees. The resultant cartridge has an overall cartridge length of 3.34 inches, the same as the .30-06. This made it easy for Winchester and virtually every other rifle maker to chamber this 30-caliber round in the same rifles they’d been building for the .30-06 and .270 Win. The .300 Win. Mag. spits the same bullets as the .30-06, but 300 fps faster. That’s almost 500 fps faster than the .308 Win., so you can quickly appreciate the difference between them.

By throwing the same 180-grain Accubond bullet as the .308 Win. at a muzzle velocity of 3,150 fps, the .300 Win. Mag. adds considerably more punch and recoil. At 400 yards, the 180-grain Accubond is still packing 2,344 ft-lbs energy. That’s more than the .308 Win. hauls at 150 yards. But don’t get too enamored, because, again, a 700-pound bull elk can absorb 3,000 ft-lbs of kinetic bullet energy and hardly ripple. Kinetic bullet energy sounds impressive, but doesn’t translate as dramatically as you might think. Remember, for every action there is an equal and opposite reaction. If the gun doesn’t knock you down when you shoot it, how’s the little bullet it throws going to knock down a four-footed animal three times heavier? Unless it strikes the central nervous system (spine and brain) from the withers forward, a bullet kills by hemorrhaging, not blunt force trauma. Good nose expansion (mushrooming) and deep penetration (preferably pass-through to enhance leakage and simplify blood trailing.)

Fortunately, the mass and velocity of 180-grain, controlled-expansion bullets sent by a .300 Win. Mag. do create significant hemorrhaging. And remaining energy doesn’t fall below the 1,500 ft-lbs threshold until a ridiculous 700 yards. You pay for this downrange punch in a 7-pound rifle by absorbing 39.4 ft-lbs of recoil energy and 19 ft-lbs of recoil velocity. Some men, women, and children think this is no big deal. Others would rather go four rounds with a heavyweight boxer. You can always ameliorate felt recoil by carrying a heavier rifle, but most mountain hunters find hauling a 9-pound rifle more onerous than absorbing heavy recoil in a 7-pound or even 6-pound rifle for a split second once or twice a season. Life is a series of tradeoffs.

Thanks to its powder capacity, the .300 handles 200- and even 220-grain bullets quite easily. You get even more recoil, but more long-range energy on target, deeper penetration potential, and less wind deflection (so long as bullet form maximizes B.C. Going to a round-nose reduces downrange energy.)

While extra wallop has long been a selling point of the .300 Win. Mag., its extended reach is the more useful attribute. Zero this baby 3.55-inches high at 100 yards and those 180-grain Accubonds won’t rise more than 5 inches above line-of-sight (max ordinate is about 170 yards) and won’t fall 5 inches below line of sight until about 370 yards. In contrast, at .308 Win. muzzle velocities, this bullet drops 5 inches below line-of-sight at 320 yards. The Win. Mag. gives you 50 yards more reach. Hitting an elk five inches above or below center chest may not be perfect, but I can assure you it still catches vital tissue, lungs and/or heart. This gives the .300 Win. Mag. a significant leg up on its lesser .308 brethren.

The .308 Win. fans response to this? “Laser rangefinder.” And they are correct. If you can measure the precise distance to your target and know how to compensate for drop by turret dialing or holding over via a ballistic reticle, the .300 Win. Mag’s. flatter trajectory advantage pales. Dealer’s choice. Tolerate the heavier carry weight and/or recoil of the magnum or hike easy with the little .308 Winchester.

To the surprise of most, this potent round beat the .300 Win. Mag. to gun store shelves by five years. In 1958, the same year the Brooklyn Dodgers became the LA Dodgers and radios were playing Jerry Lee Lewis’s Great Balls of Fire, Winchester shortened and straightened the belted magnum case and necked it to hold a .338″ bullet. They actually necked down the .458 Win. Mag. case to do this because they’d already created that one by modifying the .375 H&H case. (Cartridge development is largely a matter of reshaping a few basic brass cases.)

Nosler’s ABLR 250-grain is rated with a ballistic coefficient of .575. According to Nosler’s handloading manual, 71.5 grains of H4831 powder should nudge that bullet from a 24-inch barrel at 2,780 fps. That’s good enough for 4,291 ft-lbs energy at the muzzle and 1,500 at 780 yards downrange. In short, don’t lose sleep worrying about sufficient energy from a .338 Win. Mag. But you might want to question your recoil tolerance because in a 7-pound rifle this beast slams your face and shoulder with 50 ft-lbs of energy at 21 fps! This is why few elk hunters carry 7-pound rifles in .338 Win. Mag. Step up to an 8-pound rig (the weight of the scope, rings, and sling count toward this total,) and recoil shrinks to 44 ft-lbs at 18.8 fps. Still too much? If you’re tough enough to haul a 9-pound rig up and down the Rockies all day for a week, that .338 will kiss you with just 39 ft-lbs of recoil at 16.7 fps. Sweet. That’s only 16 ft-lbs more than the .308 Win. puts out with a 180-grain projectile.

Of course, you can also reduce recoil by shooting lighter .338 bullets. At maximum muzzle velocity 225-, 210-, 200-, and 180-grain .338 slugs will shoot flatter than the 250s, but drift slightly more in the wind and retain less energy downrange. Again, I don’t think elk will notice, but penetration potential always suffers with lighter bullets of a given construction in any caliber. If you really want to pump up the penetration, try a 300-grain bullet.

Will a 300-grain, .338-inch diameter bullet at 2,400 fps flatten every elk hit by it? No. A bullet 0.03-inch wider than a .308 should make a wider wound channel, but the difference isn’t that significant. Neither is the on-target energy. So long as the bullet carries enough energy to expand, penetrate, and rip vital organs like heart, lungs, and liver, resulting blood loss should lead to a dead elk within seconds. Wider, longer bullets should increase wound channel diameter, of course, but whether this gain is worth the cost of recoil and carry weight is up to you.

Before wrapping this up with some ballistic charts you can study at your leisure, we will remind you that cartridge selection is not all about energy, muzzle velocity, and trajectory. Pragmatic concerns like rifle weight, recoil, balance, handling speed, and even ammunition costs play a role. Bullets play a huge role. Materials and construction being the same, a longer, heavier bullet will penetrate better than a lighter one. Soft-core, thinly jacketed bullets expand more than harder options, but might break up on major muscle and bone and never reach the vitals. Bullets that are too hard might not expand enough to create sufficient hemorrhaging.

Each of us must consider and rank these performance limitations according to our standards and needs. Many hunters have discovered that their chances for felling an elk increase with a .308 Win. because the less expensive ammo and recoil encourage them to practice and train more often so they don’t miss. Others learn that a lighter, shorter rifle helps them stay in the field longer and hike farther, finding the elk. Still others figure that recoil doesn’t bother them, they don’t hunt at high elevation, and the longer reach of a magnum is of more value than a light rifle in a “weaker” caliber. Whatever you choose, hunt honest and shoot straight.