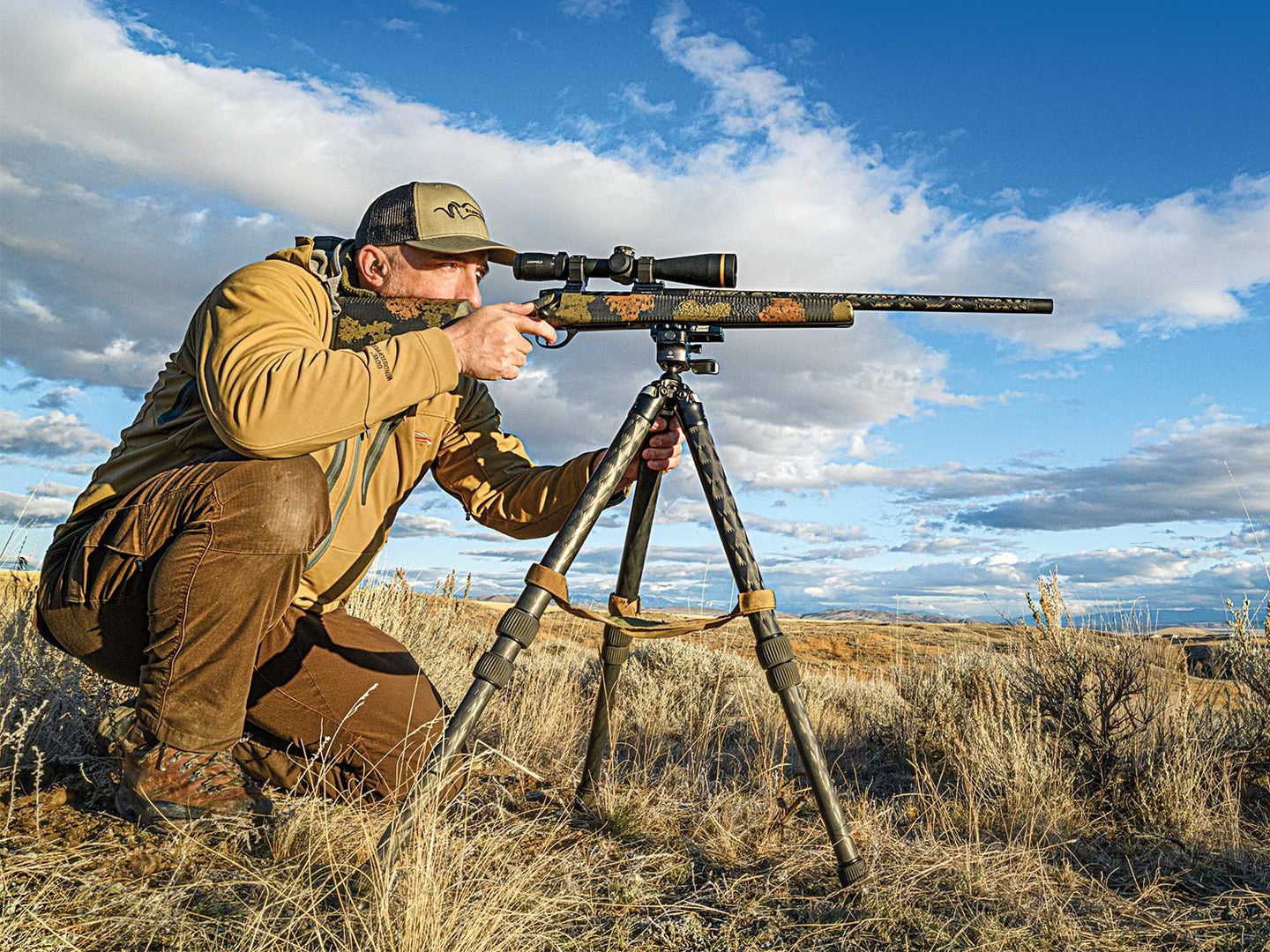 This is a topic I’ve pondered and one that my friends and I have kicked around plenty. We’ve discussed it while passing a flask back and forth in the Alaska Range. We’ve talked it over while glassing for mule deer in eastern Montana. Some of my most productive brainstorming sessions have occurred after rifle matches where my buddies and I compare notes on the newest gear and innovations and how they could be incorporated into our hunting kits.

Over the last decade, I’ve seen gun companies attempt to answer the question with firearms that combine elements of traditional hunting guns and long-range target rifles, often with mixed success. Adding a heavy barrel and an adjustable stock—two of the most common alterations—doesn’t get you there. Although accurate, these rifles often handle like a hippo in a wading pool. As much as I value tight groups, ergonomics still matter, as do portability and even aesthetics.

So, about a year ago, I set out to design my own hunting rifle that gave proper emphasis to these often-overlooked attributes. I worked with a number of companies to pull this together—some of which you probably know, like Defiance Machine, Proof Research, and Manners Composite Stocks, as well as others you might not be familiar with. I tapped the talented crew at Divide Gun Company, a small rifle maker out of Salmon, Idaho, for the final execution of the project.

This rifle has some serious competition features in its DNA. Considered individually, each of those elements has merit, but the bigger takeaway is that I wanted to design a rifle that integrates more effectively with the other gear that a serious open-country hunter carries and uses.

Balanced Cartridge: Is there a better cartridge for long shots on big-game animals than the 6.5 PRC, a relative newcomer to the scene? I say no, but with the caveat that there are many excellent rounds that merit consideration. What the 6.5 PRC brings to the party is balance and a design that maximizes potential accuracy. It is about 200 fps faster than a 6.5 Creedmoor, so it has a bit more horsepower than that fine round, but when compared with traditional magnums has less recoil and is more pleasant to shoot. The broad selection of excellent 6.5mm bullets for both hunting and target use gives a shooter a lot of latitude when picking a load, which sealed the deal for me.

Mid-Length Action: This rifle is built on a competition action that’s been modified for hunting. Made by Defiance Machine, the world’s foremost producer of precision rifle actions, it is an XM model, which puts it between a short-action (SA) and a long-action (LA) in length. While the 6.5 PRC can function in an SA rifle, to take full advantage of the cartridge with hand­loads that seat the bullets out farther, you need more running room than an SA provides. The XM is about .25 inch longer than an SA but is still .6 inch shorter than an LA, meaning it is lighter and has that much less bolt travel.

Rather than go with a detachable box magazine (DBM), I opted for a flush hinged floorplate made by Sunny Hill Enterprises. Though DBM rifles are all the rage, a flush magazine has cleaner lines and carries better in the field.

The action’s integral recoil lug and integral scope bases with 20 MOA of declination are typical of top-end competition actions. They add strength, improve accuracy, and reduce the number of potential failure points.

Carbon Barrel: To keep the rifle’s weight reasonable without compromising accuracy, I opted for a carbon-fiber-wrapped barrel from Proof Research. Its 24-inch length is ideal for the 6.5 PRC. It sacrifices very little velocity compared to a 26-inch barrel (the length commonly seen on competition rifles) yet is still handy in the field.

I’ve shot numerous Proof barrels over the years, and all have been tack-drivers. The one on this rifle is no exception. I shot groups smaller than .125 inch with it—but most five-shot groups are just under .5 MOA.

Crossover Stock: Tom Manners developed the EH-1 stock specifically for long-range hunters. The nearly vertical pistol grip with palm swells, broad beavertail fore-end, and flat-angled surface on the bottom of the butt, which helps when using a rear bag, are pulled from tactical and competition shooting. Like the barrel, the stock is made from carbon fiber, which keeps the weight under 2 pounds with a recoil pad.

In keeping with the rifle’s clean aesthetic, I didn’t opt for an adjustable cheekpiece. The geometry of the stock is already so good that the additional weight (more than a pound) and bulk weren’t warranted.

Locking Rail: Ingenuity Gunworks isn’t a household name among shooters—­not even with the competitors for whom its products are designed. But if there’s any element of this rifle that is game changing, it’s this rail embedded in the fore-end of the stock.

You might have seen the systems used in precision rifle matches that clamp rifles to tripods. Typically, the tripod heads are grabbing on to either a segment of a Picatinny rail or an ARCA rail (a 1.5-inch dovetail) on the stock. These systems provide tremendous stability, allowing for long shots from standing, kneeling, and sitting positions.

I wanted to incorporate that capability in this rifle but didn’t want to add rails to the surface of the stock, which are not only unattractive, but also take away from the stock’s functionality and impair the rifle’s handling.

The Ingenuity Gunworks Adjustarail sits flush under the fore-end and comes with adapters with both Picatinny and ARCA profiles that slide in and out of the rail in a flash. Locked in place, these adapters create a solid connection between the rifle and the tripod or bipod.

Using factory Hornady 6.5 PRC ammo shooting the 143-grain ELD-X hunting bullet, I shot five-shot groups from a standing position that averaged .883 inch at 100 yards in a howling crosswind. Normally, I’d be thrilled to shoot that well off a bench, but the fact that it was done from a standing position speaks volumes about the Ingenuity Gunworks rail.

Dual-Purpose Tripod: Glassing is an integral part of hunting the West, and with few exceptions that means carrying a tripod and spotting scope. I could have gone with a smaller, flimsier tripod in order to shave weight, but to get the performance I wanted, I didn’t skimp. The Really Right Stuff tripod with the Anvil-30 Ballhead is designed for shooters and is among the best on the market.

Ultralight Pack: Scoped and empty, my rifle came to 9 pounds 2 ounces. While it isn’t a featherweight rig, I can honestly say that every gram on that rifle contributes to its performance. To further justify its weight, I got a Stone Glacier Solo pack to haul it and the tripod around. Like all Stone Glacier gear, the Solo is made for the minimalist backcountry hunter. It can pack a moose quarter off the mountain as well as any meat-​­hauling frame but only weighs 4.6 pounds.

Hybrid Scope: I agonized over the scope for this rifle. In long-range competitions, I shoot first-focal-plane (FFP) scopes with milliradian adjustments and reticles that have ample reference marks for windage and elevation. But when you’re hunting, those reticles are often too faint to see well at lower magnifications, especially at first and last light. Plus, FFP target scopes are invariably heavier than their second-focal-plane counterparts.

With that in mind, I went with a Leupold VX-5HD 3–15×44 with a CDS elevation turret. While the scope’s bright glass, useful magnification range, and light weight (19.7 ounces) are all appealing, what really convinced me was the mil-based adjustments Leupold put into it for me. (As of this writing, it is one of only two Leupold has made—I’m hoping the company puts it into full production.) Paired with the TMR milling reticle, the scope gave me most of what I want from a precision rifle optic. The only downside is having to set the scope at 15X in order to use the references in the milling reticle.

Flush Cups: I decided I’d had it with swivel studs during an elk hunt in the Bob Marshal Wilderness a few years back. While bushwhacking through hellish yew thickets, the sling kept twisting and finally unscrewed the swivel stud. It made me want to pinwheel my 7mm Rem. Mag. into the bushes.

QD cups are simply better. They are flush-mounted and allow for 360 degrees of rotation, so there’s nothing to come unscrewed.

Crisp Trigger: There are plenty of good triggers out there to choose from, but the Triggertech Diamond is at the head of the pack. This trigger adjusts to less than 16 ounces, though mine is set at 2.25 pounds, and it breaks as clean and crisp as any single-stage trigger I’ve used.

Custom Ammo: Todd Walachi at Divide Gun Co. worked up loads using brass from Atlas Development Group. ADG is one of the new crop of U.S. boutique brass makers who are producing components that rival the best in the world. The consistency of the brass with respect to concentricity and case-to-case weight is superb and is part of the reason the rifle shoots so well. With 59 grains of Retumbo, the 140-grain Berger Elite Hunters have a muzzle velocity of 3026 fps.

Proving Ground: Before taking the rifle hunting, I shot it to 1,400 yards on steel. However, when it came time to use it in the field the first time, it was my son, Jack, who was behind the trigger. We spent a couple of hours stalking a whitetail that was bedded among some does that were feeding in an enormous ag field. We snuck in to about 300 yards using a brushy creekbottom for cover but couldn’t get any closer. I say about 300 yards, because a slight rise in the grassy ground made it impossible to range the buck accurately. We set up on the tripod, but since we couldn’t determine the exact correction for the shot, we backed out.

We circled around the field and got to a bluff above it at last light. Though the range to the deer was longer than before, Jack was solid in his prone position, and we could range the deer precisely. There was barely any wind, and after Jack dialed the elevation into the scope, he dropped the bullet right into the buck’s ribcage.

It was a perfect shot and the perfect end to my fall. I can also say that after spending a year on this project, I finally answered the question that had nagged me for so long. My perfect open-country Western hunting rifle was no longer just an idea, but was now a reality.