Our Shooting Editor takes Hornady’s new bullet out past 2,000 yards 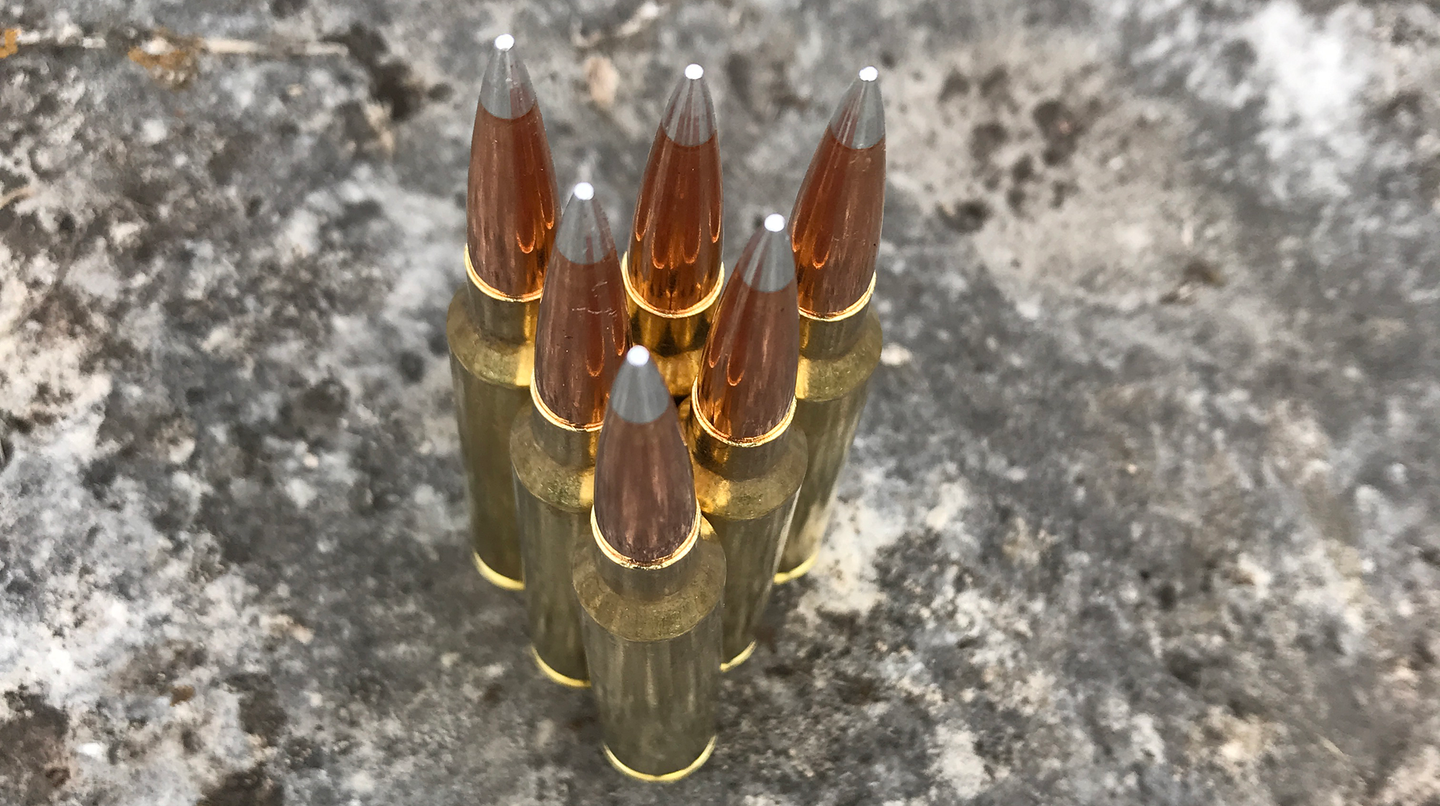 Nearly all production match bullets come in two flavors—either open-tipped match (OTM), which is a hollow-point bullet with a tiny opening, or tipped with a polymer insert.

There are shortcomings to each style. With OTM bullets it is difficult for the machinery that forms the jacket to get the tip just right. If you examine the point of an OTM bullet closely you’ll see that it usually isn’t symmetrical, and that can lead to inconsistencies with how the bullet flies. Polymer tips can also be inconsistent due to how they are molded. To make matters worse, they can deform in the magazine under recoil and, as we’ve learned in the last couple years, they can even melt as they fly downrange. Needless to say, none of this is good for accuracy.

Well, Hornady thinks it has an answer to these problems—a new bullet called the A-Tip that has a tip made of machined aluminum.

Before getting into the weeds on what is different about this bullet, I’ll start with my own observations after having shot a few hundred rounds (as of this writing) of this new projectile.

Most importantly, the A-Tip lives up to its central promise of delivering excellent shot-to-shot consistency, particularly at longer ranges.

When stretching it out to 1,000 yards or more it isn’t unusual to see bullets impacting at different elevations even though the shooting conditions and the shooter’s hold are the same from one shot to the next. It’s one of those things that drives long-range shooters to drink. While there are several potential culprits to explain this phenomenon, one of them is variability in the amount of drag bullets experience as they fly downrange, which can be caused by the inconsistencies in bullet construction I mentioned above.

The A-Tip minimizes this variability. Naturally, Hornady has charts and graphs generated from data gathered via Doppler Radar showing how the A-Tip performs more consistently than many other match bullets out there, but for me the proof was seeing how they shot in real-world conditions.

I spent a few days down in Texas at the FTW Ranch with a group of shooters and writers getting an early look at the A-Tip and taking it out past 2,000 yards. It was quickly apparent to me that the vertical variability with the bullet was much less than I typically experience with polymer-tipped match bullets and most OTMs.

Most of the time I was behind a 6mm Creedmoor, built by George Gardner, shooting the 110-grain A-Tips. Out to 1,400 yards the rifle was a laser beam and I had no difficulty making hits even at 1,800 yards.

For the really long-range work we stepped up to a 300 PRC loaded with the 250-grain A-Tip. The winds were fierce and the targets were fuzzy in the mirage through our scopes, but nonetheless we were able to ring steel at 2,000 yards and beyond.

Since then, I got my hands on a batch of the production 6mm 110-grainers and have been loading them for competition with good results. (Initially, the A-Tip is only going to be offered as a reloading component, though I’m sure that down the road Hornady and others will be loading match ammo with it.)

There are five bullets in the A-Tip line: the 110-grain 6mm, a 135-grain 6.5mm, a 153-grain 6.5mm, a 230-grain .308, and a 250-grain .308. Like many of the hottest match bullets today, the A-Tips are heavy. Part of that weight comes from the tip itself. Compared to a hollow-point or a plastic insert, the A-Tip puts more weight up front, and because the aluminum tip is longer than a polymer insert, it also lengthens the bullet’s ogive. Because they are heavy, they will do best in barrels with faster twist rates.

As you might know, these aren’t the first aluminum-tipped bullets made by Hornady. The 750-grain .50-caliber A-Max has one, but until now Hornady wasn’t able to mass-produce the tips in a cost-effective manner.

To enhance consistency, the bullets are going to be bagged in groups of 100 as they come off the press. They will also be available in sleeves of 500, which will consist of sequential bags of 100, again to minimize variations.

When reloading these bullets here are a couple things to keep in mind. First, the ogive extends very far back toward the bullet’s base, so you might have to go to a comparator with a smaller diameter hole to determine cartridge overall length (COAL). My Forster Dataum gauge does the trick.

This also means that the traditional method of determining bullet seating depth won’t work, at least with the 110-grain 6mm bullets. If you go to seat the bullet close to the lands, the bullet won’t even be in the case neck. In my 6 Creedmoor, the jump to the lands is more than .150-inches.

But don’t let that scare you. As I said, the proof is in how these bullets actually perform, which is exceptional. In the ever-changing world of long-range precision shooting I hesitate to predict much, but I certainly feel comfortable stating that these bullets are going to end up winning many matches this season and in the years to come.