A commercial gill netter was apprehended earlier this week with 2,611 pompano over the limit 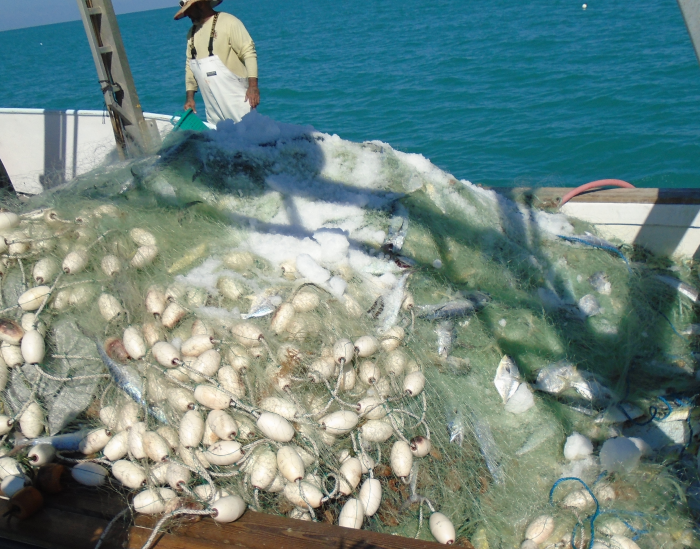 A commercial fisherman used a gill net to harvest more than 2,600 pompano over the legal limit. FWC
SHARE

The Florida Fish and Wildlife Conservation Commission charged Capt. Ronald Edward Birren, 52, of Hernando Beach, with unlawful use of a monofilament entangle net (gill net) after Birren took thousands of pompano from federal waters in the Gulf of Mexico. He was cited for being in possession of 2,611 pompano over the limit, 76 of which were under-sized.

On March 14, FWC officers on an offshore patrol boat stopped the Legacy, a 48-foot commercial vessel captained by Birren. The boat was approximately five miles south of a region known as the “Pompano Endorsement Zone,” located in federal waters in the Gulf of Mexico near Cape Sable and north of the Florida Keys.

On the boat was a “gill net with a substantial amount of pompano in the net and on the deck of the vessel,” read the FWC statement. “Officers began a fisheries inspection and quickly realized the vessel possessed well over the allowable bycatch limit of 100 pompano outside of the endorsement zone.”

The FWC boat then escorted the Legacy to Everglades City, where authorities inspected the vessel and discovered a total of 2,711 pompano weighing nearly 4,000 pounds. Of these fish, 76 were under the minimum size of 11 inches for the species.

Florida banned the use of gill nets in state waters in 1995. The constitutional amendment followed a state referendum vote that was overwhelmingly in favor of the ban. Gill nets are still legal in federal waters, but their use is highly restricted, and Florida law states that all pompano harvested in federal waters with a gill net must be landed within the boundaries of the Pompano Endorsement Zone.

“Our officers are dedicated to protecting our state and federal fishery resources,” said Maj. Alberto Maza, FWC South Region B Commander. “Violations such as this one highlight the importance of the work that these men and women do every day.”

Pompano fishing is a big deal in Florida. The small but sporty fish are great fun on light tackle, and they are highly prized for their delicate white meat and mild flavor. Fishing for the species has declined in some parts of the state in recent years, as stocks are increasingly stressed by overfishing. This latest case of a gill netter illegally harvesting such a massive number of pompano has raised the ire of many sportfishermen who target the species, particularly in the southern part of Florida.

Read Next: 10 Florida Men Arrested for Using a Gill Net to Catch 500 Pounds of Fish in Tampa Bay

“We don’t see a lot of presence on the water by FWC these days because they are so spread out. We just don’t have enough law enforcement to make a dent in the poaching and illegal netting,” says Capt. Ray Markham of St. Petersburg. “The economy is really struggling, and when people are put in the corner to survive, some will resort to whatever means that they deem necessary to survive. I don’t see it getting much better right away.”

Dave Markett is another long-time southwest Florida charter captain. He runs trips in the Tampa and Boca Grande areas, and he agrees that a lack of enforcement on the water has led to an increase in poaching in the Gulf.

“This happens lots of times and apprehension is rare” for illegal pompano netting, says Markett. “Pompano are likely the most heavily poached species in Florida … I have objected for years at FWC meetings that pompano are allowed to be taken before the majority of fish spawn, and by methods that have been illegal in state waters for decades,” he continues. “There’s almost no on-the-water enforcement of state fishing laws.”