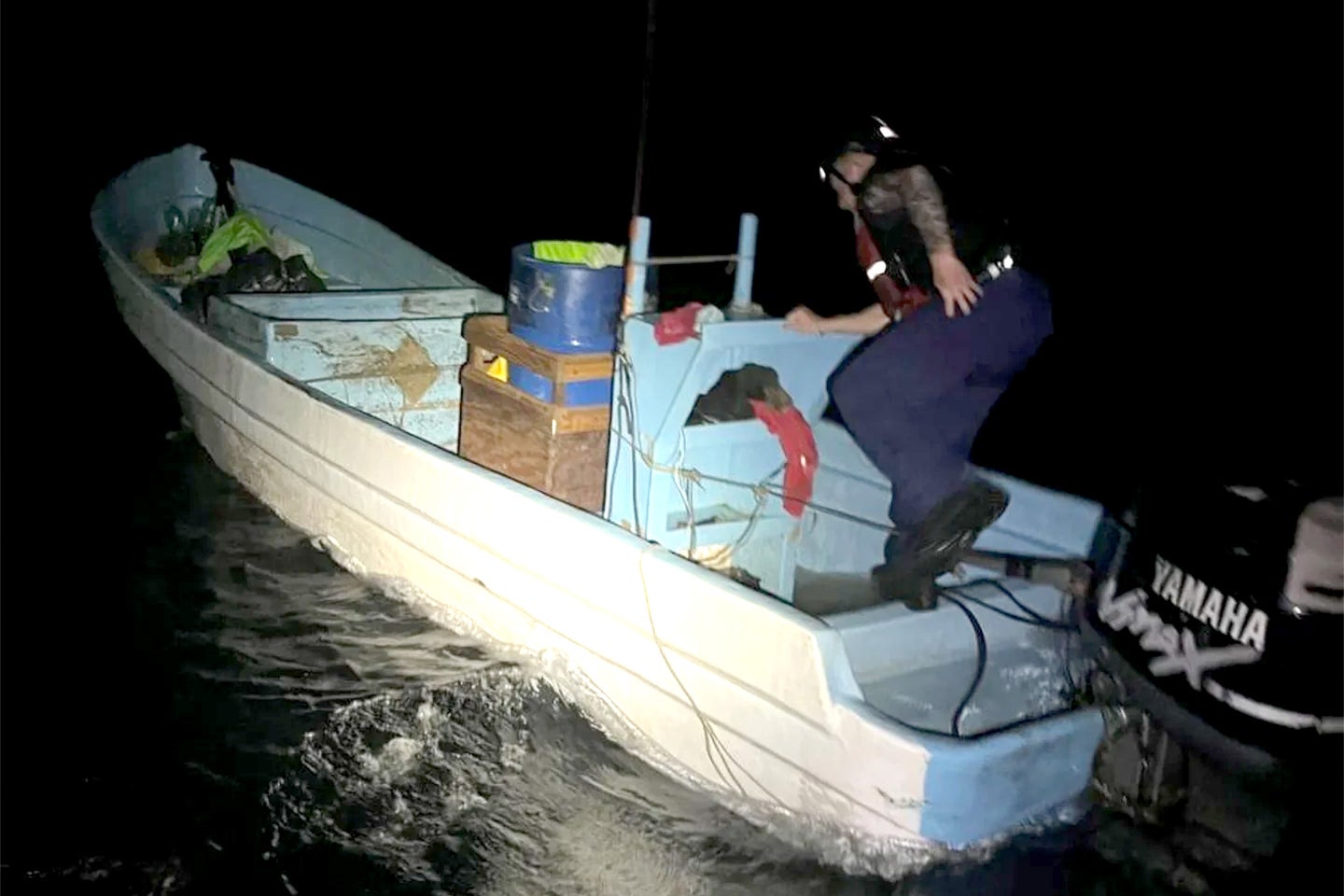 A USCG crew member inspects a "lancha" that was intercepted off the South Texas Coast. U.S. Coast Guard
SHARE

The U.S. Coast Guard intercepted three boats that were fishing illegally in federal waters off the South Texas coast on Aug. 30. A total of fourteen Mexican fishermen were onboard the three lanchas, which are long and slender skiffs fitted with high-powered outboard motors. Multiple USCG crews from the South Padre Island station assisted the Cutter Edgar Culbertson’s crew in investigating and detaining the vessels, which had large quantities of illegally caught snapper and sharks onboard. The USCG’s Corpus Christi Sector and Air Station Corpus Christi assisted with the efforts as well.

The three Mexican fishing boats were discovered “with approximately 440 pounds of shark and 2,425 pounds of red snapper along with fishing gear, radios, GPS devices and high flyers,” a USCG press release reads. “Coast Guard crews detained the Mexican fisherman and are scheduled to transfer them to border enforcement agents for processing.”

Red snapper poaching is an issue up and down the Gulf Coast, but tensions are running especially high along the Texas-Mexico border, where Mexican fishermen regularly cross into U.S. waters to catch snapper illegally. The cross-border fishery has created such a profitable black market for red snapper that a Mexican Cartel has gotten involved, according to NPR, and more illegal fishing boats are being intercepted every year off the South Texas coast.

In 2020 alone, the USCG South Padre Island station seized 37 tons of marine life from Mexican lanchas, and the law enforcement agency detained a total of 547 Mexican fishermen. (Every one of these fishermen was released without charges, as the United Nations Convention on the Law of the Sea requires foreign anglers to be promptly released from detainment once bail is posted.)

Read Next: Gill Netter Busted for 2,611 Pompano Over the Limit, Underscoring Frustrations Among Florida Sport Fishermen

“They’ll come into U.S. waters, they’ll fish, they’ll grab as much snapper as they can and they’ll go head back south before we can detect them. The average catch they’ll have on board is 1,000 to 3,000 pounds of snapper,” Lt. Cmdr. Dan Ippolitio, commanding officer of the South Padre Island station, told NPR last year.

This issue has become such a problem that on Feb. 8, 2022., the U.S. banned all Mexican fishing vessels from entering U.S. ports in the Gulf of Mexico. Clearly this ban hasn’t put an end to illegal snapper fishing in the Gulf, and the USCG continues to do its best to wrangle snapper poachers in federally protected waters.

“Working collaboratively with our federal, state and local partners, we continue to detect and deter illegal fishing occurring in the U. S. Exclusive Economic Zone,” Capt. Kristi Luttrell, chief of response for Coast Guard District 8, said in the USCG press release. “Successfully protecting our limited marine resources requires a whole-of-government approach, and these successful cases illustrate our commitment to that effort.”