Video: Florida Angler Under Investigation for Beating a Shark with a Hammer Then Releasing It 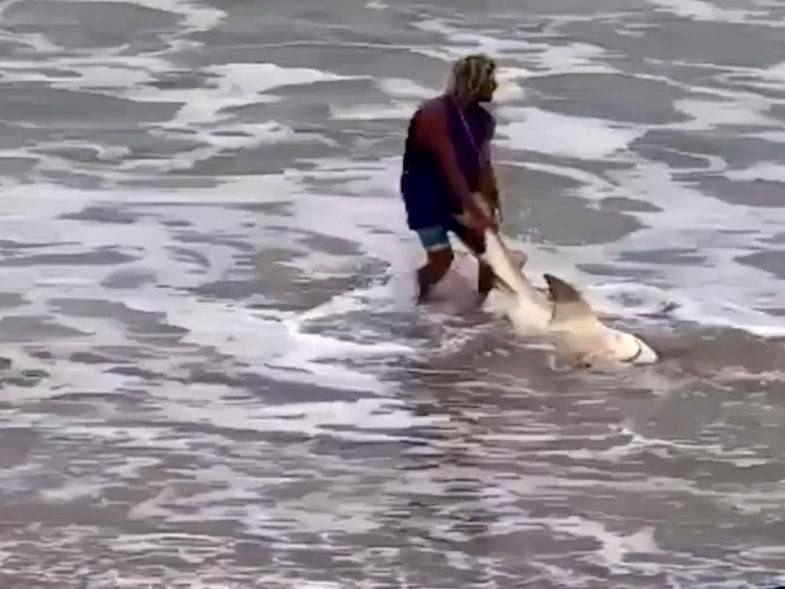 Wildlife officials with the Florida Fish and Wildlife Conservation Commission are investigating a man who was filmed beating a shark with a hammer and then dragging it into the surf. The video footage was recorded on Dec. 20 by Harbour House Oceanfront’s “surfcam”, which publicly broadcasts live footage of the ocean conditions on Indian Harbor Beach. A witness shared the video with FOX-35 Orlando later that afternoon.

According to one employee at Harbour House, which is primarily a wedding venue, the witness who shared the video is one of the venue’s owners. The employee explained that a member of the public was watching the surfcam online yesterday and called the venue to notify them of what was happening around 3 p.m., according to the video’s timestamp. Someone at Harbour House then recorded the live video feed while panning and zooming the camera to focus on the brutal scene.

At the beginning of the video, the fisherman is alone on the beach with the shark on its side at his feet. He drives the claw of a hammer into the shark’s gills while he appears to unhook it, and then he drags it a short distance across the sand, where he is joined on the beach by an unknown male onlooker.

The shark appears to be dead by the video’s halfway mark, at which point the fisherman flips it onto its belly. He beats the shark with the hammer, whacking it over the head at least 10 times. The video then cuts to the man dragging the lifeless shark into the surf. The waves keep washing the shark’s body onto the shore, which forces the man to drag it back into the water a few more times before the shark disappears and the video ends.

Read Next: Video of Two Men Stabbing a Shark on a Florida Beach Shows Exactly Why Land-Based Shark Fishermen Are Getting a Bad Rap

According to FOX-35, the witness said the shark in the video is a Lemon shark. The news outlet was unable to confirm this detail, but if this is the case, then the man would have broken the law by catching and killing the fish. Lemon sharks are on the FWC’s “prohibited sharks” list, which means that if a sport fisherman does catch one of these species, it “must be released without delay when fishing from the shore.”

Even if it turns out the shark was not a protected species, it’s illegal to intentionally kill a shark and then release it. The FWC has list of guidelines for beach anglers fishing for sharks (the guidelines do not include using a hammer):

The man in the video has since been identified by FWC investigators, and he could also face additional charges under Florida’s Cruelty to Animals statute.

“Investigators have identified the individual in the video and would like to thank the public for their assistance,” FWC public information officer Ashlee Sklute explained in an emailed statement. “Per normal protocol, while this investigation is ongoing, the agency will not confirm the identity of the individual involved.”