After pleading guilty to wildlife violations in Nebraska for the third time in seven years, the Florida resident agreed to sell his property in the state 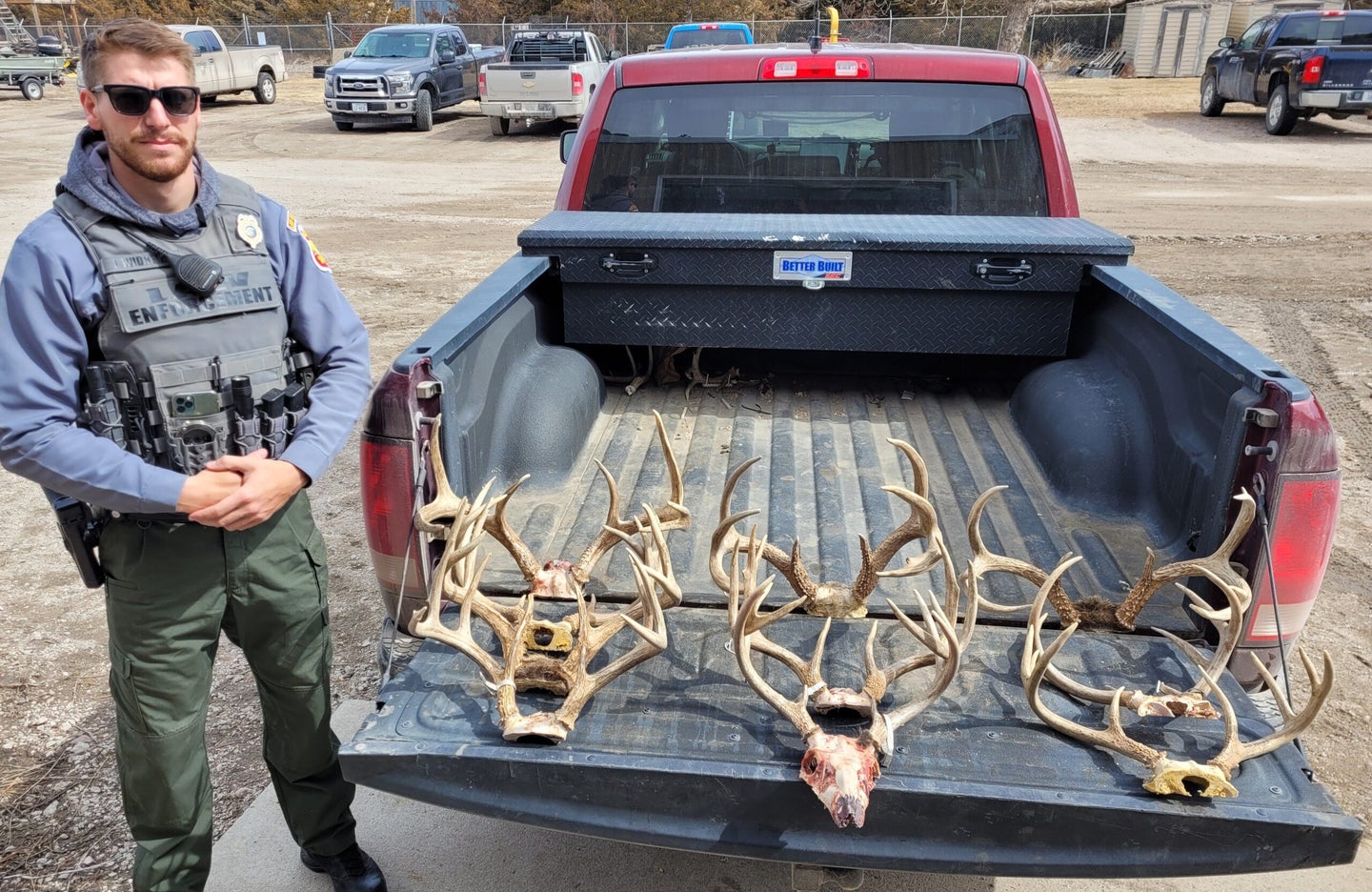 Conservation officer Josh Widhelm stands next to 10 deer skulls that he seized in Morril County in 2020 and 2021. Josh Widhelm / NGPC
SHARE

Nebraska game wardens followed the path of cracked corn all the way to Florida during a lengthy investigation that ended with an unprecedented plea deal, which required the repeat offender to sell his house and land in Nebraska to stay out of jail. The multi-phase investigaton began back in 2020, when Nebraska Game and Parks conservation officer Josh Widhelm followed up on a tip that a guide was baiting deer on land he leased near Bridgeport, according to the Lincoln Journal Star.

While it’s not illegal to feed deer in the Cornhusker State, “it is illegal to hunt any big game or turkey within 200 yards of a baited area,” according to Nebraska’s hunting regulations. And on their first visit to the property, Widhelm and five other conservation officers gathered some incriminating evidence, including tubs full of corn kernels and a nearby blood puddle, along with a tree stand that was only 106 yards away and a discarded .308 shell casing.

Widhelm figured out that Futch was leasing the land during deer season and bringing fellow Floridians to hunt on the property. He also learned that Futch had bought their tags, set them up in shooting stands, and processed their deer, but he never admitted to guiding them and kept insisting that the hunters were friends of his. When Widhelm contacted the Florida hunters, they told him they paid Futch “up to $7,000 a piece” to hunt deer in the Nebraska Panhandle.

That fall, Widhelm seized five deer from the property and issued 10 citations for hunting over bait. Futch was ordered to pay $2,000 in damages and was banned from hunting—or being in the presence of hunters—for two years starting in June 2021, the Journal Star reports. (This wasn’t the first time that Futch had been busted, and the investigation revealed that he pled guilty to hunting in a baited area back in 2015.)

Then, during last year’s deer season, Widhelm caught wind that Futch was back to his old tricks again, only this time he owned the Morrill County property where he was guiding and baiting deer. So Widhelm began surveilling Futch’s property, which was located a few miles north of Bridgeport along U.S. 385.

“We started watching him process deer for hunters and making sure they were getting to their stands,” Widhelm said. “He was engaged in the guiding aspect of it, and that was enough for us to piece together he was violating his court order.”

While the hunters themselves didn’t seem to be violating any laws, Futch most certainly was. At the very least, he was in direct violation of his original plea deal, made in June of 2021.

On Feb. 2, Futch signed another plea deal to keep himself out of jail once again. Only this time, he was ordered to sell his house and land near Bridgeport, and he is not allowed to rent or buy any other Morrill County property for the next five years. He is also prohibited from hunting, fishing, guiding, or doing anything hunting-related for the same period, according to the local newspaper. If he violates these terms, he will be sentenced to a year in jail.