Wildlife officials say their best option at this point is to capture and euthanize the nuisance bear, but local bear advocates are still pushing for a non-lethal alternative 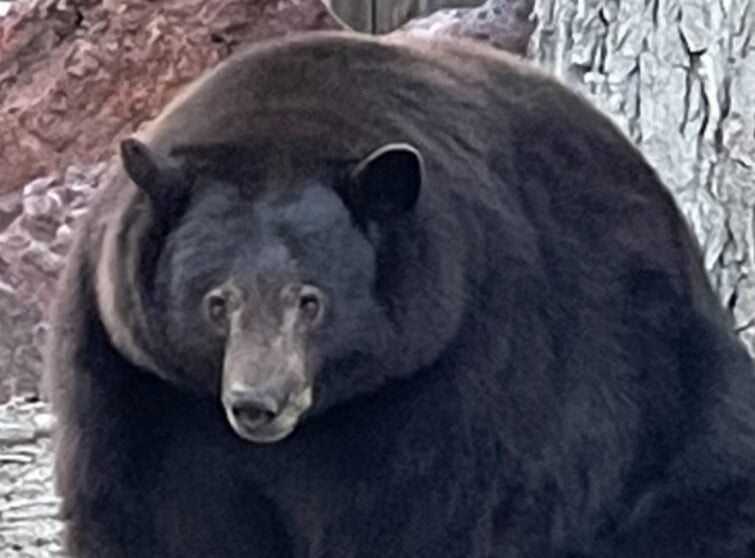 This big-boned bear is raiding dozens of homes and stirring controversy in South Lake Tahoe. via Facebook
SHARE

A well-known 500-pound black bear in South Lake Tahoe is pitting a group of local bear advocates against wildlife officials, who say their best option at this point is to trap and euthanize the nuisance bear. In a public meeting that was held in the Tahoe Keys neighborhood last night, a local advocacy group known as the Bear League proposed that the troublemaking bruin be transported to a wildlife sanctuary in Colorado, reports News 4.

Officials with the California Department of Fish and Wildlife responded that the agency would consider this option, but they said that because Colorado Parks and Wildlife does not typically allow wild-born bears to be imported into the state, they were doubtful that this option would be successful. Known by some in the local community as “Yogi” or “Hank the Tank,” the plus-sized bear has made a habit of raiding and breaking into homes in the Tahoe Keys community. Officials with CDFW say the bruin has been linked to property damage at 38 different properties and has been the source of at least 150 phone calls so far this winter.

Wildlife officials have tried hazing and other mitigation efforts in recent months, but since these methods have failed to deter the bear, the agency set up multiple traps in the area in early February.

These traps drew immediate backlash from the Bear League and others in the community, and they were subsequently removed from the neighborhood. The League and other locals have said that nobody wants the bear to die because of negligence on the part of homeowners.

“It’s how the community feels,” Ann Bryant, executive director of the Bear League, said in an interview earlier this week. “They do not want the bear to pay the price for human ignorance. So when a bear is set to die in their community, people take a stand.”

Former South Lake Tahoe Mayor Brooke Laine has sided with the League, and last week she told Nevada Current that living around wildlife and being bear-aware is part of day-to-day life in the Tahoe Basin. Recent surveys show that there are an estimated 50 bears living within the city limits of South Lake Tahoe, with roughly 10 times that many living on the California side of the lake.

“There are a lot of bears that we live with in the basin, and we consider them to be as important as we do our own quality of life,” Laine said. “The majority of our citizenry, I believe, do not support the destruction of a bear simply because it broke into a house that had a food source.”

This back-and-forth between wildlife officials and members of the local community eventually led to the meeting that took place in Tahoe Keys Wednesday. In that meeting, both parties agreed that relocating the bear elsewhere in the Sierra Nevada was not an option. But the Bear League said they had been in touch with a wildlife sanctuary in Colorado that was willing to take the bear on principle.

CDFW pointed out that this solution is easier said than done, and released a statement after the meeting, saying, “We learned from the Bear League about a facility in Colorado willing to take the black bear…[and] we are investigating this option further. However, Colorado has not allowed the importation of wild-born bears in recent years. Our last transfer to that facility required documentation that the animals were captive-born.”

Wildlife officials added that, so far, they have not received the required relocation permit from CPW. Officials said they will continue to pursue this option, but that due to the severity of the bear’s actions over the course of this winter, they will be forced to keep the lethal removal option on the table. They clarified that this “is a measure of last resort” and would only be considered when dealing “a severely habituated and human-food conditioned” black bear. “At the moment,” the statement concluded, “we have pulled our bear traps and are evaluating our options in dealing with this very problematic bear.”

“It is the point of no return for this bear,” Jason Holley, a supervising wildlife biologist with CDFW, told South Tahoe Now. “But the public needs to fix the things that brought us to this point, or it will continue.”