When air and water temperatures drop, sub-tropical critters slow to a crawl. But some still gotta eat 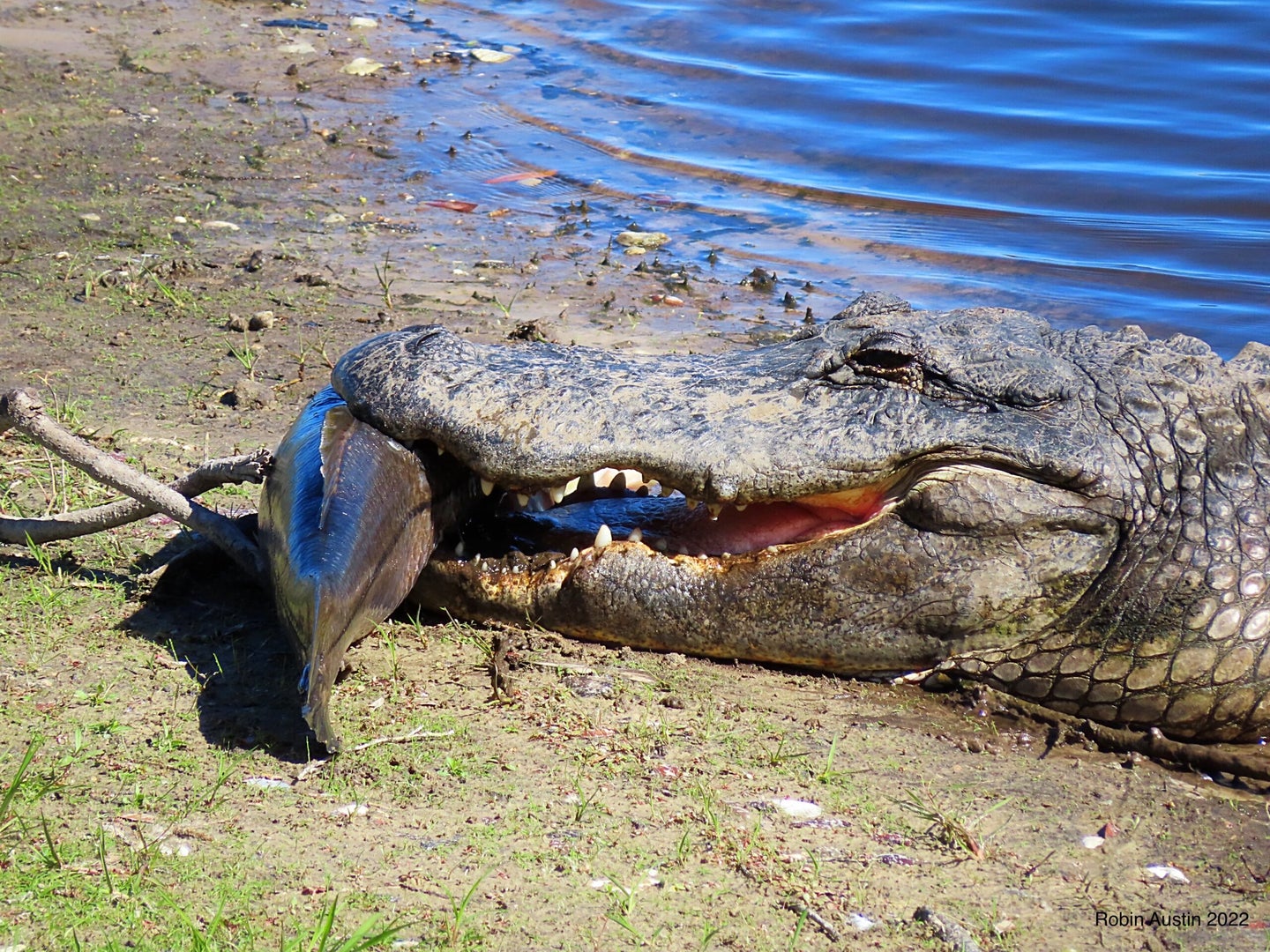 South Florida is teaming with all manner of wildlife and fish year round, but many aren’t used to fast-dropping air and water temperatures. When the mercury falls, some species slow to a crawl. That’s what happened recently one night when temperatures dipped below freezing. The following morning retirees Robin and Dick Austin went for one of their many rural drives to watch for wildlife near their Venice, Florida, home.

“We go to Myakka River State Park near Sarasota a couple times per week to enjoy its wild beauty and wildlife,” says Robin “We were at the main bridge entering the park thinking there’d be a lot of alligators out on sunny banks trying to get warm. We went over the bridge and I looked down and there was a huge alligator up on a bank in the sun, with a large fish in its mouth.” Dick stopped the car so Robin could get out to take photos of the gator, while Dick drove over the bridge to wait for her. The gator was just 10 yards from the bridge when Robin started clicking off photos with her Canon PowerShot. The camera has a short zoom lens, and when Robin zoomed in on the gator, she was stunned to see it had a huge snook in its mouth.

“I was shocked, because the snook was so big, 36 to 40 inches, likely 12 to 15 pounds,” says Robin, who was raised in Everglades City and whose father was a commercial fisherman and angling guide.

“I knew it was a big snook, and I also knew that even a big alligator wouldn’t likely catch a lively, healthy big snook like that.” She guesses that the snook must have been stunned by the cold air and water, and the gator just grabbed it. The snook also was not mauled or chewed in any way, which suggests the fish didn’t struggle when the gator latched onto it. The gator, estimated at 10 to 12 feet, never moved for the 20 minutes Robin watched it and snapped photos. As a cold-blooded reptile, it likely was feeling sluggish, too.

Capt. Ray Markham is a long experienced guide in that southwest Florida area and has seen plenty of big snook in the Myakka River during winter. He saysthe water temperature the night prior to Robin’s photos got into the low 50s—plenty cool enough to stress snook and make them vulnerable to predators like gators.

“There’s no way a gator is going to catch a healthy snook of that size unless it was shocked by a sudden cold front and fast-falling water temperature,” says Markham. “That photo is a rarity that I’ve never seen or heard of. I’ve found plenty of cold-water-stunned snook in past cold front conditions, but fortunately this recent one was just a night or two of cold, warming fast in the day, and I don’t think we lost many fish.”

It was freezing that night, and there was frost on the ground that morning, says Robin. She’s sure the snook was stunned by the sudden drop in water temperature, and the gator just happened on it and grabbed it on the way to sunning itself at the bank.

“The fish had no bite marks, so it didn’t struggle,” she says. “There are so many big gators in that area I’m sure that one wanted to make sure it staked claim to that big snook when it got warm enough for it to eat it.”

Robin sees big gators in the area that have eaten other species of fish, turtles, even birds—but never a trophy snook.