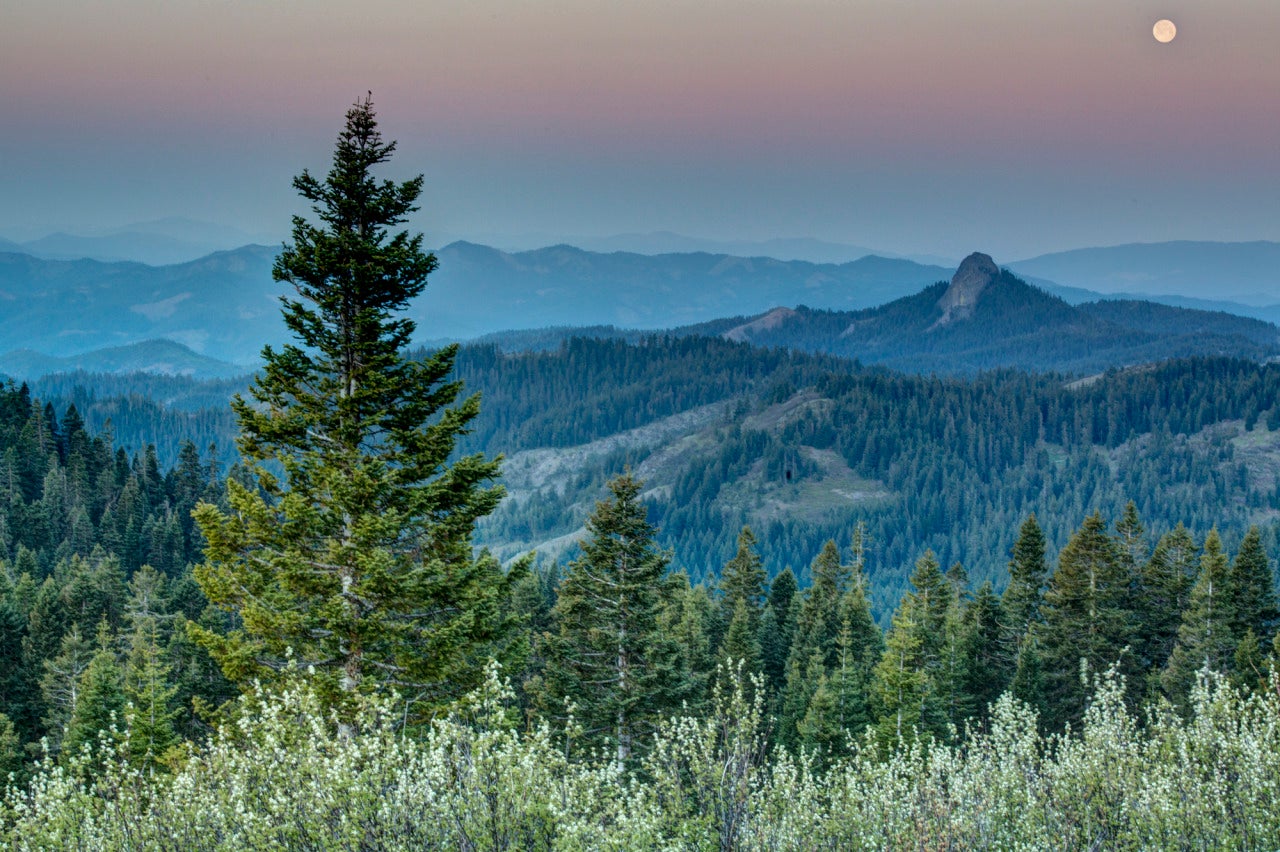 One fourth of the lands managed by the Bureau of Land Management are forests or woodlands like Cascade Siskiyou National Monument in Oregon. Bob Wick/BLM
SHARE

Senate Minority Leader Mitch McConnell formally asked President Joe Biden to withdraw his nomination of Tracy Stone-Manning as the director of the Bureau of Land Management late Friday, citing concerns over her association with ecoterrorists 32 years ago and apparent inconsistencies in her Senate testimony. McConnell’s request comes after all 10 Republicans on the Senate Committee on Energy and Natural Resources called on President Biden to revoke Stone-Manning as his pick for the position in a July 14 letter.

A Senate meeting to consider Stone-Manning’s nomination is scheduled for July 22. Given the party-line split within the Senate Committee, all 10 Democrats on the committee must vote in Stone-Manning’s favor to secure her confirmation. If this happens, the vote will go to the Senate floor, with a tie-breaking vote from Vice President Kamala Harris. It remains unclear if Biden will withdraw Stone-Manning’s nomination before the vote occurs, or if he will allow her to work in an acting capacity in overseeing the organization that manages 247 million acres of federal land, or 1 in 10 acres in the U.S. The BLM has been without a Senate-confirmed director for more than four years after former President Trump withdrew his fraught nominee William Perry Pendley from consideration. Pendley served either in an acting or deputy director capacity for another two years, until Biden’s election.

Although Stone-Manning has support from more than 30 prominent hunting, fishing, and other conservation organizations, her appointment to the top BLM job has been under scrutiny for months. Stone-Manning’s confirmation hearing before the Senate Committee on Energy and Natural Resources took place on June 8, amid pointed questions from Republican committee members. Her possible confirmation—already uncertain given the committee’s partisan divide—has undergone further scrutiny since questions resurfaced about her role in a 1989 tree-spiking incident on National Forest land. Tree spiking involves driving metal or ceramic spikes into tree trunks to prevent logging by damaging chainsaws and sawmill equipment, a practice that can seriously injure loggers and was classified as a felony in 1988.

What We Know About the Tree-Spiking Investigation

While a graduate student at the University of Montana, Stone-Manning said an Earth First! activist by the name of John Blount asked her to mail a letter to the U.S. Forest Service in 1989. The letter warned USFS officials of spiked trees in the Clearwater National Forest. Stone-Manning said that she had retyped the letter to correct spelling errors and remove some profanity before mailing it, according to AP news stories in 1993.

“I was concerned that if I did not mail the letter, [Blount] would not, and I wanted to make sure that someone was made aware of it so that no one would get hurt,” Stone-Manning wrote last week in her answers to supplemental questions from the Senate committee.

Stone-Manning denied any involvement in the tree spiking itself or prior knowledge of it, and testified in exchange for immunity during the 1993 court case that resulted in jail time for Blount and another activist.

“I recall being disturbed with the whole situation and frightened of him,” Manning wrote. “I wanted nothing to do with it and did not want anyone to get hurt.”

Court records do not suggest Stone-Manning was involved in the spiking incident, according to the Hill. A retired USFS special agent disagreed in a letter to the Natural Resources Committee last week, identifying himself as Michael Merkley and the criminal investigator into the tree-spiking case. He opposes Stone-Manning’s confirmation as director of the BLM, describing her as “vulgar, antagonistic, and extremely anti-government,” as well as “uncooperative” during his initial investigation in 1989 and “not forthright” in the subsequent court case in 1993.

“Stone-Manning only came forward only after her attorney struck the immunity deal, and not before she was caught,” Merkley writes. “At no time did she come forward of her own volition, and she was never entirely forthcoming. She was aware that she was being investigated in 1989 and again in 1993 when she agreed to the immunity deal with the government to avoid criminal felony prosecution.”

On July 5, ranking member of the Senate Committee on Energy and Natural Resources John Barrasso (R-WY) sent Stone-Manning a letter asking her to answer his initial 14-page questionnaire for the record and 39 pages of follow-up questions about her role in the tree-spiking incident, among other topics. He has subsequently accused her of lying on a nominee questionnaire that asked if she had “ever been investigated, arrested, or charged” for the violation of any law.

“This investigator has confirmed what I have been saying. Tracy Stone-Manning collaborated with eco-terrorists who had booby trapped trees with metal spikes. She mailed the threatening letter for them and she was part of the cover up,” Mr. Barrasso told The Washington Times.

On July 19, Barrasso wrote an op-ed for USA Today stating: “The president’s own terrorism strategy recognizes the danger of environmental extremists. If he’s serious, he will withdraw Ms. Stone-Manning’s name from consideration and choose someone to lead BLM who can win the confidence of the American people.”

Manning responded to Barrasso’s questions with a 57-page explanation on the July 15 deadline. She maintains that she played no role in the tree spiking other than mailing the letter in question, which she did so that no one would get hurt. Court records of the 1993 case do not indicate Stone-Manning was involved in the tree-spiking, according to The Hill, and a White House spokesperson said the administration still stands by Stone-Manning as its pick to run the BLM.

Who Is Tracy Stone-Manning?

Tracy Stone-Manning is currently the senior advisor for conservation policy at the National Wildlife Federation, and a Montana outdoorswoman who says her “professional life has been informed by a private passion for hiking, floating, hunting, and backpacking.” She was raised in a Navy family according to her LinkedIn profile. Now in her mid-50s, Stone-Manning began her conservation career in 1999 as the executive director of the Clark Fork Coalition, where she led the cleanup of Montana’s Clark Fork River Mega Superfund Site.

“We gathered people from all camps—Republicans and Democrats, Rotarians, trade unionists and environmentalists—to work for the removal of an ailing dam and the toxic sediments behind it,” Manning said in her June hearing testimony. “Our success created thousands of jobs. We started to understand the power and promise of a restoration economy and saw how restoring the landscape restores community.”

Her work on the Clark Fork cleanup attracted the attention of Senator Jon Tester (D-MT), who hired her in 2007 and testified on her behalf at the recent confirmation hearing. Stone-Manning served as director of Montana’s Department of Environmental Quality at the request of former Governor Steve Bullock (D-MT), and later as his chief of staff. Stone-Manning says she oversaw 11,000 Montana state employees in the latter role which, she noted, is roughly the same number of employees she would oversee in the BLM if confirmed.

More than 30 conservation organizations—including the National Shooting Sports Foundation, Ducks Unlimited, and the Boone and Crockett Club—voiced their support for Stone-Manning’s leadership of the BLM in a letter sent to the natural resources committee ahead of her confirmation hearing on June 1. The letter describes her as a “well-respected, collaborative, and knowledgeable leader throughout the conservation community.”

Missoula-based Backcountry Hunters and Anglers also endorsed Stone-Manning for the job. BHA President and CEO Land Tawney has known Stone-Manning personally for two decades and worked with her closely in Montana conservation circles.

“She is a staunch supporter for conservation,” says Tawney, citing her professional background and policy experience. “She is very prepared to do this job. I think she’s one of the smartest people I’ve ever been around, she’s a good listener, and she has vision. All of that led to us putting our support behind Tracy.”

As former treasurer and a board member of Montana Conservation Voters, Stone-Manning worked with Tawney’s sister Whitney Tawney, the executive director of MCV. The organization has been a vocal critic of Senator Steve Daines (R-MT) who they say “supported the unlawful, extremely partisan, anti-public lands radical William Perry Pendley heading the Bureau of Land Management.”

The bitter battle over the Montana governor’s race led to further partisan divide.

“Last year, for political gain, she smeared a champion of common sense and a member of this committee,” said Senator John Barrasso (R-WY) in the opening remarks of Stone-Manning’s confirmation hearing, accusing her of “unvarnished political partisanship” and “signing off on political ads attacking Montana Senator Steve Daines” while working for the Montana Conservation Voters.

Although Stone-Manning acknowledged supporting her old employer and former Democratic governor Steve Bullock in his reelection campaign in 2020, she also said the election is over, she accepts the results, and is moving on with bipartisan collaboration. Supporters have described Stone-Manning as a champion of the BLM’s multiple-use mandate, and can set aside partisan differences to listen to and work with a variety of stakeholders.

While the Dallas Safari Club withdrew its support for Stone-Manning’s nomination after the tree-spiking controversy resurfaced, the remaining 34 hunting, fishing, and conservation organizations continue to back Stone-Manning.

“I didn’t know her in college, but I’ve known her for the last 20 years,” says Land Tawney. “And in those 20 years, she’s given me every reason to support her nomination. She’s smart, she has vision, she listens. She just knows the issues. And I would not take that support back…This feels super partisan to me, and not about the resource and not about the job. Tracy has a distinguished career that absolutely qualifies her.”

The confirmation hearing for Stone-Manning and three other appointees took place on June 8 before the Senate Committee on Energy and Natural Resources. Barrasso, ranking member of the committee, helped kick off the hearing with his doubts about Stone-Manning’s suitability for the position.

“The Bureau of Land Management needs a director who believes in and is committed to upholding the agency’s multiple-use mandate,” Barrasso said. “Based on her record, I’m concerned Ms. Stone-Manning does not fill the bill. Her career has been defined by her support for policies that restrict multiple-use activities on public lands.”

Stone-Manning appeared familiar with the management issues surrounding wild horses, noting that their population doubles every four years and acknowledging that wild horses should be managed with the “health of the landscape” in mind. While she said creative solutions would be necessary and suggested possibly securing help from Congress—an allusion to the current federal mandate of non-lethal management—she also said, “It’s clear to me that we need to ensure that humane treatment drives these decisions.”

Senator James Lankford (R-OK) dug into the multiple-use mandate of BLM stewardship, asking her to, “Fill in the blank: “Public lands are for…?”

She also confirmed that she still stands by a previous statement she made, that “there is plenty of room in the West for oil and gas development.”