Management of Alaska’s Tongass National Forest Is Back on Track for Hunters, Anglers 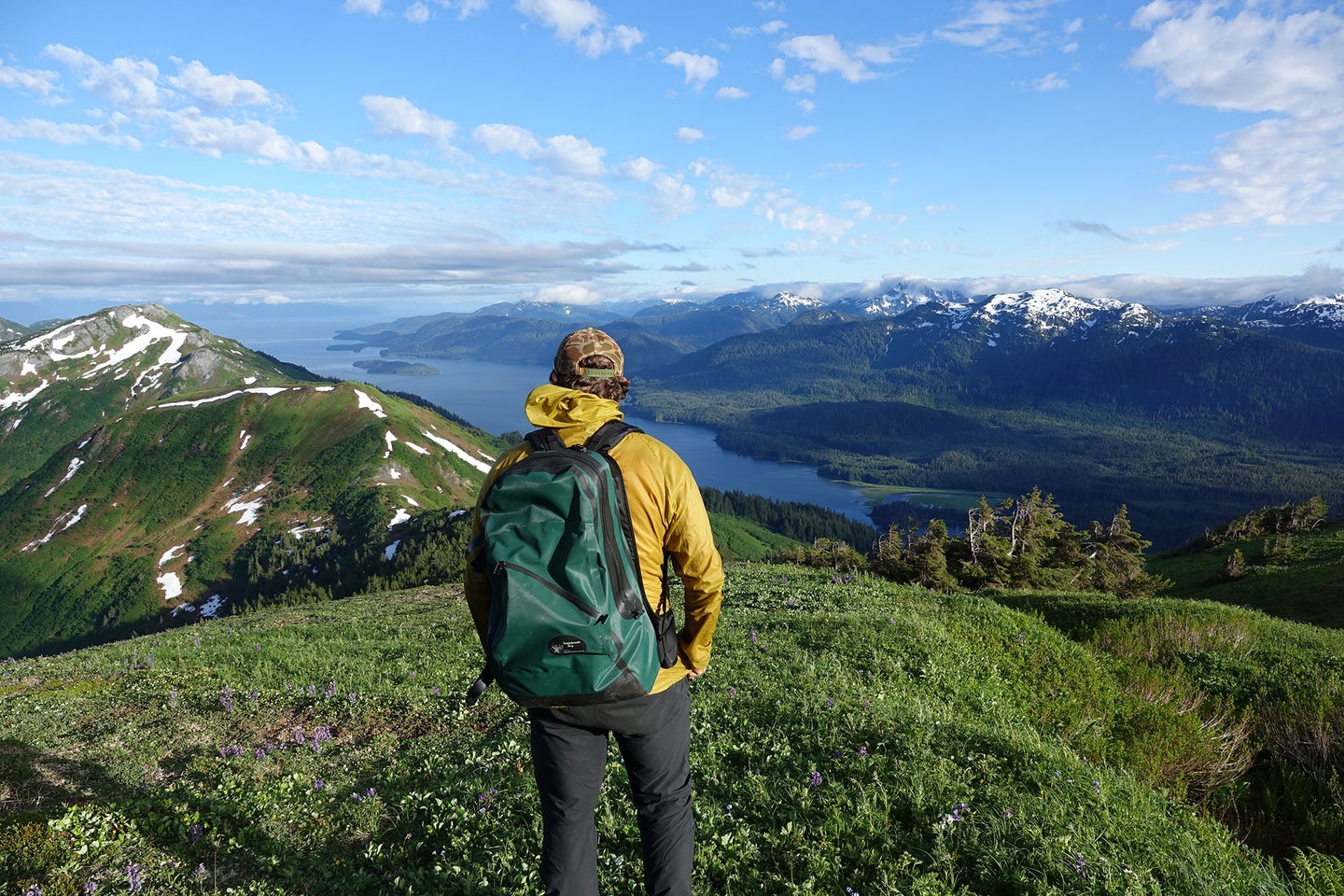 A hiker in the mountains on Chichagof Island in the Tongass National Forest. Bjorn Dihle
SHARE

On July 15, the U.S. Department of Agriculture announced a radical shift in direction for the nation’s largest national forest, the Tongass. They’ll be ending industrial-scale old-growth logging, focusing on sustainable uses of the forest in collaboration with diverse local groups, and they plan to restore Roadless Rule protections, which were stripped in October 2020 after a rushed process that ignored Alaskans’, Americans’, and Tribes’ comments and requests.

On the day of the announcement, I returned home after guiding a three-week brown bear film shoot on Chichagof Island. Early in the shoot, from a mountain top, I stared out on a landscape devastated by clear-cut logging in the 1970s and 1980s. A sickly expanse of spindly second-growth covered valleys and mountainsides that were broken by erosion, landslides, and piles of gray stumps. Much of Chichagof’s remaining most productive old-growth forest—which is also the best habitat for deer, salmon, brown bears and a host of other species of fauna and flora—was at that moment, for all I knew, targeted to be clear-cut. My livelihood, not just the money I make guiding wildlife film crews, but the deer, salmon and other wild foods I eat, is tied to intact habitat that the Roadless Rule had helped protect. So, like most Southeast Alaskans, the October 2020 axing of the Rule had left me wondering about the future. Rekindling the one and done approach to logging of the pulp mill era, which did away with most of the Tongass’ best old-growth habitat, was nothing short of an existential crisis for me.

While the Tongass is 17 million acres, only about half is forested — the rest is covered by rocks or glaciers, or is alpine tundra, or muskeg. Less than a third is what people call “productive old growth forest.” And only 3% of it is “large tree old growth” — trees with trunks with a 21-inch diameter or bigger. The biggest trees, the ones people take pictures of and stand in awe before, are incredibly rare. Maybe half of a percent of the Tongass. Many have already been cut.

The habitat and environment here is much different than forestland in the Lower 48. It’s cool and rainy here most months out of the year. And when trees in this slow-growing, cold, wet forest are clearcut, it takes hundreds of years for the forest to become as productive as it once was for deer, salmon, bears and people. After a clearcutting, there is a short, 15-20 year burst of blueberry bushes and new growth, trees that grow back all at the same height, competing for light and creating a dead zone on the forest floor that can last for hundreds of years. People who have spent years studying and living in the Tongass have compared old growth to a cathedral, full of massive trees and huge beams of light. Regrowing, clearcut forests are more like basement apartments. All that has negative repercussions for wildlife, and for people.

The USDA’s announcement this July was about the best homecoming I could get from my bear guiding trip. It was on par to hugs from my 6-month and two-year-old sons. It shows the USDA is placing its focus squarely where it should be: on the industries (primarily commercial fishing and tourism) that are already thriving in the Tongass, the importance of the Tongass to the people who live here, and on the Tongass’ importance not just to us, but to the rest of America and to the world. The Tongass stores 44 percent of the carbon in all U.S. national forests. That’s huge when it comes to addressing climate change, which we’re all feeling the effects of. In the Tongass, climate change has meant more extreme rain in an already rainy place. Last year, heavy rain in clearcut areas of Southeast Alaska led to landslides that flooded homes and salmon streams — the roots in young-growth trees are not as deep, meaning they don’t stabilize the soil nearly as well. Heavy snows last winter meant for a significant deer die off. In areas that have been heavily logged and lack adequate old-growth winter habitat, at least in northern Southeast Alaska, deer numbers are depressingly low.

Still, I, and a host of locals and visitors, will fill our freezers with fish, game, and forage provided by the Tongass this year. My older son is looking forward to the family deer hunt, fishing, and berry picking trip we have planned for the end of August. It’s the sort of activity that makes my family so appreciative of living here. In the Lower 48, you can’t get more than 22 miles from the nearest road. Here you can step off the beaten path and enter some of the wildest country left on the planet. There aren’t many places where you live next to brown bears, or wolves, or have the choice between going mountain goat hunting, deer hunting, or salmon trolling on the weekend—my two brothers sometimes will do all three. There aren’t many places where you can fill your freezer with enough deer, mountain goat, bear, fish, berries and other wild foods to sustain your family all year. There aren’t many places left where salmon return in the millions each year. This is all dependent on old-growth habitat and a healthy ecosystems.

All the Tongass’ wildness not only makes hunting and fishing possible, but it also creates jobs. Twenty-six percent of Southeast Alaska’s jobs are in the billion-dollar visitor industry or in the billion-dollar commercial fishing industry — which means they rely, in some way, on intact habitat. Less than 1 percent of jobs in Southeast come from the timber industry, which taxpayers have paid hundreds of millions of dollars over the years to subsidize. In the last four decades, we taxpayers have lost $1.7 billion “selling” Tongass trees — while damaging much of what we love about this place and our other economies. Thousands of miles of logging roads already crisscross much of the Tongass. A third of those have culverts that don’t allow fish to pass, and the Forest Service has a $58 million backlog on road maintenance here. The agency has also said it will need $100 million to repair lands, rivers, and streams damaged by past logging.

Despite this, the Tongass is still a wild, thriving place. A full quarter of the salmon catch on the entire West Coast is born in our lakes, rivers, and streams. It’s a spectacle to see thousands of salmon struggling up creeks that wend their way through the shade and protections of old growth trees, brown bears lying in wait for them, and eagles and ravens competing for scraps. Some of the trees here are more than 1,000 years old. Bears carry salmon into the trees, and as the fish decay, the trees soak up ocean nutrients from their bodies. The Forest Service’s announcement means that this thousands of years-old phenomenon is something people will be able to experience and benefit from for generations to come. It also represents the acknowledgement of the importance of listening to and acting on local and Indigenous peoples’ knowledge and input. All six Tribes that had been participating in the process that stripped protections last year withdrew in protest over the way they were ignored and disrespected. Twelve of Southeast Alaska’s 19 federally recognized Tribes later filed a Traditional Homelands petition that would lead to Tribal co-management of traditionally important areas of the Tongass.

I have a few days in town now, but soon I’ll be back on Chichagof Island for a month, guiding a film crew after brown bears on salmon streams. They, and the other productions I work on, come from far and wide to show the rest of the world how amazing the Tongass is. It looks like it’ll be a good pink salmon year, so, hopefully, the bears will be plentiful and easy to work with. I’m looking forward to walking salmon streams beneath the giant ancient rain forest. I’m looking forward to watching pink and chum salmon digging out redds and bears prowling and feasting. My two and half year-old boy keeps asking me to bring him along. He’s been practicing saying “go away, bear!” in case, he tells me, one tries to get him. He always wants to go with me, whether it’s on a two-day deer hunt or a long brown bear guiding gig.

“I’m older,” he says after waiting a few moments.

There is no better dream than that he and his brother, their children, and generations to come will continue to be blessed with all the gifts of the Tongass. I, and most Southeast Alaskans, are hopeful for the future. The work isn’t done, as this decision could one day be undone by a future administration. But it’s clear that the way forward, at least for now, will prioritize the real, thriving, sustainable uses of the Tongass’ forest.

Bjorn Dihle is a lifelong hunter and resident of the Tongass. He’s also the author of A Shape in the Dark: Living and Dying with Brown Bears