As wild turkey populations decline across parts of their range, conservation groups scramble to both invent and reinvent themselves 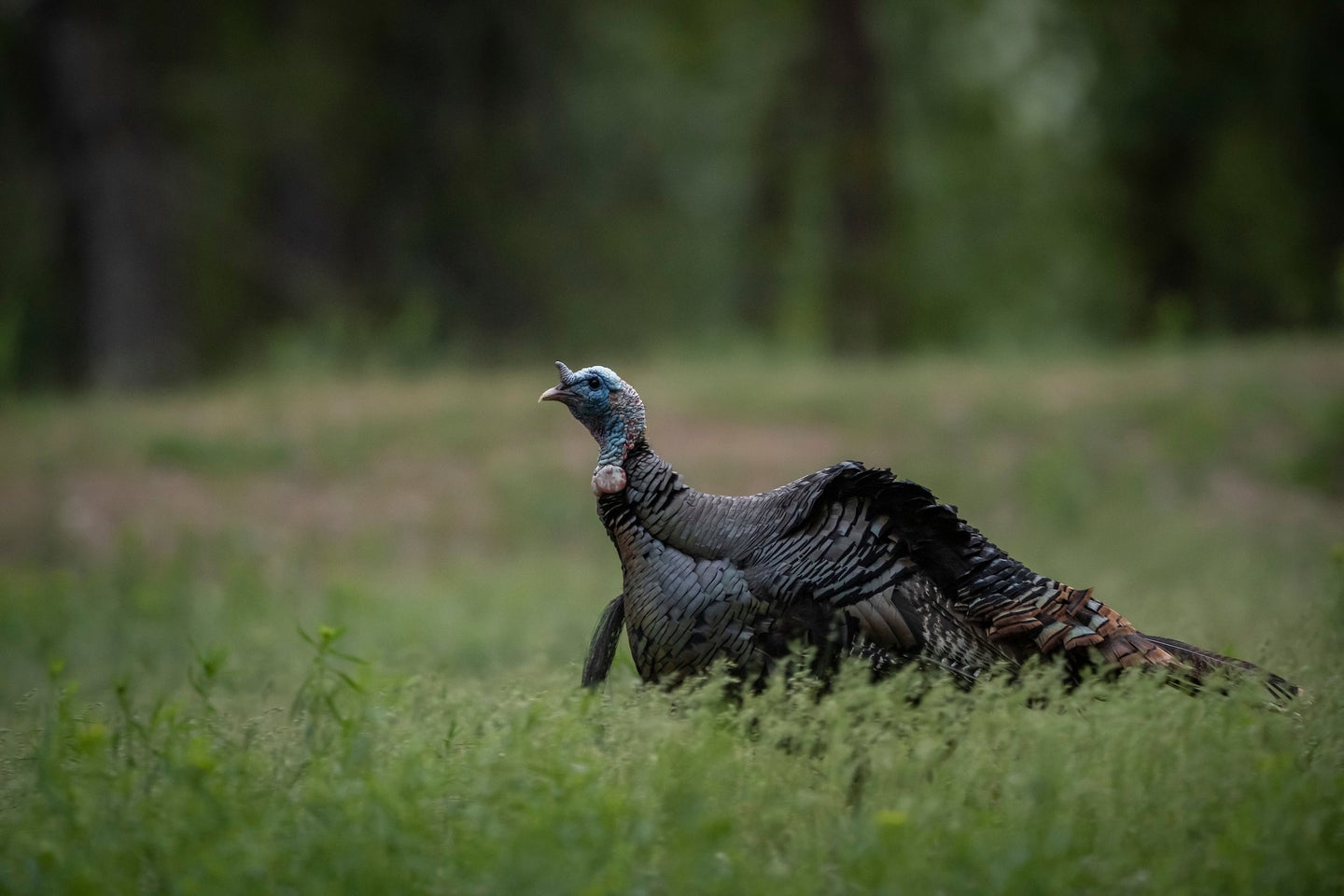 The rebranding of a familiar turkey organization and the birth of a new one come at a time when wild turkeys are facing declines in parts of their range. John Hafner
SHARE

Wild turkeys have long had an outsized role as indicator species. In the folktale of our national symbol, the noble and resilient turkey was passed over in favor of the carrion-eating bald eagle. Later, the disappearance of wild turkeys became a metaphor for the loss of America’s wildness, as settlers cleared forests and planted fields.

More recently, wild turkeys have been emblematic for the recovery of America’s wildlife, as hunters funded agencies that led the return of iconic species like whitetail deer, pronghorn antelope, and yes, long-bearded gobblers. Turkeys have variously occupied roles as first game animals for beginning hunters and as trophies for experienced hunters collecting “slams,” or specimens of every subspecies of the wild bird. Their gobble is the very sound of spring across much of the United States.

Now, the passion that many hunters have for the wild turkey and everything it symbolizes is the basis for the reimagining of one major conservation group, the impetus for the creation of another, and for a growing recognition that maybe we’ve taken turkeys for granted.

The State of Turkey Conservation

The National Wild Turkey Federation has been at the center of nearly every trend affecting wild turkey dynamics since its inception in 1973. Over its 48 years, it’s grown to about 250,000 members and raised tens of millions of dollars to help state agencies increase the nation’s wild turkey flock to between 6 and 7 million birds. The NWTF’s early mission was clear: restore birds to vacant habitat. Its “Target 2000” program started in the 1980s with the singular goal of restoring turkeys to all suitable habitat in the U.S. by the year 2000.

“Well, we accomplished that goal,” says Jason Burckhalter, NWTF’s chief information officer. “There are people who say that when a goal is accomplished, your job is done. But that’s a shortsighted way to look at it. If you are true to your mission, then you are never finished. And our mission, which is ‘Dedicated to the conservation of the wild turkey and the preservation of our hunting heritage,’ is more critical than ever.”

That’s because the national turkey population has been slipping away from its high-water mark, set in the early 2000s after decades of translocations that established flocks in new or historic habitats. In some parts of the country, hunters and wildlife managers now worry that turkey numbers could once again slide so far that hunting seasons might close and aggressive restoration efforts would be required to sustain flocks.

Biologists blame declines on a number of factors, often working in tandem. Unproductive upland and woodland habitat, predators, changing agricultural practices, and even changing climate have all been cited for declines in various parts of the wild turkey range. But nowhere is the decline as apparent or steep as in the buckle of America’s Gobbler Belt: the American Southeast, where biologists are studying whether our hunting seasons and behaviors are compounding the problem.

“There’s been some interesting research on gobbling as related to breeding activity, and how hunting pressure affects both gobbling and breeding,” Joel Pedersen told me last year. At the time, Pedersen was the NWTF’s director of governmental affairs. He is now the CEO of the Mule Deer Foundation. “Researchers are using acoustic signatures—basically recording devices—to listen for gobbles,” Pedersen said at the time. “They’re comparing gobbling activity on unhunted lands, lightly hunted lands, and heavily hunted lands. This is an oversimplification of some pretty complicated research, but researchers have seen an artificial peak in early March, but as soon as hunting seasons begin, gobbling falls off.”

The implication is that hunters are killing the most vocal, dominant gobblers—especially in areas with heavy hunting pressure—and that subordinate gobblers with less reproductive vigor are left to breed hens.

Ron Jolly has witnessed precipitous declines of turkeys in his home state of Alabama, and wants to see more research into causes of population dynamics across the Southeast. He has some early ideas.

“We’ve done a great job of making turkey hunters,” he says. “There are somewhere close to 3 million people hunting turkeys now, and probably more during the pandemic. There’s an estimated 6 million turkeys in the country. If everybody kills one turkey, what’s happened? Especially when you consider all the other dynamics going on in turkey country, I don’t know that that’s sustainable.”

Jolly is the co-founder of an upstart turkey conservation organization, Turkeys For Tomorrow that aims to help state agencies research and respond to turkey declines. The group was formed just this year and already has several thousand “partners,” who contribute funds in exchange for a window decal and inclusion in the group’s communications and outreach.

“We don’t have members,” says Jolly. “That was very important to our founders, that we don’t compete with the [membership-driven] National Wild Turkey Federation. In fact, Becky Humphries [CEO of the NWTF] didn’t discourage us in any way. She offered to help, knowing that we’re after the same goal: to grow the turkey population.”

Jolly notes that many folks who have joined Turkeys For Tomorrow are attracted to the organization out of dissatisfaction with the NWTF.

“There’s a groundswell of people who think the NWTF has lost its direction, and are coming to us, but we are on record as not seeking controversy or to having any interest in dividing our community of turkey hunters. We think there’s plenty of room for both organizations and plenty of work to do on behalf of turkeys.”

But Jolly, who was inducted into the NWTF’s Hall of Fame for his work as an outdoor communicator and videographer for the sporting goods brand Primos as well as Alabama’s Department of Conservation and Natural Resources, acknowledges that the National Wild Turkey Federation may have lost its focus.

“I’m not ever going to say that the NWTF took its eye off the ball, but I will say that the worst thing that ever happened for turkeys in general is when the NWTF and state agencies said ‘mission accomplished’ and stopped funding research.”

Meanwhile, the NWTF is in the midst of a wholesale rebranding that includes a new logo and iconography that aims to make the organization more accessible to younger members, but also to recapture the interest of members who may have strayed from the organization. It’s part of the Federation’s goal to remain relevant as the conservation landscape changes.

But the organization’s decision to move away from its logo of the past 15 years—three walking turkeys—has polarized members, some of whom think the change is a sign that the NWTF is walking away from turkey conservation. Burckhalter says it’s nothing of the sort.

“When we started to reconsider our brand back in 2018, the goal wasn’t to redesign the logo,” he says. “That’s a minor product of our work. We looked at the data and saw that less than 3 percent of turkey hunters belong to the NWTF. That was dumbfounding to us as it should be to any turkey hunter. The purpose of our rebranding project was to remain relevant and grow our mission impact. How do we grow turkey hunting and bring more turkey hunters into our community where we can make a real difference? That is the question that motivates us.”

But the new logo, which features the silhouette of a gobbler’s head and two abstract tridents that are intended as turkey tracks, turkey fan feathers, arrows, or some combination of these, has received a disproportionate amount of derision. On social media, people have likened the new mark to a seahorse bracketed by scallop shells. One Facebook comment said, “If that logo was a bird in the woods, I’d give him a pass.” Another suggested that the NWTF drop its N, to be reduced to the dismissive and exclamatory “WTF!”

Another hunter, Brandon Rich, commented that he’s no fan of the logo, “but I didn’t start supporting the NWTF because I thought the logo was cool and I certainly can’t justify not supporting it now just because I don’t favor the new one. It’s done. Let’s move on and focus on what the mission at hand is, doing what’s best to sustain the wild turkey.”

That’s precisely Burckhalter’s point, though he did offer some insights into what he hopes the new logo and brand expression, including lower-case NWTF on emblems, accomplishes.

“We looked at impediments to participation in the NWTF, and just taking the upper-case NWTF, as an example, there are people who grew up with texting and cell phones who think that we’re yelling at them when we use all caps. Lower case is more inviting. Our three walking turkeys didn’t scale well in different mediums, but mainly it looked like it was a hunting club. Neither of those expressions are welcoming to someone who maybe has never heard of the National Wild Turkey Federation before. Those are the new conservationists we need to be attracting.”

Jolly isn’t so sure the problem in turkey country is unaffiliated hunters. He thinks part of the problem is hunters themselves.

“We are facing the perfect storm,” he says. “So many things have an impact on turkey populations right now: feral hogs, fire ants, maturing hardwoods, but also hunter ethics and behavior. We’ve gotten much better at killing them. Turkey hunting is no longer sitting down beside a tree, yelping three times, and calling in a bird. It’s about reaping and using ground blinds and decoys. There’s a new group of hunters that don’t buy calls or camo. They have a turkey fan and a shotgun and they drive around until they find birds, then stick up that fan in a field and when a gobbler comes running in, they shoot him. That’s not the culture of turkey hunting the way it used to be. The romance of it is gone, that love and respect for a bird’s ability to fool you and survive.”

But Burckhalter sees the problem in turkey country as too few people actively engaged in organized conservation.

“When you have numbers, you have a voice to make a difference with laws and policies,” he says. “More members means greater ability to raise funds to get conservation work done. It’s about market share. Success for me is growing our member ranks so that our larger collective voice can have a positive impact on the lifestyle we all love.”

Meanwhile, in these months between spring turkey seasons, state game agencies across the Southeast are revisiting their turkey regulations, in many cases recommending shorter and later seasons, lowered bag limits, and even restrictions on gear like decoys. Jolly doesn’t think the Southeast’s turkey populations are in peril, but he wants to ensure that they remain in huntable numbers.

“We’re nowhere near where we were [with low numbers] in the 1960s,” he says. “But by God we cannot let it go back there. It’s our mission to make sure that doesn’t happen.”