Proposed gold mines in B.C. are setting the region’s wilderness history and its mining future on a collision course 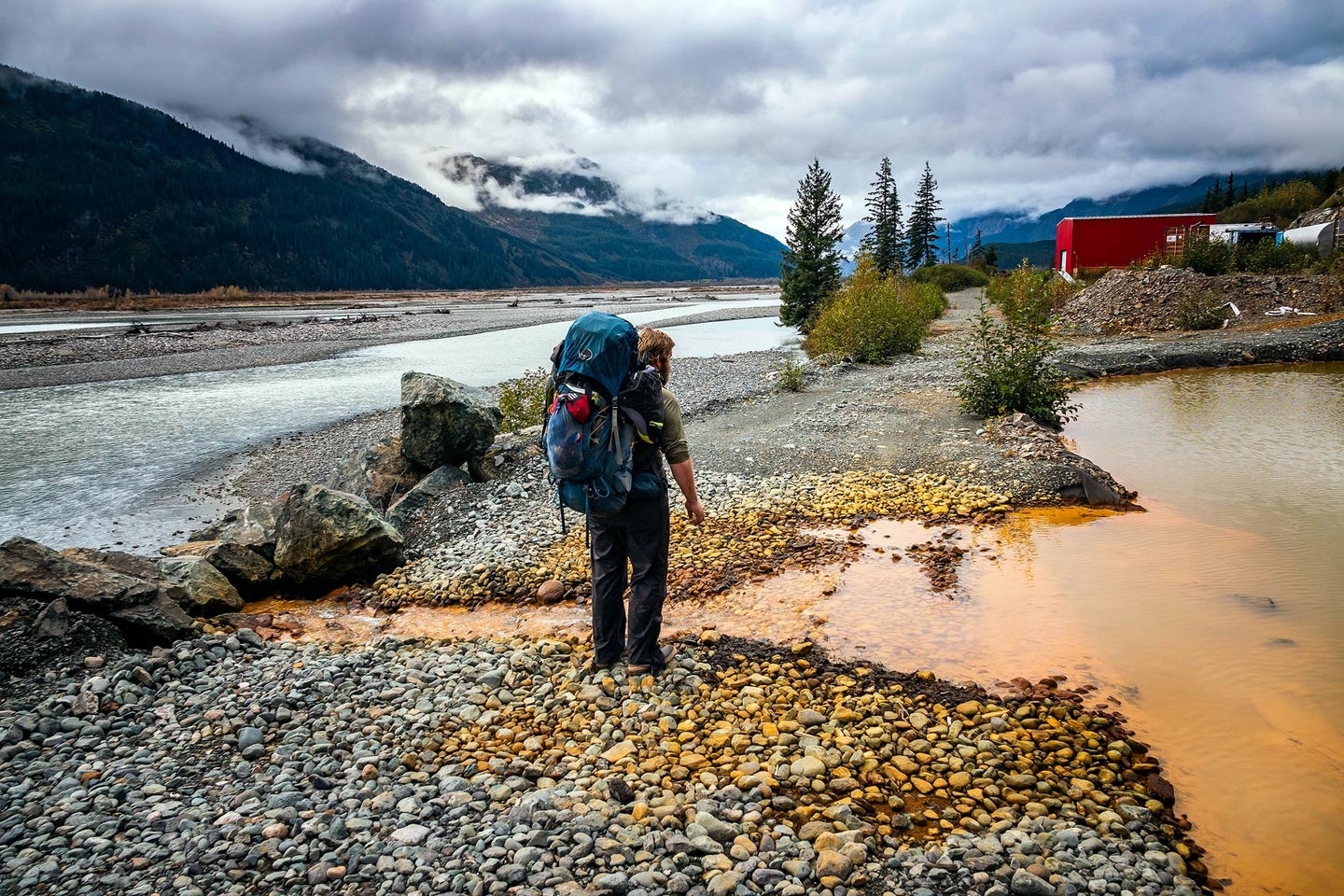 Legendary outdoorsman Bruce Johnstone was born in the early 20th century and lived out much of his life on the Unuk River, which drains into what is now Misty Fjords National Monument, near Ketchikan. (“Unuk” comes from the Tlingit word “Jòonax,” which means “Revealed in a Dream”). Johnstone traveled far and wide over glaciers and mountains surrounding the Unuk chasing dreams of gold. In the early 1930s, he and his brother Jack established a rough prospecting camp on a feeder creek of the Unuk. Soon after, a mysterious creature began stalking the two men. The creature remained hidden in the darkness or brush and would let out terrible groans unlike anything the experienced woodsmen had ever heard.

There are countless stories like this one that come from the Unuk River, along with the massive Stikine River and the Taku Watershed. These enormous “transboundary” watersheds are shared by Southeast Alaska and British Columbia. Together, they’re about the size of Portugal, and they serve as the spawning grounds for all five species of Pacific salmon, which are critical for the food, culture, and livelihoods of Southeast Alaskans. (Salmon support more than 7,000 jobs and add $1 billion into the region’s economy annually).

In B.C., however, the headwaters of these transboundary watersheds are known by mining interests as “The Golden Triangle” for their many rich gold deposits. The recently constructed Northwest Transmission Line in northwest British Columbia has helped spur a new sort of gold rush that involves at least a dozen proposed mines, many of which are classified as “mega mines”, in the region’s sensitive salmon-bearing watersheds.

Oldtimers and the next generation of Southeastern Alaskan outdoorsmen (like me) are more than a little worried about the environmental impact of these proposed mega mines.

The Legend of Old Groaner

Decades after Johnstone had his encounter with that mysterious creature, he shared the story with his mentee, friend, and trapping partner LaVern Beier during their long months trapping together.

“Johnstone said during that first year they heard the groaning they thought it was a wild man,” Beier told me. “They didn’t see any tracks. One of them would always be on guard. Prospectors had been up the Unuk before the Klondike, so they thought it was some old prospector following them around.”

The Johnstone brothers returned the following year. So did the groaning. Before long, they found tracks and discovered their stalker was a giant brown bear. This knowledge wasn’t much solace, especially at night, when the bear became bolder. The brothers dubbed the bear Old Groaner.

In 1935 Old Groaner finally showed himself. Johnstone was in the process of hammering in a notice on a mining claim when the bear snuck up on him. His brother’s dog Slasher leapt for the bear, giving Johnstone time to grab his rifle. It took three shots — one through the brain — to bring the bear down. Old Groaner was giant and partially hairless, his face and skull were damaged and deformed. When Johnstone skinned the bear’s enormous head — the skull measured 17 inches long by 11 inches wide — he found numerous old bullets belonging to a .33 rifle and .38 pistol embedded in the skull and jaw. The right side of the skull had been shot away, and the left side of the bear’s skull, above the eye, was shattered. The wounds had healed over on the outside but internally, they were an infected mess. Four of the bear’s vertebrae and two of his ribs had been smashed — perhaps in a fight with another bear or from an avalanche — and they had fused together. Old Groaner’s death solved two mysteries: why the bear had been groaning, and what became of Jess Sethington, a prospector who had disappeared on the Unuk 12 years before. Search and rescue parties had followed Sethington’s old campfires to Cripple Creek. He’d been carrying a .33 caliber rifle and .38 pistol.

A Wilderness History and Mining Future

Johnstone was born in 1909 and died in 2006. He lived to see the lifestyle and the country altered by civilization. Today, the Alaskan side of the Unuk watershed is part of a national monument. On the B.C. side, 88 percent of the watershed is covered with existing mines or is staked to be mined.

One of the Unuk’s proposed mines, Kerr-Sulphurets-Mitchell (KSM), would create a complex that straddles two watersheds — the transboundary Unuk, and the Nass. It would be one of the largest open-pit mines in the world, and the largest ever built in Canada. The mine would generate 2.3 billion tons of tailings, mine waste that contains toxicants and acid-generating rock that would require treatment for at least centuries, potentially forever, to prevent waters downstream from being poisoned. Almost 6,000 square miles, or 20 percent, of the Unuk, Stikine, and Taku watersheds are covered with B.C. mines and claims. And British Columbia’s mining regulations are poor. They don’t require mining companies to post the money required to clean up their messes before operating, and after a massive tailings dam failure in the Fraser River, just north of Washington state, an independent panel predicted that two B.C. tailings dams would fail every ten years, on average. Naturally, the current industrial stampede has Southeast Alaskans very concerned.

“Canadians have always been rip it up, tear it up,” Beier told me. “They have no environmental standards. When you’re downriver, you have no idea what sort of mining is going on in Canada.”

Beier first laid eyes on the Unuk in 1970, which was 35 years after Old Groaner met his end.

“I was 17, and I thought I was on my way to Vietnam,” Beier says. “I’d never traveled much beyond the game farm I grew up on in Wisconsin, so I wanted to see Southeast Alaska before Southeast Asia. After that visit, I planned to join the Navy before I turned 18 and got drafted. About a week after I got to Petersburg, we flew to the Unuk River in a Super Cub to go moose hunting, and Bruce Johnstone was there, on crutches.”

By that time, Johnstone had long been a legend for many reasons. Perhaps the most noteworthy and least envy-inducing is that he survived a freak attack by three different brown bears at the same time at the mouth of the Unuk one fall in the late 1950s.

Johnstone saw something in Beier. He convinced him not to enlist in the Navy, and to instead take his chances with the draft, in the hopes of making the young man his trapping partner.

“I didn’t know any better,” Beier says. “With me he saw someone he could mold. In hindsight, he really wanted to prove to his friends and family that he could still do the all-day Alaska stuff that he used to do. But he was on crutches, so he needed someone to look out for him and do the muscle work.”

Beier’s draft number wasn’t called, so, the following spring, the two went up the Unuk to trap. Today Beier is a respected brown bear expert. He’s collared over a thousand brown bears during his 40-year  career working for Fish and Game. It was Johnstone who helped set him on that path.

“For getting hired by Fish and Game, my diploma was my trapping with Bruce,” Beier says.

The Alaska Department of Fish and Game has long been conducting salmon surveys in the Unuk, Stikine, and Taku watersheds. The transboundary rivers are especially vital for king salmon. All species of salmon are struggling in Southeast Alaska, but king salmon are the worst off. They were declared a stock of concern on the Unuk, and soon to be stocks of concern on the Taku, and Stikine, as well. Historically, 80 percent of the king salmon that return to Southeast Alaska are from the transboundary watersheds. While there are factors other than mining to blame — including climate change — B.C.’s planned mega mines will only further decimate salmon runs.

In 2014 I paddled the Stikine River shortly before production began at the giant open-pit Red Chris Mine, located near the headwaters of the Stikine and Iskut watersheds. The Red Chris is owned by Imperial Metals, the same company that owns the Mt. Polley Mine. A few months after my paddle trip on the Stikine, the Mt. Polley tailings dam burst, releasing ten million cubic meters of contaminated water and 4.5 million cubic meters of fine toxic tailings into the Fraser River watershed. The Red Chris has the same tailings dam design.

Despite decades of demands from Southeast Alaskan fishermen, Tribes, and conservation groups for B.C. to clean up the mine, the site is still polluting. Even hardhats and tools haphazardly left out near the entrance of the adit were in the exact same place they’d been eight years before, when Chris had last visited. And the Tulsequah Chief is nothing compared to the size and scope of many planned transboundary mines. It operated for only a few years. In its entire life, the Tulsequah Chief mine moved the same amount of rock that the KSM would move in just five days of its predicted 52-year life. The Tulsequah Chief’s 65-year legacy of poisoning the Taku, Southeast Alaska’s greatest salmon river, is a good indicator of what’s in store for the future unless something changes.

In order to enact change, the U.S. and Canada should call for International Joint Commission (IJC) involvement. The IJC was established by Canada and the United States under the Boundary Waters Treaty of 1909 – which explicitly states that “waters flowing across the boundary shall not be polluted on either side to the injury of health or property on the other side.”

Many of B.C.’s abandoned, existing, under-developed, and planned mines are constructed and operated in a way that’s not conducive with salmon habitat and the long-term health of the region’s ecosystem. While mining can and should occur, no one should be able to poison their neighbor’s rivers in the process.

It’s hard to imagine a Southeast Alaska without real salmon runs, but every day that these mines go unchecked brings us closer to that reality. That’s why this spring, Southeast Alaskan fishermen, Tribes, municipalities, and organizations, across the region are urging President Biden to demand that Canada pause their mining stampede in British Columbia’s transboundary rivers until both countries implement an agreement on international watershed protections, and agree to ban B.C.’s failure-prone tailings dams in international watersheds.

One of the transboundary mines is named Brucejack, after Bruce and Jack Johnstone. The area was wilderness when the Johnstone brothers were prospecting it; now it’s an industrial complex with ever-expanding exploratory roads penetrating the surrounding country. The glaciers that the Johnstone brothers once traversed are rapidly melting, revealing new mineral deposits. Meanwhile, B.C. is in such a hurry to put gold in the bank that they’re planning on tunneling beneath these glaciers — they are already trucking atop them. In 2021, a landslide came close to taking out the Brucejack mine.

When Bruce Johnstone died at age of 97, Lavern Beier was foot-snaring and collaring brown bears on Cripple Creek, where Old Groaner had stalked his friend a lifetime ago. Beier poked around a bit looking for his friend’s old camp, but the creek had changed and the forest had grown in.

“For Bruce, prospecting was more about the chase than getting rich,” Beier says.

The real “gold” to Bruce Johnstone, according to folks who knew him, was the lifestyle of adventure, wild game, and salmon that places like the Unuk still offer, at least for now.

Bjorn Dihle is a lifelong resident of Southeast Alaska. He’s a wilderness writer and advocate for Alaska’s fish and wildlife. Follow him at instagram.com/bjorndihle/ or facebook.com/BjornDihleauthor/