U.S. Army Corps of Engineers paves the way for a controversial mine in a region of Alaska known for the largest sockeye salmon run in the world 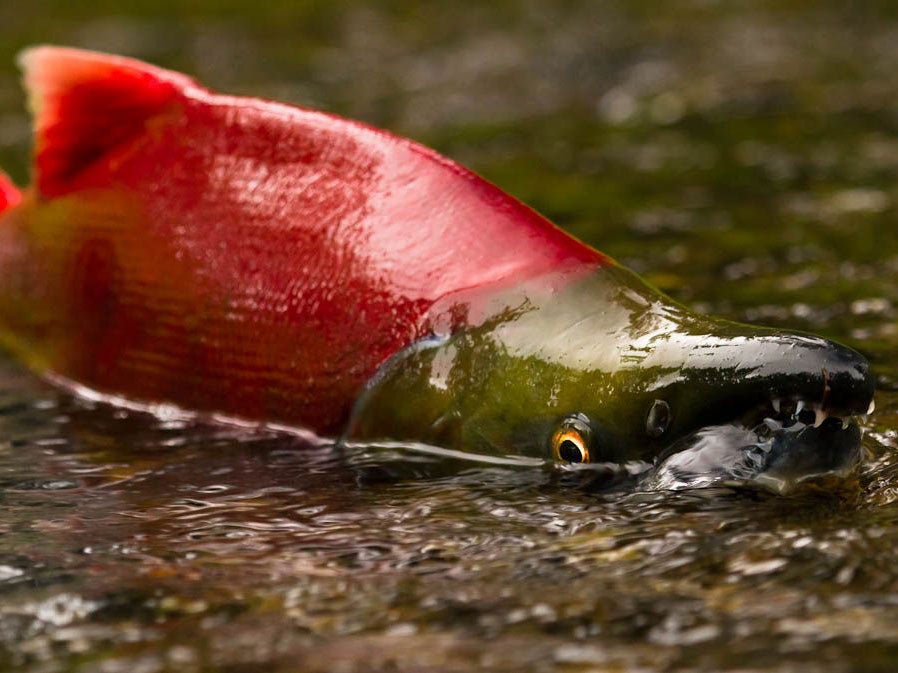 Editor’s note: Bjorn Dihle is a lifelong resident of Alaska, and an advocate for Alaska’s wild habitat and natural resources. You can find him on Instagram and Facebook.

Today, a host of conservation and news organizations received via the U.S. Postal Service the final Environmental Impact Statement from the U.S. Army Corps of Engineers for the proposed Pebble Mine in Alaska. This paves the way for the federal permit the controversial mine needs in order to proceed, which will likely be issued within 30 days now that the final Environmental Impact Statement has been released. With the current political atmosphere, the Pebble Partnership is now in position to bulldoze through the final state and local permits required to start development in the wild country of the Alaska Peninsula, where a fully realized mining district would likely spell the death of Bristol Bay and its incredible sockeye salmon runs, the largest on the planet.

Many Alaskans, myself included, have strong ties to the area and its incredible natural resources. In a recent poll, 62% of Alaskans said they’re opposed to Pebble. Former governor Jay Hammond and former senator Ted Stevens (both Republicans and likely the most influential Alaskan politicians in recent history) strongly opposed the mine. Many believe you can either have salmon or you can have the Pebble Mine, but you can’t have both.

And many Alaskan outdoorsmen and women have good memories from hunting and fishing the area. My dad had taken me and my two brothers on a caribou hunt there when we were teenagers. I remembered a blond grizzly rising from the brush and glowering as a herd of caribou flooded across the hilly tundra north of Lake Iliamna. My younger brother and I knelt, watching two big bear cubs appear. We’d just about gotten within rifle range of a group of massive white-maned bulls but, now, with the bears nearby, we weren’t eager to push our luck. We backtracked to our dad without firing a shot. A few hours later, we lay on the tundra as hundreds of caribou filed by us only 40 yards away. Twenty years have passed since that once-in-a-lifetime hunt, but the memories of thousands of caribou moving across the tundra and red salmon filling the waterways of that big wild country remain crisp to this day.

I hadn’t heard of Pebble Mine back then, nor did I realize that we were hunting atop the proposed mine’s deposit of gold, copper, and molybdenum. A few years after that hunt, geologists announced the deposit to be the world’s largest untapped resource of gold and copper, and estimated its worth at $500 billion. The idea of a mine in that location was met with staunch opposition in Alaska. And for good reason—the region has the world’s largest run of sockeye salmon, which is vital for the area’s mostly Native population and the $1.5 billion commercial fishery that supports 14,500 jobs and an array of other industries, including guiding sport anglers, hunters, and bear watchers.

Alannah Hurley, a Yup’ik resident of Bristol Bay and the executive director of United Tribes of Bristol Bay, testified before Congress that “Pebble’s proposal to build a mine at the heart of our watershed has been a dark cloud over Bristol Bay for the last 15 years.”

Triston Chaney, a Yup’ik and Athabaskan fisherman, doesn’t mince words when it comes to Pebble. The deposit lies partly beneath the Nushagak River watershed, which has sustained his people for generations.

“We don’t like Pebble. We don’t want it,” Chaney says. “They couldn’t have picked a worse spot to dig a big hole. This could damage our whole livelihood. Life here revolves around fish and if that went away…”

For Melanie Brown, a Yup’ik and Inupiat commercial fisherwoman, salmon connects her to her culture.

“Bristol Bay would become a desolate place without salmon,” Brown says. “Salmon don’t just nourish the people; they nourish the land. It’s sad to think that could be disrupted. The disappearance of salmon has happened all over the world. My hope is our collective consciousness can keep projects like Pebble from destroying places like Bristol Bay.”

During the Obama administration, Pebble was blocked from moving forward. The Environmental Protection Agency (EPA) released a three-year peer-reviewed scientific study that concluded a mine “would result in complete loss of fish habitat due to elimination, dewatering, and fragmentation of streams, wetlands, and other aquatic resources” in a significant portion of the region and that “these loses would be irreversible.”

Read Next: The Tongass National Forest is a Wilderness on the Chopping Block

The EPA invoked the Clean Water Act, potential investors fled, and Pebble appeared to be dead. During the beginning of Trump’s administration, the EPA agreed the environmental risks were too great and announced they would block the mine from going forward.

That all changed in May 2017, when Scott Pruitt, the recently appointed director of the EPA, met with Tom Collier, a veteran D.C. lobbyist and the CEO of the Pebble Partnership. A few hours after Pruitt and Collier’s meeting, the EPA announced it was rescinding its plans to protect Bristol Bay. In late 2017, the Pebble Partnership filed for a mining permit from the United States Army Corps of Engineers. Collier, who stands to get a $12.5 million bonus if he gets Pebble permitted within four years, came forward with the idea of applying for a smaller mine that would operate for 20 years and only recover a small percentage of the deposit. There would be less environmental degradation, Collier pointed out, than the original 78-year mine plan. The “small” mine would still be massive. Its industrial footprint would cover hundreds of miles of the Alaska Peninsula with hundreds of miles of roads, toxic-sludge-filled lakes, power plants, deep water ports, and a natural gas line.

Some critics also argue that Collier’s 20-year mine isn’t economically feasible. Richard Borden, who has three decades working in the mining industry and once was a permitting expert for Rio Tinto, the world’s second largest mining corporation, predicted Collier’s model for Pebble would lose billions of dollars. The Pebble Partnership needs investors to build all the infrastructure and those folks wouldn’t want to commit to a 20-year mine. Still, Collier pushed on, claiming the mine would make a profit and not negatively impact the salmon and people of the region. After the Corps of Engineers released its draft Environmental Impact Statement in late February 2019, the Department of the Interior concluded the report relied on “subjective, and unsupported claims” from the Pebble Partnership and was “so inadequate that it precludes meaningful analysis.” Some locals say that the Corps of Engineers was in collusion with the Pebble Partnership, or, at the very least, under the sway of the current political atmosphere while forgoing any legitimate scientific process.

Alannah Hurley put it simply: “The Corps has made it clear that our people, science, and fact do not matter in this process.”

Since applying for a permit in 2017, the Pebble Partnership had led the public to believe it was planning a transportation route to the mine called the “southern route.” On May 22, 2020, on the eve of the Corps of Engineers releasing its final review and decision on whether to issue Pebble the primary federal permit it needs, the Corps of Engineers announced it was changing its preferred transportation route for the mine to the “northern route.” The northern route is the only transportation route able to accommodate the 78-year mine plan, which is economically feasible and would likely attract investors. The “northern route” would cross land owned by the Bristol Bay Native Corporation (BBNC), Pedro Bay Corp, and Igiugig Village Council; all three entities have made clear that their land will not be available to accommodate the mine.

Dan Cheyette, BBNC Vice President of Lands, said in a press release, “There are numerous problems with the northern transportation route. It has not been vetted and scrutinized by both the public and cooperating agencies on the same level as other transportation routes. It crosses lands that are not and will not be available for the purpose of building Pebble Mine. And most importantly, it is a clear sign that PLP has no plans to stop at its current 20-year mine plan.”

On June 18, Collier announced the Pebble Partnership will pay at least $3 million in dividends to residents of Bristol Bay who register. As the mine becomes more profitable, Collier claims, dividends will increase. Alannah Hurley called Collier’s dividends a “false promise” and “predatory and shameless.”

Tia Shoemaker, a brown bear and moose hunting guide who grew up on a remote homestead on the Alaska Peninsula, is calling B.S.

Shoemaker’s hunch that the Pebble Partnership’s proposal is smoke and mirrors is shared by many who oppose the mine. Drew Hamilton, a bear viewing guide on the Alaska Peninsula—bear viewing brings in an estimated annual $34 million annually—agrees. Hamilton works tirelessly raising awareness of how Pebble threatens the greatest population of brown bears left in North America.

“By applying for a permit for a 20-year mine that won’t pay the bills, they are either lying or stupid, and I don’t think they are stupid. It is just red flag after red flag and our politicians’ commitment to the sham ‘process’ has gone beyond reasonable, to the point that they are just wasting our time and resources,” Hamilton says.

The battle for Bristol Bay isn’t over yet. With enough public support, the EPA could still veto the mine under the authority of the Clean Water Act, as it has before. But barring that, or big changes in national and state politics, Pebble Mine will eventually become a reality. I had this in the back of my mind when my brothers and I took my dad to the Alaska Peninsula for a moose hunt last September, in honor of his 70th birthday. King Salmon was buzzing with anglers, hunters, and bear viewers who’d come from all over the world to experience the region’s incredible fish and wildlife opportunities.

We glassed the country for days, looking out on miles of tundra and giant glacier-covered volcanoes, waiting for a bull to appear. I thought about how, during our caribou hunt 20 years prior, I believed Alaska would stay wild forever. I believed the streams would always be full of salmon and that there would always be places to make that hunt of a lifetime. I know now that isn’t the case. I was wondering if Bristol Bay’s natural wonders would still exist in the decades to come when two massive bulls appeared out of the tundra and snapped me back to the present. We grunted and racked brush, mimicking a rival bull. The moose steadily came our way, aggressively shaking their antlers—a true picture of the wild.