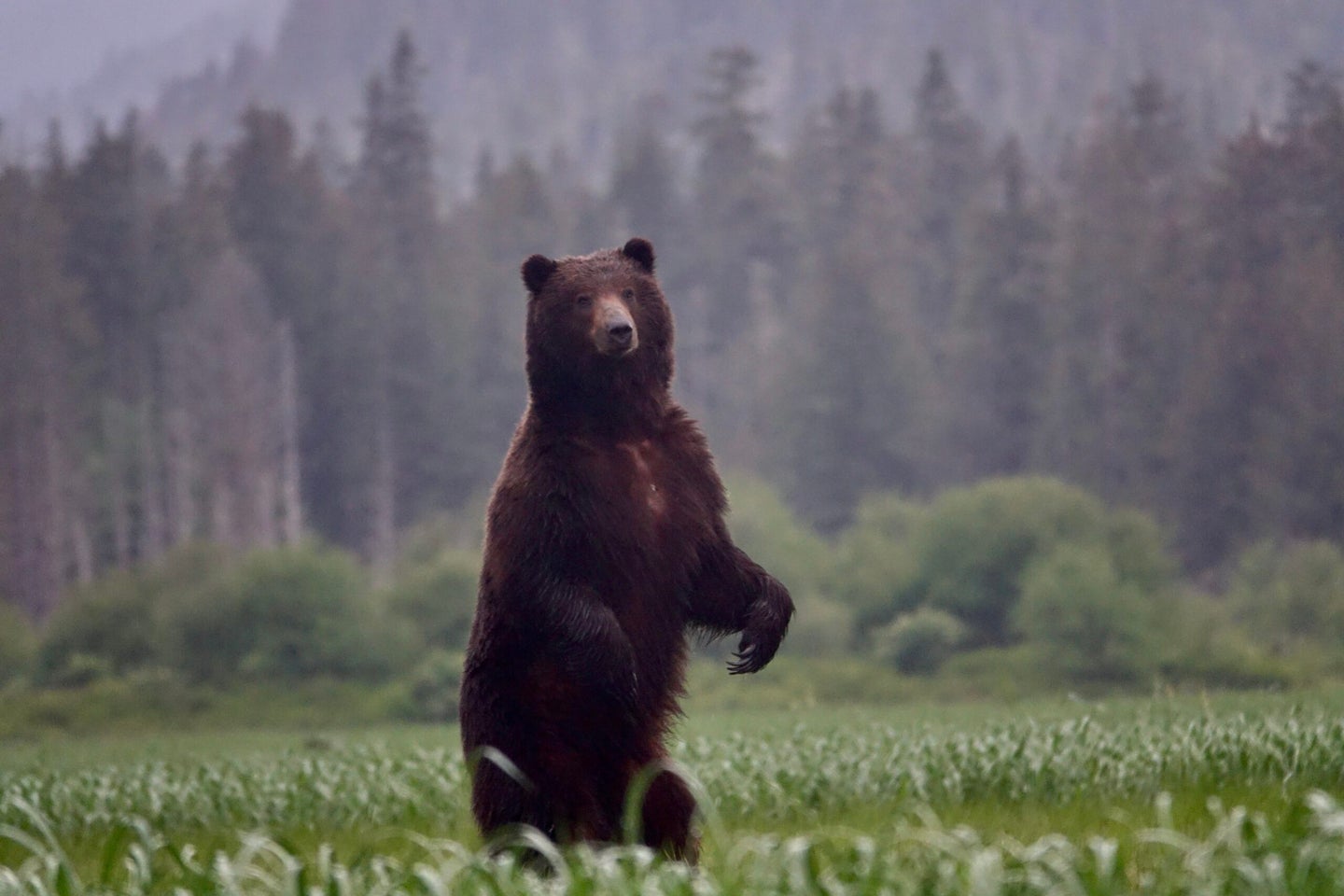 A brown bear stands on his hind legs in the Tongass. Bjorn Dihle
SHARE

I was four or five when I first encountered a brown bear in the Tongass National Forest. I still remember it clearly: a mostly-eaten young bear lying dead in a small stream, surrounded by hundreds of spawning pink salmon, beneath a wall of giant trees and salmonberry bushes. Even then, I understood that I was witnessing something powerful and unique. After three more decades spent working, living, hunting and fishing in the Tongass, my awe and appreciation of my home has only deepened.

Today, the U.S. Department of Agriculture, under orders from President Donald Trump, announced the agency is axing the Roadless Rule and opening up more than 9 million currently protected acres of the Tongass for industrial development, including clearcut logging of old growth trees. At 16.7 million acres, and encompassing nearly all of Southeast Alaska, the Tongass is viewed by many as a vast, untouched temperate rainforest wilderness. But much of its old-growth forest has already been clearcut logged. The aftermath of these cuts has degraded, even destroyed, habitat critical to salmon, Sitka blacktail deer, mountain goat, and brown bears.

In 2001, after Southeast Alaska’s logging industry collapsed, the Roadless Rule was established in those 9 million acres. That section included most of the remaining productive old-growth forest habitat, stopped corporations from clearcutting those forests, and prevented the building of new logging roads.

The vast majority of Southeast Alaskans saw the establishing of the Roadless Rule as a step in the right direction to preserving our economy, which is heavily dependent on tourism and commercial fishing, and our lifestyle, which is rooted in hunting and fishing. The significantly subsidized logging industry, on the other hand, amounts to less than 1 percent of Southeast Alaska’s economy. On a global level, the Tongass, besides being a mecca for the visiting sportsman and woman, is now being recognized as a vital piece of minimizing the effects of climate change. As the world’s largest relatively intact temperate rainforest, the Tongass stores 650 million tons of carbon and acts as spawning grounds for 25 percent of the West Coast’s salmon catch. More than a million visitors come here each year, on average, to experience the Tongass’ natural beauty.

It shouldn’t come as a surprise that the majority of Southeast Alaskans are angered by the Forest Service’s announcement. There’s been no shortage of irrationality and other forms of insanity in the agency’s decision-making process. During the comment period, 96 percent of testifiers said the Roadless Rule works and should be kept in place. More recently, five Southeast Alaska Native tribes sent a letter to Sonny Perdue, Secretary of Agriculture, and Victoria Christiansen, Chief of the U.S. Forest Service, “formally revoking our cooperating agency status in the Alaska Roadless Rule process,” due to being ignored during the Final Environmental Impact Statement for the Alaska Roadless Rule process. None of the tribes wanted a full exemption from the Roadless Rule.

“We refuse to endow legitimacy upon a process that has disregarded our input at every turn,” the tribal leaders wrote. “Our Tribes have no intention of being party to a decision that will lead to the degradation of our homelands and our way of life.”

The tribal anger mirrors that of most Southeast Alaskans, who are dependent on the land for their way of life—myself included. Even numerous old Southeast Alaskan loggers, who saw the clearcut boom and bust days of the 70s and 80s have recently stated publicly that removing the Roadless Rule is a step in the wrong direction. These are people who, like any sane Southeast Alaskan, want to see a sustainable logging industry in the region. But trying to revive clearcutting, and building more logging roads (on top of the thousands of miles that currently exist), is the opposite of what the region needs.

I make most of my living by guiding film crews and photographers after brown bears, wolves and other wildlife that are dependent upon intact habitat. The meat my family eats consists of deer, mountain goat, moose, and salmon. To me, the removal of the Roadless Rule is like having someone telling you they’re doing you a favor by breaking into your house, robbing you, and, while they’re at it, shitting on your dinner table. Alaska’s governor and congressional leaders applaud the removal of protections. Apparently, they’re more interested in benefitting foreign interests like China—whose economy, unlike the U.S.’, will benefit from clearcutting the Tongass—and a handful of loggers, many of whom are from the Lower 48, than representing the people who actually live in Southeast Alaska.

Read Next: The Tongass National Forest Is a Wilderness on the Chopping Block

Late last August, I climbed a mountain on Admiralty Island to hunt for Sitka blacktails. As I picked my way through the towering old growth forest toward the alpine, I paused to examine where a bear had not too long ago eaten a buck. There was more bear sign than deer sign in the high country; something I figured had to do with the unusually cold, wet, and stormy weather we’d had that summer. Still, as I crept along ridges and peered into different nooks and crannies that bucks like to hang out in, I was surprised not to see a single deer. I made camp at last light and stared out in the gloom. Miles away, I could just make out a tiny indention in the shoreline. It was there, so many years ago, on the small creek that I encountered that first brown bear.

I lay awake long into the night, thinking of the hundreds of bear encounters I’ve had since. I thought of deer: my hope of encountering a buck in the morning, and of bringing him home and feasting on his delicious red meat. I thought about this mountain, and other mountains, that had gifted me and my family countless deer. I thought of my dad, who had hunted here when he was young. I thought about the future of my home if the Roadless Rule was removed. I thought of my 18-month old son. This rainforest set the groundwork for his reality. His first paired words were “brown bear,” learned from looking at and living with actual bears. Will my boy have the same opportunities to work, hunt, and fish in the Tongass that I’ve had? Will he have to move somewhere else?

I woke before first light and quickly packed up camp in heavy winds and fog. I hunted for hours but encountered nothing, not even a bear swaggering across a slope in search of a berry patch. I began hiking down when a doe appeared at tree line. I wished for a buck, but was thankful to be in the mountains, where my thoughts could come and go without being infringed upon. As I sat watching the deer, the clouds broke and revealed an expanse of mountains, forest and ocean. Even then, I knew that the Roadless Rule was going to be axed. It would be axed due to the political climate, and Alaska’s state leaders, and the Forest Service’s lack of backbone and integrity. I knew that those despoilers, who view Alaska as a resource colony, would win this particular battle over the fate of my home.

I also knew that the war over the Tongass is far from over. For anything good in this world, you have to fight tooth and nail. And there is way too much good about the Tongass to let it go without a fight.

Bjorn Dihle is a lifelong resident of the Tongass. You can reach him on Instagram or Facebook.