Are Drill-Powered Augers the Future of Ice Fishing?

Drill-powered ice augers might seem like a cheap novelty, but they are more capable than you think 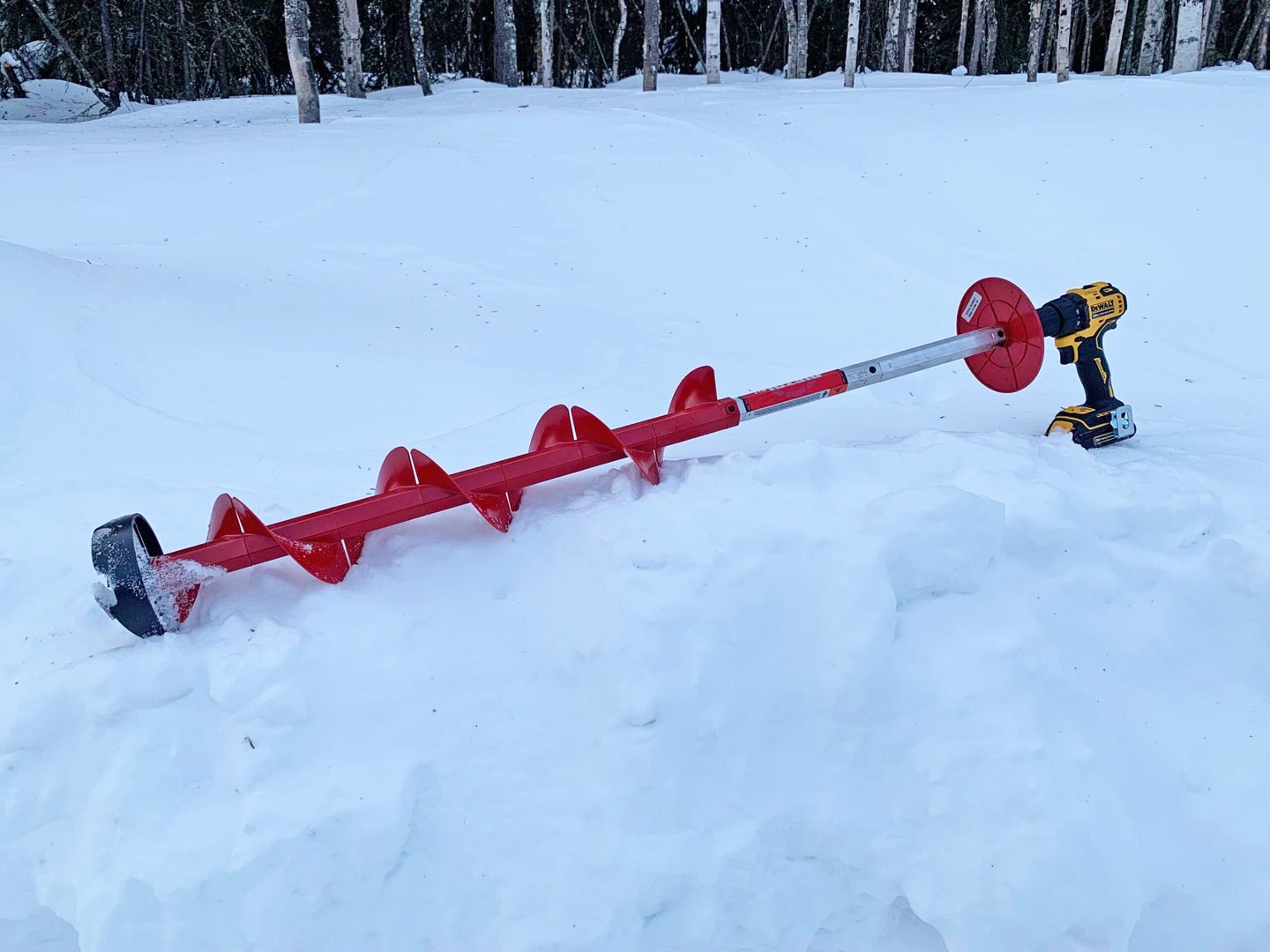 The 6-inch Eskimo Pistol Bit is lightweight and efficient, even with the 8-inch extension. Tyler Freel
SHARE

“Sit with your back to the wind,” My dad would say.

I don’t have a lot of memories of ice fishing as a kid, but that was one of them. I was sitting on a five-gallon bucket, trying to tolerate the cold wind in snow pants, a Starter brand pullover coat that every kid had in the 1990s, and one of those three-hole ski masks that never seemed to fit quite right. We were fishing a high-mountain lake in Colorado—with a group of several other dads and their boys—and if it weren’t for being a fishing-obsessed kid, it would have been pretty lackluster. I remember pulling a few brook trout through the ice, and that our crew had a single gas-powered auger among us. I was green with envy as I watched it motor through the ice while furiously spinning the awkward hand auger I’d been handed to use. It would be two decades before I saw a drill-powered auger.

For me, the limiting factor in ice fishing was always equipment—an auger in particular. Expensive and useless for any purpose other than ice fishing, a motor-powered ice auger can be an investment that many would-be or casual ice-anglers just don’t want to make. The classic hand-powered auger works, sure, but if you’re boring through more than six inches of ice, they’re awful. Beyond the first week of November here in interior Alaska, the lakes already have drivable ice, and a motor-powered auger is a serious benefit. In fact, I didn’t really do a whole lot of ice fishing on my own before buying one. By mid-December, ice can be two or three feet thick, and four or five feet thick in the spring.

The Drill-Powered Auger Isn’t a Gimmick

Electric-powered ice augers have become more prevalent in recent years, particularly the cordless-drill type. I’d heard about augers like the K-Drill, Nordic Legend, and others, but it sounded like a gimmick to me. These augers are basically just lightweight shafts with cutting blades and nylon flights that utilize the power from a cordless drill—that you probably already have in your garage or tool kit. I wasn’t sure about how well these lightweight augers would really work, especially in thick ice. I was used to a gas powerhead, and seriously side-eyed the prospect of trying to use a cordless drill to power an auger. I’d finally bought a gas-powered 10-inch Eskimo auger for fishing big pike and lake trout, and it worked plenty well for stocked lakes with my kids too.

Eventually, in a moment of impulsive weakness, I pulled a drill-powered auger off the stack at a local sporting goods store—an Eskimo 6-inch Pistol Bit. I was on my way to the local lake with my kids to fish stocked trout, and my curiosity could wait no longer. After pulling onto the lake, I set up the popup tent, got the heater going, and slid the bit into the chuck of my 20-volt DeWalt drill. I was shocked at how quickly it bored through the two feet of ice. Giddy, I quickly punched the other holes we needed, plus a couple extra for fun.

I continued to use the Pistol Bit throughout the winter, both for fishing with my kids and exploring other waters. There is some nuance involved in using it, but it’s an incredibly accessible and effective tool. On one trip, I drilled 18 or 19 holes through 40 inches of ice on a single battery. Even with an 8-inch extension and drill, it’s much lighter than a gas or full-size electric auger, and easier to tote around if you’re dragging or carrying everything on your back. I think that for most ice-anglers, this style of power auger makes everything else obsolete.

The Drill You Need

The drill-powered auger is a brilliant example of ingenuity and maximized utility. Many of us already have a cordless drill or could certainly find one useful if we don’t. Before you run out and buy a drill-auger, there’s a couple things to note about what it takes to run them. What you already have might be perfect, but you want to make sure.

Most of these 6- and 8-inch augers can be used perfectly well with your average modern 18-or-20-volt cordless drill. These drills—which have pretty much become the standard—have plenty of power to get the job done, but it helps to have a few things:

Beyond this, the requirements are somewhat negotiable. In their product info, most augers will say something about needing to have a stabilizing handle for your drill—some augers include a handle on the auger itself. Unless you’re using a heavy-duty drill or are unsure of your grip, you’re fine with just using the drill for 6-inch augers. I simply get a good grip on the drill and hold the back of the drill tight with my free hand. But a stabilizing handle isn’t a bad idea for 8-inch models because of increased torque. Without a stabilizing handle, you have a higher chance of hurting your hand or wrist.

Using a drill-powered auger is simple, but there are a few key things that will help you get the most out of it. There are plenty of tutorial videos out there, and if you keep these things in mind, you’ll be in good shape.

A drill-powered auger can be useful to any ice angler. They’re flat-out lighter and easier to transport and use than gasoline or more traditional-style battery-powered augers. They’re cheaper too. A lake trout fisherman that needs a 10-inch hole through four feet of ice might need a gas auger, but I’ve found a pistol bit to be incredibly useful for punching quick holes to depth-check or chart lake features, even if I’m not using it to fish through. Any ice angler who fishes through medium-thicknesses of ice, for fish that will fit through a 6-or-8-inch hole ought to find the drill-auger superior to just about any other option. Even if you need a gasoline or propane auger for some of your fishing applications, you’ll still find a drill-powered auger useful.

Power tools and batteries are expensive, but a good drill is useful for many things. Paying the same amount of money—or more—for a gas or battery-powered traditional auger just doesn’t make sense for many applications. Even if you have to go buy a drill, charger, batteries, and auger, you’re set up with a tool that provides a lot of usefulness beyond the fish shack—and you should really have a good drill anyway. A drill is also incredibly useful for installing ice stakes for your popup fishing hut if you use one.

Drill-powered augers are easy to use, transport, and drill lots of holes with. If you’re fishing in a tent or hut, they are quiet and won’t gas you out of there. On cold days, I hurry to get the tent set up, heater going, and kids inside. Then, I can carefully drill the holes exactly where I want them without mess, noise, or fumes. For hard-charging ice anglers, they can be another valuable tool, or even your primary auger. For just about anyone who wants to try ice fishing, or is hesitant about committing to a traditional auger, it’s a fantastic option.