He was trying for perch, but thanks to a little luck, this angler was able to land a 25-pound tiger muskie 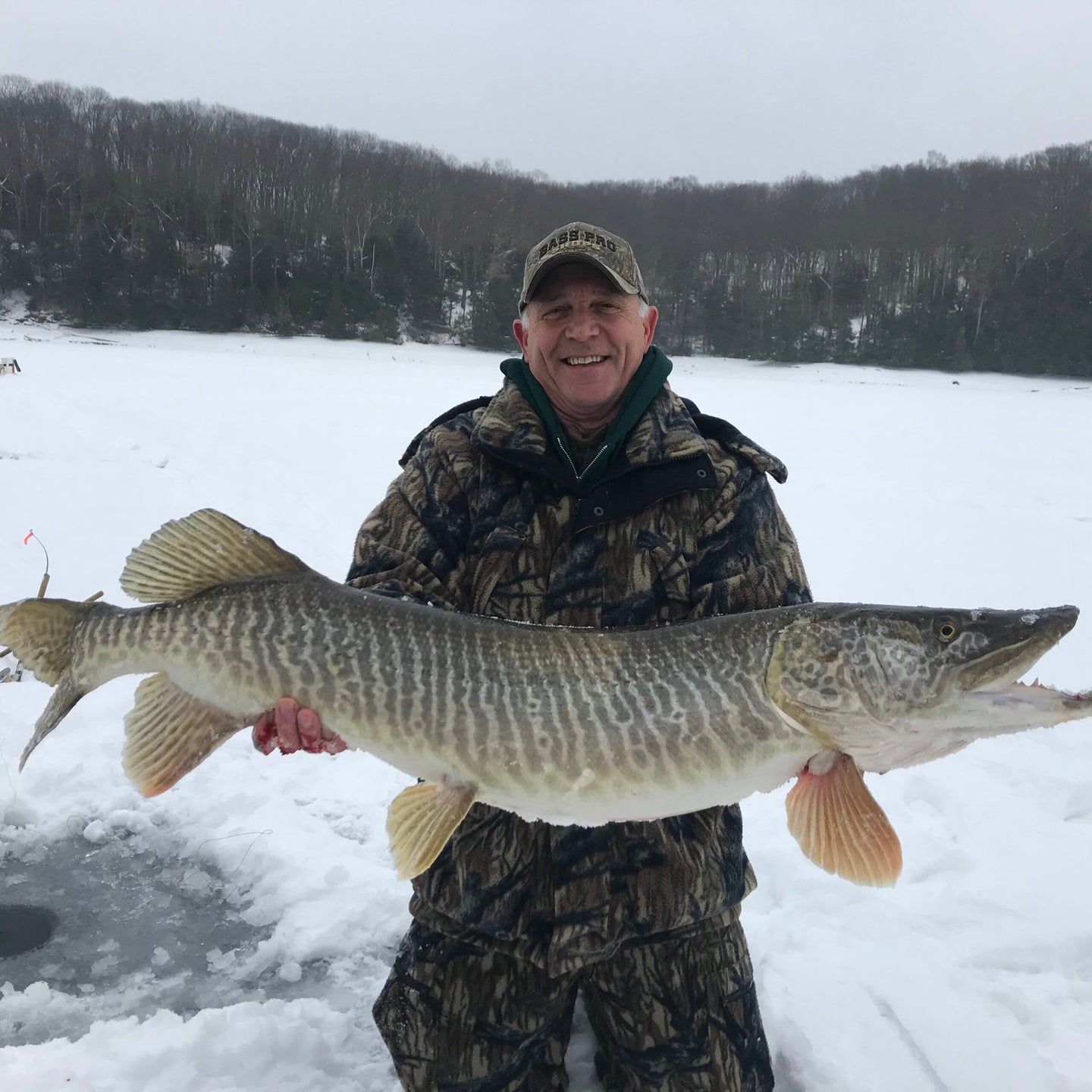 Fortunately, Pennsylvania angler Daniel Salter was using 15-pound test line while ice fishing on Keystone Lake last week. It was Salter’s first time fishing the lake, which is located in Westmoreland County. He was using a tip-up rigged with a small live shiner on a single hook when something much larger than a perch took the bait.

“I could tell it was a big fish,” Salter told the Pittsburg Post-Gazette. “The line was really going out. I waited until it stopped, and I set the hook.”

He battled the fish for about 20 minutes, giving and taking line on the small tip-up reel and working diligently to keep his line from abrading against the ice around the 8-inch diameter hole.

“When it got nearer and [it] swam past, I could see how big it was,” said the angler from St. Marys. “I wondered if we could get it through [the hole].”

Somehow, Salter and his friend were able to muscle what turned out to be a muskie through the hole and slide it onto the ice. Then they put the tape measure on the muskie while getting it on the scale. It weighed 25-pounds and measured 45 ½ inches long. While the state allows anglers to keep tiger muskies over 40 inches long, Salter simply took a few photos and released the fish.

“We ice fish all over the place, all the lakes,” Salter said. “I never dreamed I’d catch something like that.”

Tiger muskies are a hybrid between a northern pike and a muskellunge. Tigers are typically sterile, but thanks to Pennsylvania’s robust hatchery program, they can be found in 34 lakes and 18 rivers throughout the state. The Pennsylvania Fish and Boat Commission stocks roughly 7,300 tiger muskie yearlings (averaging 12- to 14-inches long) every other year in these water bodies.

Tigers grow faster, but are typically smaller, than pure-strain muskies. They are uniquely and beautifully marked with swirling green and white vertical lines along the flanks that resemble tiger stripes. They also have a mouth full of long and sharp teeth attesting to their lineage to pike and muskies.

While Salter’s fish is one to be proud of, larger tigers have been caught in the Midwest. The IGFA world record for the species is a massive 54.25-inch fish that weighed 51-pounds, 3-ounces. It was caught on July 16, 1919 by John Knobla on Lac Vieux-Desert, which is on the Wisconsin-Michigan state line east of Land O’Lakes.

Correction: The original version of this story misidentified the lake and county in which the fish was caught. The muskie was caught at Keystone Power Dam in Armstrong County.