First and last ice might be best, but just a few adjustments in your tactics can help you land more fish during the middle of the season 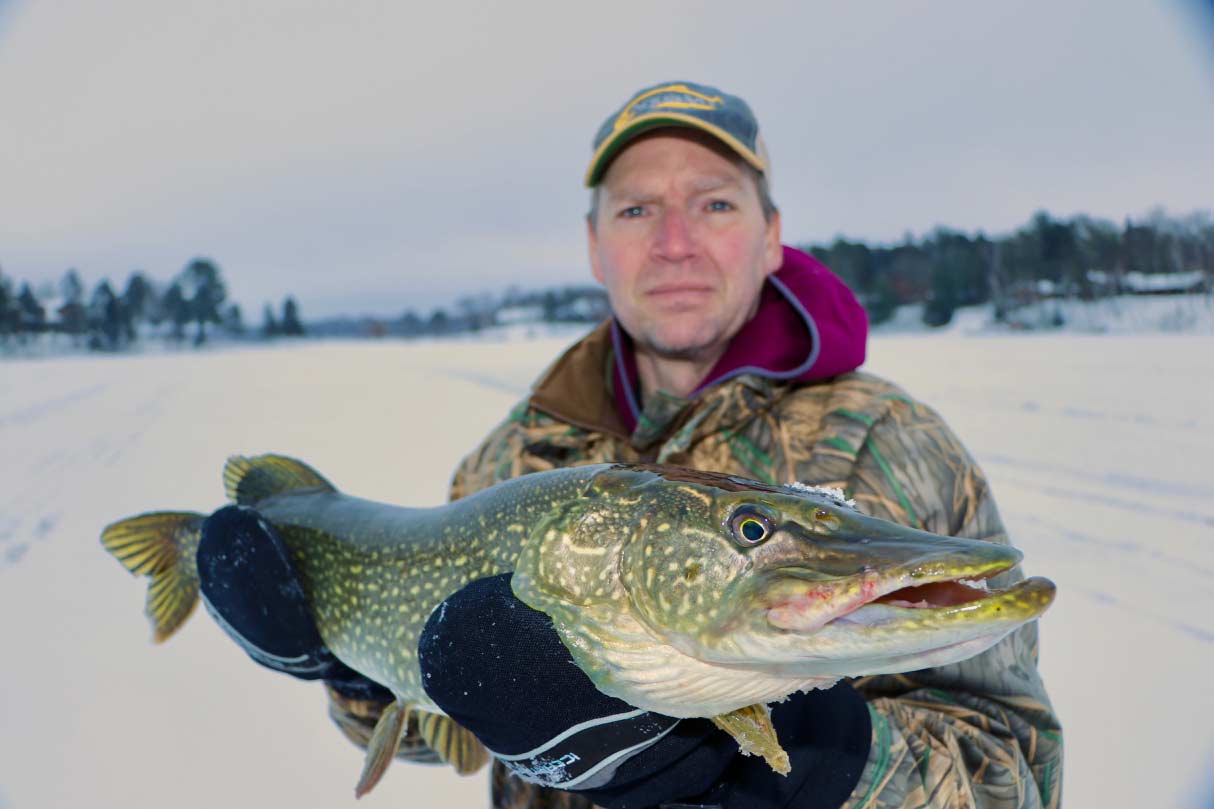 Nothing gets hard-core ice fishermen more excited than fishing on first or last ice. It’s during these windows of opportunity that fish are most easily located and triggered into striking. In reality, though, the first and last ice periods are brief—typically measured in days—and are often fraught with challenging or unsafe ice conditions.

The bulk of the hardwater season is comprised of the mid-winter period. The ice cap has thickened to relatively consistent, reasonably safe levels and continues to grow with every frigid outburst sent south from Canada. In some locales, full-size trucks and SUV’s are pulling wheelhouses across the frozen surface. Shanty towns are springing up over mid-lake structure and deep basins. Ice fishing derbies, with contestants sometimes numbering in the thousands, offer an opportunity to enjoy some friendly competition and terrific camaraderie. But the inescapable fact is that mid-winter ice fishermen cuss the conditions as loudly as whitetail deer hunters bemoan the October rut-hunting lull.

Why is it so challenging, especially when compared to the relative ease of the early and late ice periods? One of the primary factors is snow cover. Snow reduces light penetration on the ice, and a thick blanket of snow can dramatically darken the water column. Less daylight can make things easier for low-light predators, like walleyes and crappies, but this comes at a cost: the death of healthy, oxygen-producing aquatic vegetation. Green weeds beneath the ice are an absolute oasis of fish activity, from the smallest shiners to the largest gamefish, and thick snow on the ice will rapidly turn attractive green weeds into a fish-repelling brown mass. Fewer green weeds mean lower dissolved oxygen levels, especially in the shallows, further reducing fish activity.

The impact of reduced light penetration on the water’s temperature beneath the ice must be considered as well. The mid-winter snowcap scatters the sun’s warming rays in the infrared portion of the spectrum. As a result, much of the water column, except for the water near the bottom in deep basin areas, is as close to the freezing point as you can get without turning crunchy.

This is the trifecta of challenges that all mid-winter ice anglers hate: low light, low dissolved oxygen, and low temperatures. Nevertheless, this is no time to hang your head in despair. Consistent hardwater success can be yours, especially if you make use of a targeted approach that addresses our three primary challenges.

1. Get Some Eyes Underwater

Once January settles in, my underwater camera systems become some of the most important implements in my fish-finding toolbox. The primary benefits of underwater cameras are, of course, the unique visual perspectives that only a full-color video feed can provide. With a camera, you can easily distinguish between green and brown weeds, focusing shallow water efforts in the most productive areas. You can also use a camera to monitor your lure while fishing, so that you can set the hook when you see a fish strike, rather than waiting to feel that bite. This is a significant advantage when fishing for lethargic mid-winter panfish, which can inhale and reject a bait without even causing a sensitive spring bobber to twitch. Some cameras also have an integrated thermocouple that provides the water temperature at the camera’s depth. With this feature, you can quickly locate the warmest available water, and frequently, the most active fish.

For mobile, hole-hopping anglers, the Aqua-Vu Micro Revolution camera is a terrific choice; it fits perfectly into the pocket of your bibs, has a long-lasting, lithium-ion battery, and features a unique camera cable management system that allows you to rapidly deploy and retrieve the camera optics. A camera like this belongs on your shortlist of gear that you shouldn’t leave home without.

Regardless of your mid-winter target species, it’s important to start thinking like a mid-summer bass angler. Intense summer heat makes bass less active and frequently drives them deep. Two of the most productive dog-day presentations for bass—the Ned rig and the drop-shot rig—are finesse techniques. Small baits, thin line, and subtle movements are the recipe for mid-summer bass success, and this same mantra applies to mid-winter ice fishing.

Read Next: How To Rig Your Ice Fishing Rods And Reels For Any Fish

For bluegills, begin with a micro tungsten jig—one that is 3mm or 4mm in length and weighs 1/50 to 1/80 of an ounce. The advantage of tungsten is its high density relative to that of lead, providing for a small profile jig that offers less resistance as it falls through the water column, which is easily inhaled by moderately interested bluegill. Leave the high-action soft plastics in the tackle box, and instead, dress the jig with a couple of spikes or a single waxworm. I use an 18-inch leader of 3-pound-test fluorocarbon and connect that leader to my 4-pound-test braided mainline with a quality swivel. The swivel helps minimize bait spin, which can easily spook lethargic fish. Some bluegill aficionados will downsize further, using extremely thin 1- or 2-pound-test monofilament. However, the difficulties associated with tying robust knots with such a thin fiber, coupled with the number of break-offs that occur when an oversized crappie or bass eats my bluegill bait, make me gravitate toward a slightly thicker, and more abrasion-resistant, fluorocarbon.

Instead of using loud rattlebaits and aggressive jigging minnows, you’ll catch many more mid-winter walleyes on tip-ups or by using a deadstick presentation with a live minnow. Set your tip-ups in high percentage areas and focus on the most productive time of the day: twilight. My favorite way to fish for walleyes is to set my lines along the deep edges of remnant green weed beds, or within 5 feet of the base of a sharp breakline that separates a shallow flat or reef from surrounding deep water. Use a small hook and a lively minnow, and distribute enough split shot weight within a couple of feet of the bait to prevent it from swimming out of the strike zone. If you’re going to deadstick with a rod and reel, select a longer ice rod with a more moderate action that flexes readily when a fish strikes and offers very little resistance—until it is too late and the walleye is headed topside.

Many mid-winter panfish and gamefish can be found in the lowest portion of the water column in relatively deep water. Yet, we should not ignore those fish that suspend well off the bottom in these same areas. Many times, these suspended fish are the most active, and therefore most catchable, members of the group.

I frequently find crappies around the rims of deep basins; if a basin area plunges to 50 to 60 feet deep or more, crappies will often be around the basin’s edges, in 25 to 35 feet of water, forming large schools that graze on larva and small baitfish. It pays to target the highest-riding fish in any school of crappies you find. Often, these fish might only be half-way down the water column—12 to 15 feet below the ice in 25 to 30 feet of water. These fish are, by far, the most aggressive and easiest to catch. I suspect that these high-riders are making use of the available, filtered sunlight—or moonlight—to silhouette baitfish against the bottom of the ice cap while actively hunting for a meal.

Finding these fish, and staying with the school as it moves, requires a lot of holes in the ice. Most crappie hunters will spend a chunk of time turning the edges of the basin into Swiss cheese, drilling a grid of 25 to 30 holes before ever dropping a line. You’ll appreciate a clean, quiet, lithium-ion powered auger, like the Jiffy E6 Lightning, for carving up the ice and making it possible to stay with the roving schools of mid-winter crappies.

Read Next: How to Icefish for Panfish Like a Pro this Winter

Once the holes are cut, focus your attention on your sonar unit to find fish and trigger strikes. A CHIRP sonar unit like the Humminbird ICE HELIX 7 provides not only the depths of the suspended fish, but also the excellent target separation you’ll need to distinguish individual fish within a large group as they approach your bait. The historical perspective of a traditional sonar view also provides insights about the response of specific crappies to particular bait motions—is a pair of short hops followed by a pause triggering more strikes than a nervous quiver? You can either struggle to remember those details during a long day on the ice, or get an immediate, visual reminder from your sonar display.

Northern pike are also notorious for riding, and eating, high in the water column as the winter wears on. The origin of this behavior is rooted in a big pike’s opportunistic feeding tendencies, coupled with the number of larger baitfish that die during the winter. These winterkill baitfish float slowly toward the ice cap, and large pike will cruise high in the water column as they look for easy meals. Forget about jigging spoons and other aggressive pike lures; these pike are feeding on dead bait just beneath the ice, so give them exactly what they’re looking for. Use tip-ups to suspend large, dead sucker minnows within five feet of the ice cap. Frozen smelt are another great deadbait option. You won’t have to worry about a live bait swimming into the weeds or tripping the flag on its own; indeed, once the flag flies, it’s time to set the hook and handline the alligator of the northland.