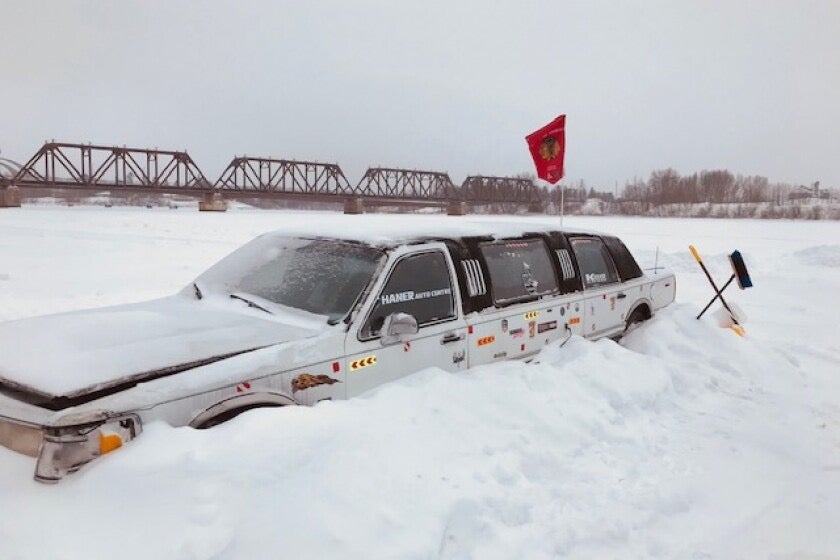 The ice-fishing limousine is parked on the Ontario side of the Rainy River. Vaughn Murray
SHARE

If there was ever any doubt that ice fishermen are a classy and creative breed, that was quashed a few weeks ago when Vaughn Murray parked an ice-fishing limousine on the Rainy River. Located near the Highway-11 bridge that connects the towns of Baudette, Minnesota, and Rainy River, Ontario, the ice-fishing limo is now available for daily rentals and it will be parked on the ice for the remainder of the season.

The 1994 Lincoln limousine will easily accommodate four anglers, and it has all the creature comforts that a dedicated ice fisherman requires: a heater, a built-in bar, and four 10-inch holes in the floor. Murray rents it out for $100 per day (Canadian dollars, or $78.32 USD), and that price includes fishing rods and minnows. Anglers can access the limo through Murray’s backyard, as the vehicle is parked roughly 100 yards off his dock. Since it’s on the Canadian side of the river, you’ll need a valid Ontario fishing license if you want to drop a line.

Murray, who’s lived on the Ontario side of the Rainy for the past 32 years, says he’s long had his eye on the used limousine that was parked over in his neighbor’s yard. It wasn’t until this fall, after his neighbor sold the place, that he approached the new owner and the limo came up in conversation.

“I said, ‘How much you want for it?’ and he said, “Get it out of my yard and it’s yours,” Murray explains. “So, I just drove it over here. The reverse has gone out but forward still works.”

By the time the river had a good 12 inches of ice built up, Murray’s project was taking shape. He drilled through the floor, used a Sawzall to cut four 10-inch holes, and dropped some plastic sewer pipe through the holes. Then he plowed a small road from his dock to the river and parked the four-wheeled shanty out on the ice. He says the limo’s just a short walk from his dock, where he spends a good chunk of the year catching walleye.

“You wouldn’t believe it, and I’m not bullshitting you here. But I’ve probably caught 15,000 walleye off my dock in the 32 years years I’ve been here,” Murray says. “Spring and fall fishing here is just crazy.”

Murray then spruced up the place with a few Elvis Presley posters and some vintage Jim Beam bottles. He installed an electric heater, which is powered by an extension cord connected to his house. (He explains that he usually pre-heats the Lincoln with a propane heater and then uses the electric heater to keep it warm.)

In the short time that he’s had the limo open for business, he’s already had several groups reserve the limo for the day. Most of them come from nearby, he says, but in recent weeks he’s been getting a lot more phone calls from interested parties in other parts of Canada and the U.S. He refers to his new venture as “Fu-ken-eh Limousine Ice Fishing,” but he says pronunciation is key.

“All you Americans say it wrong,” he jokes. “It’s FOO-ken-eh. You shouldn’t be swearing when you pronounce it.”

“We just can’t believe how it’s blown up. He’s been on the phone all weekend,” says Murray’s wife, Melanie. “It started out as kind of a joke. I was like, ‘Yeah, yeah, just do it to keep yourself busy,’ because winters are pretty long and we haven’t been able to travel.”

She says they’re now in the middle of building an Airbnb on the property. And who knows? The Murrays might even find another limo and turn Fu-ken-eh into a full-fledged fishing lodge. North American anglers are always looking for the next newest place, and like Murray says, “Nobody’s every fished out of a limousine before, eh?”