Olivia Laine and Chris Benedict are addicted to ice fishing. This giant 20-pounder is their biggest fish yet 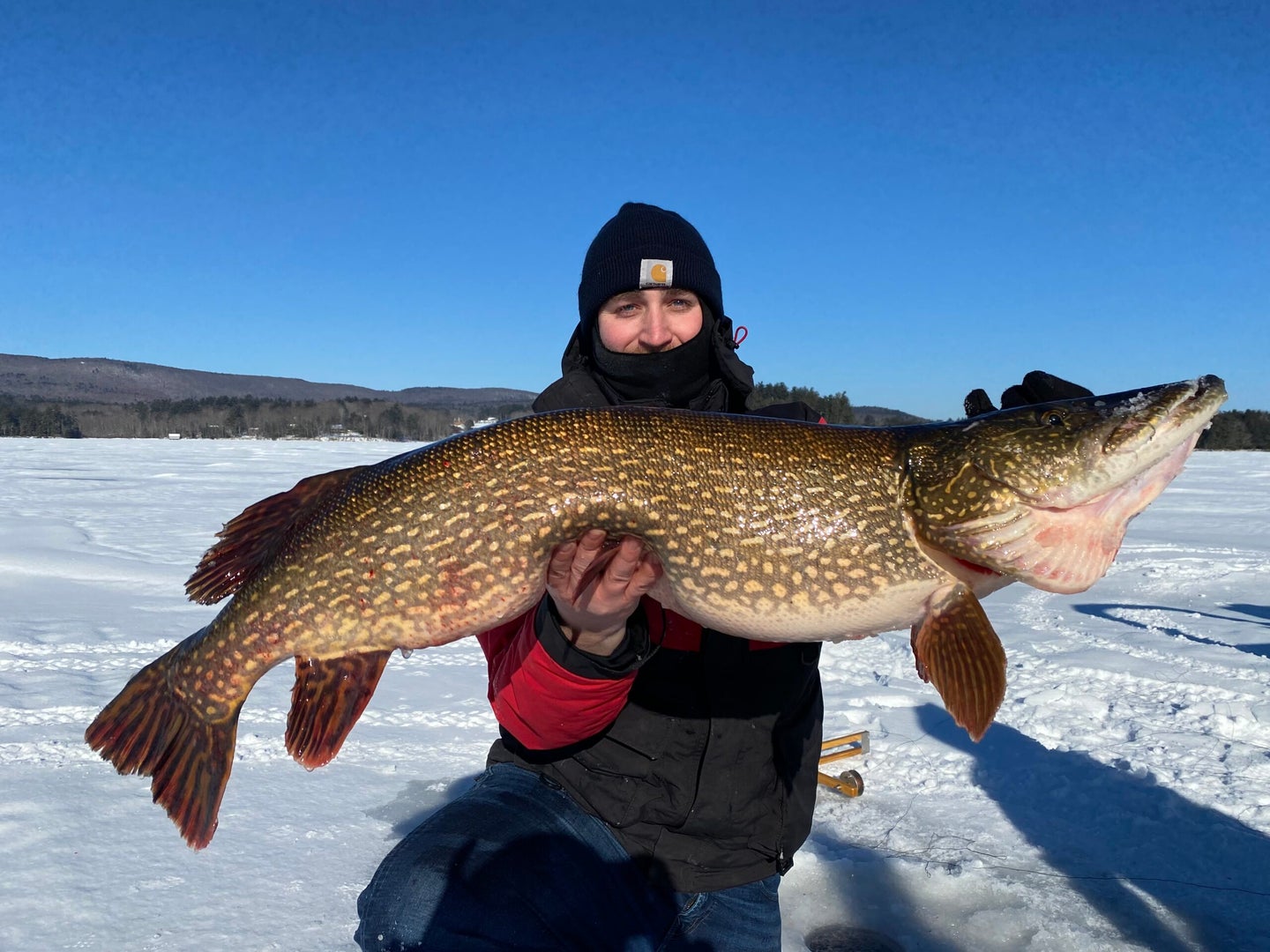 Maine natives Olivia Laine, 27, and Chris Benedict, 28, are a fishing team that specialize in catching fish through the ice.

Three years ago, they started a YouTube Channel—Fishin4Adventure—that shows the remarkable success they have landing a wide variety of fish species on hard water. The Rockland couple have fished all their lives in Maine, so documenting their outdoor adventures seemed natural, especially during the pandemic when everyone was under lockdown. Their most recent catch of a 20-pound pike through the ice is their biggest fish to date. They were fishing the Belgrade Lakes region during a cold 2-degree day. The pike hit a live golden shiner soaked beneath a tip-up, which Benedict and many Mainers call a trap. They had set two baited tip-ups and when the flag on one tip-up popped up indicating a strike, they ran to it to haul up the fish.

But as they neared the tip-up, a second flag popped up on another tip-up. Benedict knew the second hit was from a bigger fish because that tip-up started to move and pull over, indicating a giant was hooked below the ice. When Benedict got to the reel the line was nearly gone, as the huge pike took most of it. He fought the fish for minutes; the heavy line cut grooves in the ice hole edges from battling the pike. Finally, after a seesaw battle with the fish, Benedict drew the pike close to the ice hole. The pike’s head barely fit through the 8-inch opening. Its was so girthy, Benedict struggled to pull the fish through. That pike is the biggest freshwater fish they’ve caught, weighing more than 20 pounds and measuring 40 inches long.

“We have a good general knowledge of the state’s lakes and what they hold, and the state website has a lot of helpful information for species to target in lakes throughout the state, plus the kind of native forage fish living in them,” says Benedict. “One of the first things we do when we catch a fish is to open it and inspect its stomach to learn what kind of forage fish its been eating so we can use that type bait to catch more of the sportfish we’re targeting.”

Preferred ice fishing live baits they couple use include smelt, shiners, daces, suckers and nightcrawlers. Most such baits are for their prime targeted species such as pike, trout, and bass. They catch panfish, too, but mostly white and yellow perch. Where to drill holes on a chosen lake for ice fishing can be difficult for anglers to determine, and this Maine fishing team doesn’t leave lake location to chance.

“We fish a lot of the lakes during open water fishing season, and learn where the lake contours, structures and choice places are located to catch fish when winter ice fishing season begins,” says Benedict.  “Weed beds, rock piles, deep points are all good places for ice fishing. We pinpoint those spots with GPS in summer, then return to them in winter. We also use a Navionics app to learn lake contours and structure good for winter fishing.”

“We can tell when we hook a trout because it shakes its head violently,” says Benedict. “We catch a lot of trout in shallow water, often just 2 to 5 feet deep, because they’re cruising shallows under the ice looking for food.”

Through experience they’ve learned that live minnow baits hooked just beneath the dorsal fin are best, rather than hooked through the nose, lips or head. They prefer circle hooks for pike and bass, smaller bait-style red-colored hooks for trout.

Benedict is a merchant mariner, working on an Alaskan ship for two weeks, then two weeks home back in Maine. Olivia is a dental hygienist and works her schedule to coordinate with Benedict’s.

“When I’m home in Maine, Liv and I get outdoors as much as possible, fishing mostly, but some hunting, too,” he says. “Her love for Maine’s fishing and the outdoors is the same as mine, and marriage for us is imminent.”