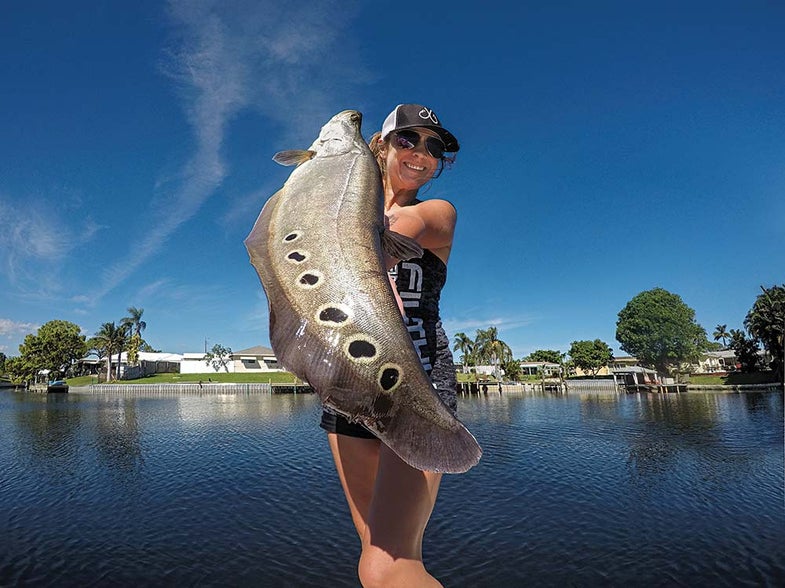 If you’re a believer in urban legends, you may have already heard the one about how Hurricane Andrew’s widespread destruction in southern Florida in 1992 resulted in the invasion of Burmese pythons, iguanas, and a rogue’s gallery of other voracious reptiles and fish. Whether that’s fact, fiction, or something in between, what is undeniable is that a population of non-native fish species boomed, and has morphed from incidentally caught oddities into targeted trophies—at least among a slightly offbeat crowd. Although peacock bass were intentionally stocked by the Florida Fish and Wildlife Conservation Commission, it’s unclear if the snakeheads, clown knifefish, and Mayan cichlids were merely flushed down someone’s toilet and flourished in Florida’s tropical waters, or if they arrived on the crest of hurricane-altered ocean currents, but they’re darn challenging—and a blast—to catch.

The promise of scoring on a Florida Freak Show Slam is precisely why Sean Reilly and I hopped a flight from New Jersey to meet up with New York transplant “Crazy Alberto” Knie. I couldn’t get away from other work duties for long, and Knie was the only guy I could think of with enough stamina to hit the canal systems for 32 hours straight. Knie, as it turns out, had been dialing in the outcast lineup of fish for years.

“The clown knifefish is the unicorn of them all,” he said when we met at the airport in Ft. Lauderdale. “We may have one or two shots all day and all night long. But we’ll see how that goes once we catch a few other species.” Knie’s fishing hole was like no hotspot I’d seen before. Our circuitous backroad route took us past shabby, dilapidated houses, through retirement communities, and under buzzing overhead power lines until we reached his secret waters—a stagnant canal that didn’t look like it could support any form of marine life.

We prepared for battle late in the afternoon with three relatively light setups: 7-foot rods matched to 5000-class spinning reels spooled with 30-pound-test braided line. Terminal tackle consisted of orange slip bobbers set 3 feet above 30-inch lengths of 25-pound fluorocarbon leader, and size B split shot 10 inches above a size 1/0 Octopus hook. Live shiners were the bait of choice for these beasties, and as the sun set, the irony of firing live bait into a dead pool struck me. It was all reminiscent of the tactics I used on an eel-fishing trip back on my home rivers in New Jersey. For a long while, the slip bobber drifted ever so slowly with the light wind, until the bobber finally disappeared below the surface of the slack water. I grabbed the rod to set the hook, but the float popped back up—swing and a miss.

“You’ve got to be quicker on it, man,” Knie hollered.

Luckily, I had my chance again as the second float disappeared. This time, I connected. I buckled down as if I were battling a small grouper, and ultimately wrenched a 4-pound peacock to the net. Seven other peacocks fell just as darkness hit, but it was time to move.

Send In the Clowns

With their elongated heads, huge under-slung jaws, and humped backs, clown knifefish are commonly seen in saltwater aquariums. Florida’s first wild-caught knife was taken in Lake County two years after Hurricane Andrew hit, but they are now found throughout Palm Beach County. They’re aggressive feeders that Knie prefers to fish for at night.

From our position atop a culvert bridge, we stared into the still water of a dead-end canal. Through the dark, we could make out occasional swirls of feeding knifes. It was midnight by the time we floated our first shiners away from the bridge and into a gently flowing current seam. An hour quickly passed without a touch when the sky cracked with thunder, and in true early-fall Florida fashion, we got soaked in a deluge of rain. Amid flashes of lightning, we could see a sinking bobber and hear line zipping from Reilly’s reel. Sean jumped on the rod and set the hook.

“How do knifefish act on the take?” I asked.

Read Next: Catching Peacock Bass on the Rio Negro

“They peel off line super fast, then you set the hook—immediately,” Knie said, never taking his eyes off the other rods. “They will shake and jump as many times as a tarpon. They will try to wrap you around bridge pilings. And then the real fight comes. When you try to net them, they are like moray eels. Always remember that the hardest part of the fight is the end game. Just like that. That’s him. It’s a clown.” Reilly instinctively maneuvered the rod, deftly pulling the fish around bridge pilings. The fish ran 25 yards in less than three seconds, then leaped in a 10-foot arc. Knie scuttled down the embankment with the net as I illuminated the scene with a headlamp.

Indeed, it was. Sean exhaled deeply but managed to keep tension on the line as the spotted, flat-sided oddball slipped into the net.

It was all I needed to get my adrenaline pumping, but time was ticking away—six hours into knife fishing and we had landed only one. As we waited for another to eat a bait, we cast out red wiggler worms on the same float rigs. Dozens of Mayan cichlids—think fish-tank Oscars—came to hand in a furious barrage. We busted off two more knifefish, fought plenty of peacocks, and Knie landed an 8-pound snakehead.

No, I did not land a unicorn. But seeing Reilly and Knie do battle with the freshwater freak show was far more fun than a trip to Disney World.