The two anglers didn't do anything illegal, but they didn't do the shark fishing community any favors either 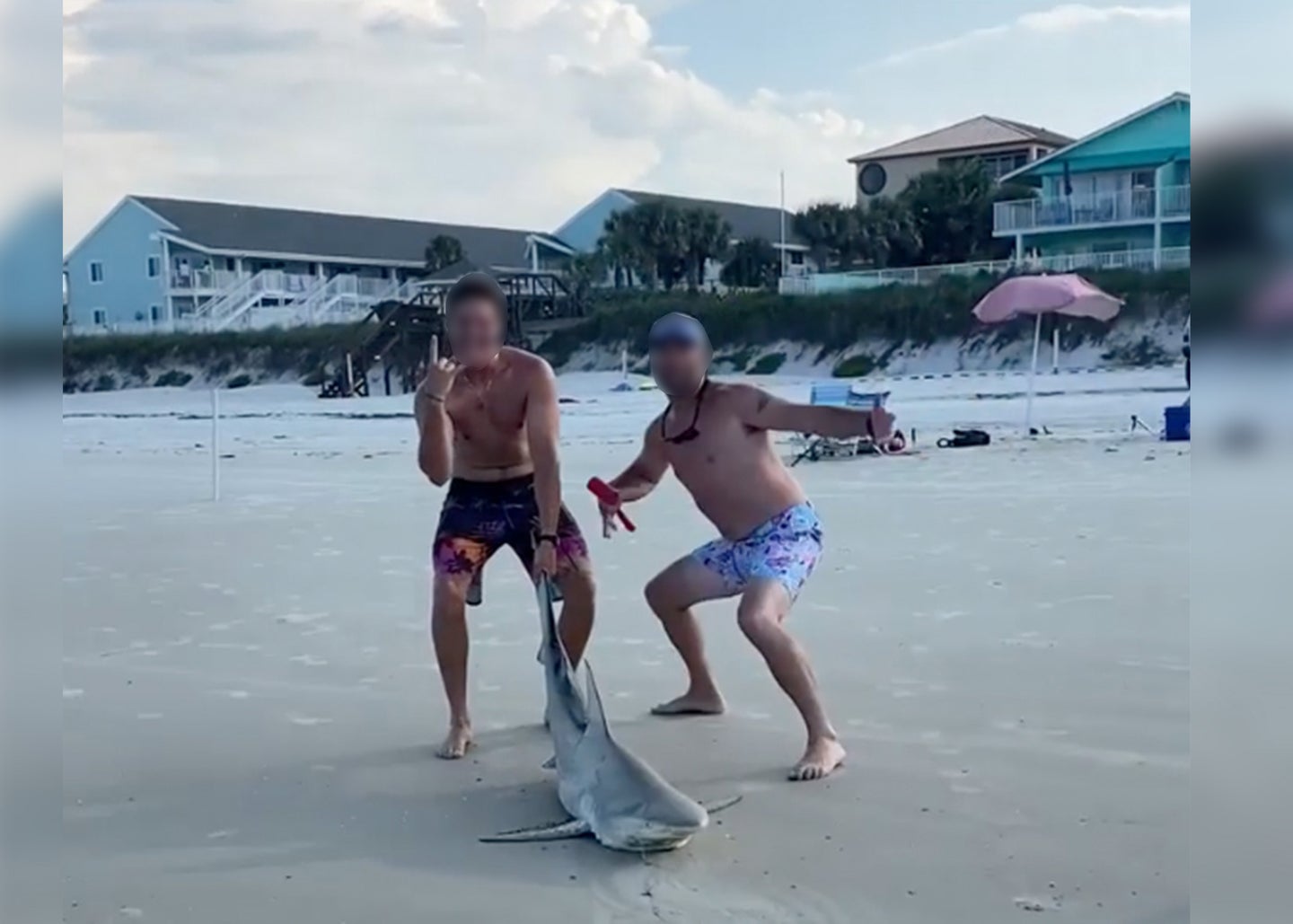 The two young men didn't ask to be photographed, but they seemed to enjoy the photo op. Mariana Sabogal / Facebook
SHARE

Two weeks ago, we reported on the banning of land-based shark fishing from public beaches along the East Coast. These bans have become more commonplace in recent years as the sport has garnered more attention from the non-fishing public. As our Fishing Editor Joe Cermele explained, shark fishing from the beach was once the domain of a handful of adrenaline junkies who mostly kept to themselves and maintained a strong conservation ethic.

“Fast forward to 2022, and land-based shark fishing has become one of the most overblown, ego-driven gong shows in fishing,” Cermele wrote. “All this commotion is destined to destroy the sport.”

Which brings us to the commotion that took place on Florida’s Smyrna Beach last Friday, when Mariana Sabogal filmed two young men dragging a blacktip shark across the public beach and stabbing it with a knife. Sabogal, who calls herself a shark lover, shared the video on social media that evening.

The video begins with two shirtless guys posing with the shark before Sabogal asks them to put it back in the water.

“You put it back,” one of the men replies sarcastically.

The two then proceed to drag the blacktip across the beach to their hang-out spot, where one of them pulls out a knife and stabs the shark in the head. Sabogal keeps asking them to please stop, but the other angler informs her that they aren’t doing anything illegal.

“Ma’am, you can look up FWC regulations,” he says. “It’s a legal harvest and there’s nothing you can do about it.”

The man was right, and a statement that the Florida Fish and Wildlife Commission emailed to Orlando’s WESH-2 News confirms that the two didn’t break any laws that day.

“It is a common practice for anglers to euthanize sharks after landing for ethical and safety concerns,” FWC explained. “The video is not currently under investigation as no violation of state law regarding the method of harvest occurred.”

While most commenters on Sabogal’s Facebook post were incensed by the video, a few of them also defended the two men’s actions.

At the end of the day, if you’re a shore-based angler who has ever had the privilege of casting a line from the beach, you should know that this scenario is bad for the shark fishing community—which is already under attack thanks to a growing handful of influencers and Youtubers who are more into posing with fish than treating them with respect.

How to Dispatch a Shark on the Beach

While the young man in Sabogal’s video did a poor job of showing how to properly kill a shark, he did get one thing right. Most shark anglers recommend that the quickest and most humane way to dispatch a shark is to stab it in the brain with a sharp knife. A lot of boat-based anglers carry a small pistol or shotgun onboard for this reason, but either way, shooting or stabbing a shark in its brain can be a challenge.

If you’re killing a shark that you caught from a public beach, discretion is key. No, you don’t have to hide what you’re doing if you’re playing by the rules, but you don’t need to flaunt it either. A couple options would be to fish for sharks in a less crowded area, or at a time when the beach isn’t full of tourists. Ask any real shark fisherman and he’ll tell you the bite is better at night anyway.

If, for some reason, you must kill a shark on a crowded beach in broad daylight, a little common sense goes a long way. Consider having your buddy hold the shark’s tail (with a rope, if need be) and brain it right at the water’s edge with your back to the crowd. It makes for a lot less commotion on the beach.

Like it or not, every one of us becomes an ambassador for the hunting and angling community every time we step into the woods or onto the beach. There’s no shortage of cameras out there, and there’s an endless line of people who would love to see our favorite pastimes outlawed for good.