A Florida angler that caught an odd-looking fish he couldn’t identify is lucky he wasn’t poisoned or shocked by his... 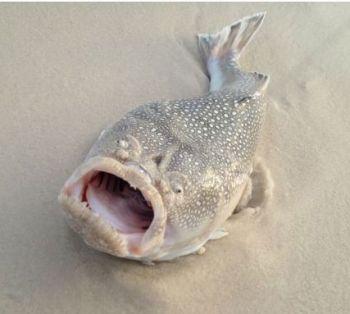 A Florida angler that caught an odd-looking fish he couldn’t identify is lucky he wasn’t poisoned or shocked by his catch.

Steve Harrison landed the freak fish while surf-fishing Grayton Beach State Park in Santa Rosa Beach, Florida. Unsure of what the creature was, the LSU AgCenter professor posted a picture of the fish on LouisianaSportsman.com asking if anyone could identify it. The thousands of replies varied from the humorous (it’s a mother-in-law fish) to serious guesses. The first person to correctly identify the species however was Capt. Tommy Pellegrin, with Custom Charters in Houma. He said the fish was a stargazer. This was verified by Louisiana Department of Wildlife and Fisheries Finfish Program manager Jason Adriance. He wrote, “It’s definitely a stargazer. They’re a couple of varieties it could be, but being it was in Florida, it’s tough to tell.”

Adriance went onto explain that the species are found in the Gulf of Mexico, inshore out to depths of 230 feet.

“It prefers sandy, silty, rubble-type bottoms, so I’m guessing it’s not as prevalent in the soft mud we have, but you might find it more so in a coarser grained sediment,” Adriance continued. “It will bury itself in the bottom and keep its eye stalks up above and ambush prey, waiting for something to get close enough and then sucking it in whole.”

Adriance added that the species has venomous spikes and is capable of electric shock when bothered.

“There’s a smooth area on the head where the electric organs are,” he said. “I think they can generate a max of about 50 volts, used mostly for defense.”

This realization led Harrison to write, “I knew there was a reason not to reach in his mouth for my jig.”