Farmpond Fishing for Bluegills with Crickets and Cane Poles 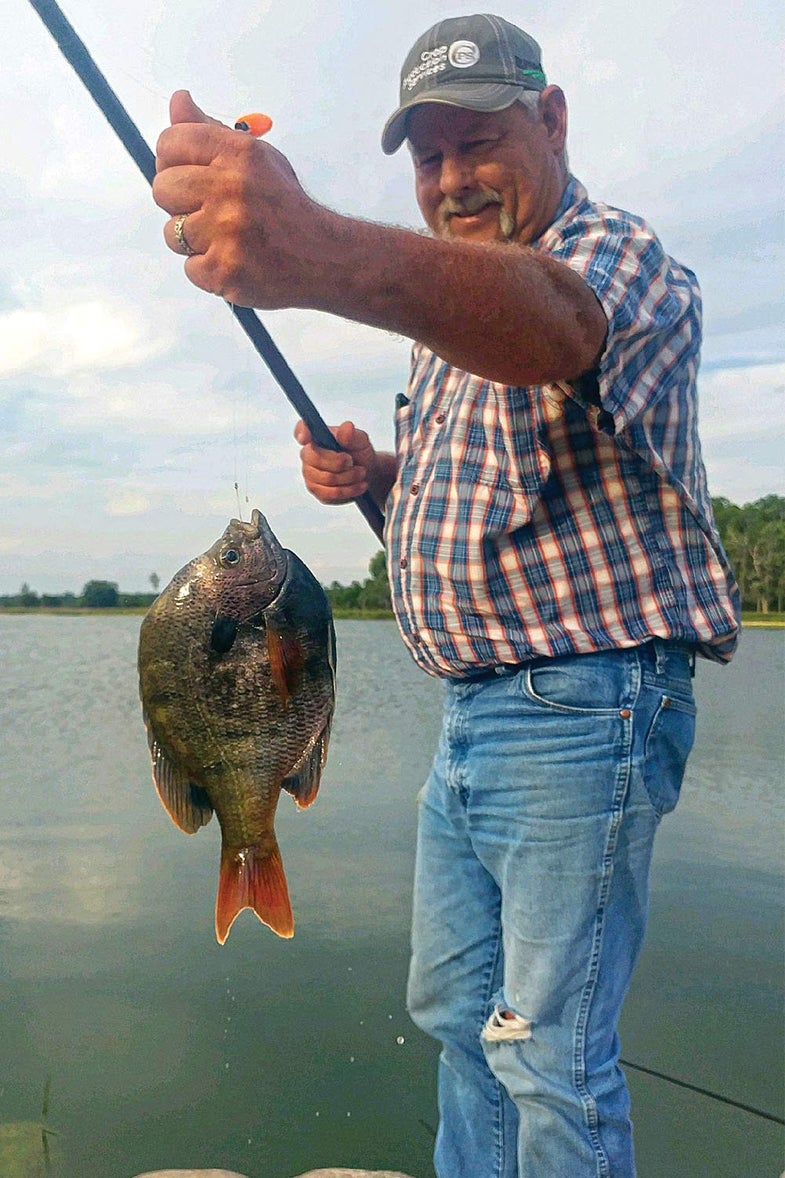 When Wayne Shelby isn’t guiding for turkeys, hogs, or gators on his employer’s ranch, he’s fattening cattle and fixing fences. For him, finding spare time is like finding a pot o’ gold. But I asked him if he’d like to go fishing one evening anyway.

“I think I’ll go,” he said as he wiped his sweaty brow with a forearm and glanced at the baitcaster in my hand. “If we can fish my way.”

“Sure,” I said, surprised and unsure whether it was a joke. “And what way is that?”

“Let me run and get the crickets.”

A few minutes later, Shelby reappeared with a pot full of crickets, a cooler of beer, and cane poles lying in the back of his flatbed. “Ever caught a pounder bluegill?” he asked.

I climbed into Shelby’s pickup for a short ride to a farm pond. He untwisted the line from the 12-foot poles and handed me one before deftly threading a hook down through a cricket’s collar and out the skin of its belly. Then he dropped the writhing insect underwater until it hovered a couple of feet below a float. Before either of us could crack a brew, Wayne’s bobber plowed water and vanished. A bent-pole battle ensued. Soon a panfish made a huge man’s hand appear small. It weighed 17 ounces. My jaw dropped as Shelby’s formed a monstrous, kid-like grin.

We caught about 50 fish on that Florida pond’s bank in two hours. Several topped a pound.

If you haven’t fished for ’gills with cane poles in ages, you’ve likely forgotten what you’re missing. It actually lends an advantage over spin gear for bream because the bait can be dropped with precision into tight spots, and fish lifted out, without snagging or disturbing nearby waters. It’s also incredibly fun. A 1-pound bluegill is a trophy in anyone’s book.

Fertile waters are required for giants anytime, but the setup is different for fall bluegills. While Shelby fishes a little deeper and on slightly heavier line and hooks during spring and summer, in October he goes ultra-light.

“I have no problems catching them in the fall,” says Shelby. “Usually they’re in shallower water that the sun warms up fastest, so I just use lighter tackle and fish right up against the reeds.” Wayne prefers a 12-foot Crappie Stalker telescoping rod, to which he adds a 200-size reel. He uses 20 feet of 6-pound-test Berkley Big Game monofilament tied to a black No. 4 Mustad hook. In fall, he rarely uses a split shot like he does in summer to keep the cricket deep.

Rigged with a small slip cork and a rubber band tied as a stopper, cane-pole fishermen can drop the bait on a dime with barely a splash. Trap your own crickets or buy them from a pet store or bait shop. Keep them kicking indefinitely by tossing a raw potato wedge in the trap; they’ll get food and water from it. Freshwater shrimp are also dynamite for fall bluegills. Finally, add beer to ice and a buddy to help clean fish, and you’re doing it Wayne’s way.

But you don’t need to get fancy. You can buy or cut a stalk of dried bamboo anywhere from 8 to 12 feet in length. When using a basic cane pole without guides, tie the line to the pole’s tip so that a little more than the rod’s length is left for attaching the hook. Leave enough tag end so that it can be wrapped around the pole and tied near the handle to provide backbone for larger fish. For fall fishing, go with 6- to 10-pound-test. Use electrical tape to secure both knots around the pole and prevent the line from unwrapping.

While plastic bobbers are cheap and easy, nothing beats watching an actual cork float quiver atop still water. Rig it in slip fashion so your bait’s depth can easily be adjusted. Finally, watch the cork. If it bobs violently then goes still, you’ve got a ’gill on.