The Bronco is the most capable 4x4 ever built, but does it make sense for hunters and anglers? 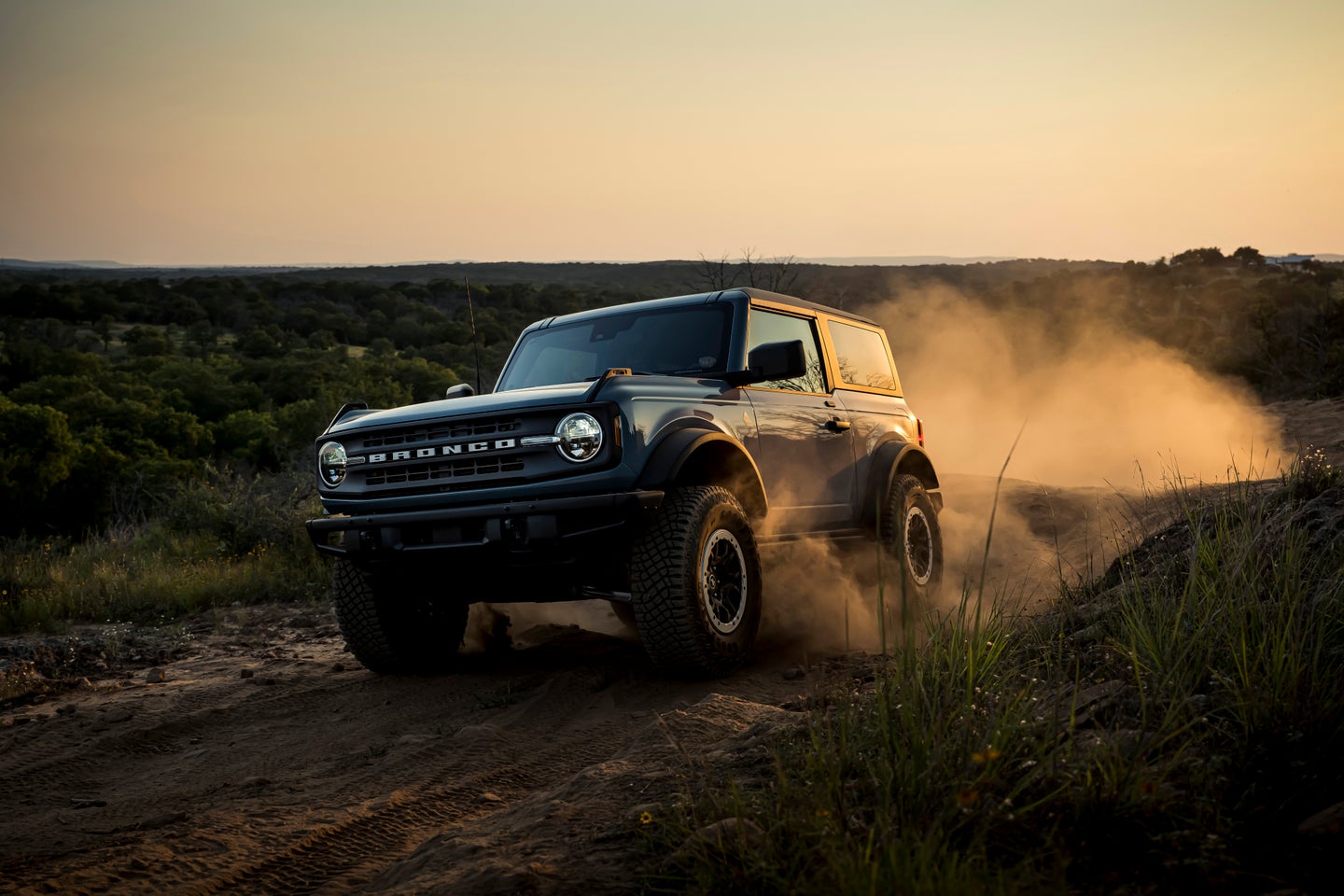 The Bronco gets put to the test in the Texas desert. James Lipman / Ford
SHARE

The new Ford Bronco is now the most capable 4×4 you can buy for both off-road, and on the highway. But while that proficiency will appeal to sportsmen and women who need to access challenging terrain, there are practical limitations created by its abilities. I’ll briefly explain why the Bronco is so superlative, but will really focus on the question of whether or not hunters and anglers will be able to fit this new Ford into their lives. Going hunting or fishing often involves moving a lot of gear, some dogs, friends, and maybe even a boat or ATV into the backcountry. How well will the new Bronco perform those tasks?

As long as I can remember, the Jeep Wrangler has held the title of most capable 4×4. But it took a relatively old school approach, with a live front axle that maximized articulation at the expense of ride quality and on-road handling. Without any real competition, Jeep has been able to get away without doing much innovation in recent decades. Its engines pass current emissions regulations, and you can plug your phone into the infotainment system, but otherwise, the Wrangler you can buy today doesn’t feel a whole lot different from one you drove two decades ago.

The Bronco comes at the Wrangler head-on, with modern technologies and approaches, and the full-weight of Ford’s enormous budget and enthusiast-based corporate culture behind it. Not only does its independent front suspension deliver smoother, more predictable on-road handling, along with the ability to tackle high-speed off-road terrain like you’ll find in Baja, but with more wheel travel and more articulation than the Wrangler, the Bronco is actually better at rock crawling, too.

That’s really saying something. Until now, those two types of terrain dictated entirely different vehicles. A Ford Raptor or Dodge Ram TRX might be fun in the desert, but their long wheelbases and wide tracks ruled them out on tight trails or big rocks. The short wheelbase and slim dimensions of the Wrangler could get through or over pretty much anything, but the weight of that big front axle could only move up and down so fast, limiting speeds when the trail opened up.

Option the $4,995 Sasquatch package on the Bronco—available on any trim level—and you get 35-inch mud terrains, front and rear axle lockers, extremely low gears, and triple-bypass, remote-reservoir suspension. And all that endows the Ford not only with better angles and more articulation than any Wrangler, but also an ability to land jumps and fly through desert terrain that approaches that of the Raptor.

The Bronco Cuts No Corners

The most impressive thing about the Bronco though isn’t its outright capability, it’s the ease with which it makes that capability accessible. When designing the truck, Ford started with a clean sheet, then took an extremely thorough approach, cutting no corners on the way to developing the most capable 4×4 ever. What that means to you and me is that a completely stock Bronco that just rolled off the showroom floor will outperform the kinds of trucks we had to create using aftermarket components in the past. Fitting taller suspension and larger tires has always made modified trucks sketchy on pavement and intimidating to drive off-road. But even in its most capable form—Sasquatch—the Bronco still rides and handles like the totally stock vehicle it is.

And Ford also went out of its way to make accessing the Bronco’s most extreme capabilities as easy, and seamless as possible. A row of switches on top of the dash controls features like the locking axle diffs and disconnecting sway bars. A rotary dial on the center console controls the four-wheel drive transfer case and accesses the Bronco’s electronic driving modes. Spin that dial to correspond with the type of challenges you’re facing—say, mud and ruts—and the Bronco will automatically engage four-wheel drive, the diffs, and alter its electronic traction solutions to suit. Need something more? Once you’re in one of those off-road modes, simply pushing the button on the dash can lock or unlock the diffs at any speed or disconnect or reconnect the sway bars at any degree of articulation.

And all that together means that drivers of any experience level will be able to use these features. A teenager with a freshly-printed driver’s license will have no problem parallel parking the Bronco on a city street. Someone who has never driven off-road before will be able to safely traverse steep, off-camber obstacles. No matter who’s driving, they’ll feel confident on highways, trails, bad weather, you name it. And that could be just enough to allow you to get farther into the woods than anyone else, accessing a remote hunting or fishing spot your competition can’t get to otherwise.

The Best of the Ford Bronco

Here are the best attributes of the Bronco after putting it to the test.

Where the Ford Bronco Missed the Mark

While the Bronco is an exceptional vehicle,Ford left out a few desirables most hunters and anglers will want in a truck.

Is the Bronco the Right Truck for You?

I drive off-road every day and go even further in pursuit of good hunting and fishing opportunities. But I’m not planning to buy a Bronco. Why? It’s just not big enough to fit my three large dogs, or all the stuff I usually want to take with me. And getting all those mutts and coolers and camping gear into the field is more important to me than getting a little further without all that.

You’ll need to consider the same calculation, and not just on space. The four-door model’s payload starts at 1,452 pounds and can drop as low as 1,032 pounds with the addition of off-road accessories from the options list. The two door’s payload ranges from 1,254 pounds, all the way down to 863 pounds. Because payload is the total weight a vehicle can carry, and must include the driver and passengers, fuel, and anything bolted to the vehicle, as well as the stuff it carries, you may quickly find yourself in excess of those numbers. And exceeding payload ratings is not only dangerous, it could damage your vehicle during normal driving, too.

Running some math demonstrates how quickly a hunter could exceed the Bronco’s payload. Let’s say two humans total 350 pounds, 17 gallons of gas is 104 pounds, a case of beer is 34 pounds, and a Yeti 210 weighs 62 pounds empty, for a total of 550 pounds. We’re not even taking into account camping gear and a bunch of other stuff here, and in the lowest capacity two-door Bronco, that only leaves 313 pounds available—not even enough to safely haul a quartered elk.

How to Configure a Bronco

All Broncos are four-wheel drive, and include a low range transfer case. So, the only option you need to add to max out off-road capability is the Sasquatch package. I’d start with a base $34,995 four-door, add Sasquatch, for a total of $39,995.

From the Ford Performance catalog, I’d add the rock rails ($595) to protect the vulnerable door sill area, the table for the side-opening tailgate ($209) to give me a place to cook, and the bumper with matching Warn [pricing is not available yet], and recovery kit ($330) to add protection from animal strikes and the ability to self-recover.

The aftermarket gives us the ability to address the Bronco’s lack of storage space, by fitting a Pakmule hitch rack ($795). If you want the ability to sleep on top of the truck (you won’t fit in it), the GoFastCampers Superlite (starting at $1,200) is the only hardshell rooftop tent you’ll be able to safely run on the Bronco. If, like me, you live in the Rocky Mountains, you’ll also want some off-road lights so you can spot animals. At $575, a pair of ARB Solis 9-inch rounds will add considerably more light for less money than anything in Ford’s own catalog. And absolutely everyone should carry a set of Maxtrax ($300) in this thing; they’re the safest, easiest way to get unstuck.

That’s everything you need to full take advantage of the most capable 4×4 to ever roll off a production line.