The Hatsan FlashPup: a compact bullpup that punches above its weight class 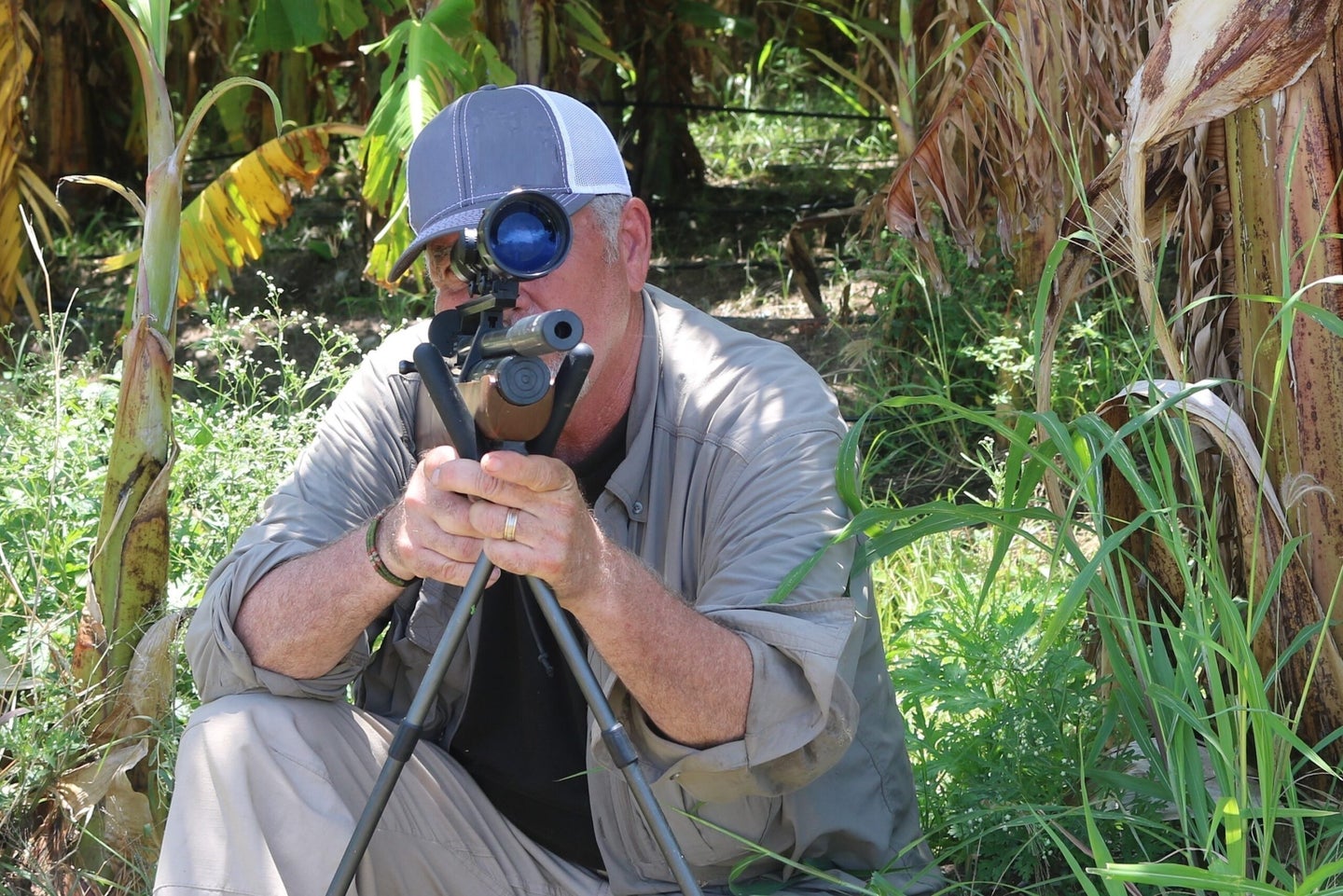 Over the last few years, I’ve seen more PCP bullpup airguns being brought to market. Just about every manufacturer has thrown their hats in the rings, and there are several nice models to be found across a wide range of price points. In this review, we’re going to look at the Hatsan FlashPup QE, which is a design with a lot to offer. This airgun is feature-rich along with being wallet-friendly, a combination not always easy to find.

Hatsan has several bullpups in their product lineup, ranging from their powerful .50 caliber big bore to their entry point for standard caliber guns, the FlashPup. This compact airgun is available in .177, .22, and .25 calibers, and dressed in either a synthetic thumbhole stock or a Turkish walnut hardwood stock with a pistol grip. While the stocks are of a slightly different design, the other components of the gun are interchangeable. The barrel is fully shrouded utilizing Hatsan’s Quiet Energy (QE) integrated sound suppression unit, which effectively reduces this bullpup’s sound signature. The Hatsan FlashPup QE design utilizes a combination 11mm/Picatinny rail for mounting a scope, which provides a good sight alignment with low or medium profile mounts. This hybrid rail allows just about any mounts to be used and is another one of those small design features that I appreciate.

Both the wood and synthetic versions have a forestock Picatinny mount, and the synthetic also incorporates two additional rails on the left and right side of the forestock for mounting additional accessories.

The Hatsan FlashPup QE is cycled using a side lever cocking action, with a large and tactile cocking handle. The action is smooth, allowing for rapid cycling of the side lever that auto-indexes the rotary magazine, which holds 14, 12, and 10 shots for the .177, .22, and .25 caliber guns, respectively. Though the side lever has been moved back behind the trigger hand, it is positioned so that it is easy to reach without dismounting the gun from the shoulder.

The standard package for this gun includes two magazines, which are the proven Hatsan design implemented in several of their hunting air rifles. It is fast and easy to load, the clear cover is rotated against a light spring resistance where the initial pellet is fed skirt first, then flipped over, and the remaining pellets are fed headfirst. This magazine is rugged and reliable, and additional magazines are reasonably priced.

The 165-cc aluminum air reservoir tube sits under the barrel and is filled with a proprietary Hatsan fill probe inserted into a port located at the distal end of the reservoir. The reservoir fills to a pressure of 2800 PSI and generates 35, 30, and 25 shots per fill, depending on caliber. Considering this compact bullpup generates up to 29 ft-lb for the .177, 38 ft-lb for the .22, and 40 ft-lb in the .25, this demonstrates an optimized management of the onboard air supply. There is a pressure gauge mounted just in front of, and slightly below the magazine well that allows the reservoir pressure to be monitored while shooting.

The trigger in a bullpup design can be tricky to implement because of the required linkages from the rear-mounted receiver to the repositioned trigger much further forward. The FlashPup QE uses Hatsan’s Quattro Trigger system, which I find crisp with a moderately light pull out of the box, but the two-stage adjustable design gives the shooter the latitude to set it up to their specific preferences. The safety is positioned inside the trigger guard, and with a little practice is easy to flick off when preparing to shoot.

The overall length of this pup is 32 inches with a 19.4 inches barrel, and it weighs 6.1 pounds in wood and 7 pounds in the synthetic stock. Even though it is quite light, like a lot of bullpups, it pulls that weight into the shooter’s center of gravity, and I find it a very nice offhand shooter.

Before taking the two Hatsan FlashPups I have on loan out to the range, I will mention that I’ve used previous versions of this gun on some very challenging hunts. A while back, I was invited down to Puerto Rico with a group of writers to get a firsthand look at the ecological damage experienced on the island due to an infestation of non-indigenous green iguanas and participate in a cull on a couple of especially hard-hit farms. The culls took place in the plantation groves and through the tropical woodlands surrounding the farms, where the need for a compact shooting rig called out to me. When it came time to select a gun for the hunt, I immediately gravitated to the FlashPups on the gun rack. For about a week, I used the .22 and .25 FlashPups in the field for non stop shooting in humid, muddy conditions. So, a spoiler alert, I went into this review having already started my field testing.

On the range, handling characteristics were excellent. The Hatsan FlashPup QE is a compact and lightweight design that is ergonomically laid out. There is a functional cheek piece cover over the receiver that buffers your face from the metal and provides a consistent hold and good line of sight. As mentioned previously, the cocking action is smooth, the trigger light and crisp, and the balance is very good. I find this a very shootable bullpup, and though both the synthetic and wood stocks are quite similar, I found the wood stock suited me a little better.

Shooting over the chronograph demonstrated a good shot-to-shot consistency across a 30-shot string generated from a 2800 psi fill. I sent 30 consecutive shots downrange using JSB Exact 25.39 gr Diabolo pellets. The average velocity was 770 fps, with a high of 810 fps, and a low of 728 fps and 82 fps spread. Using the medium weight air rifle pellets the FlashPup was producing a peak energy level of 36 ft-lb. This is solid performance for a gun intended to be used for small game air rifle hunting.

The accuracy was also very good with this set up. I was shooting groups using a tabletop bipod affixed to the FlashPup via the Picatinny rail under the forestock. At 50 yards, I kept all 30 pellets in a group slightly larger than a quarter. There was no appreciable shift in the point of impact between the first and thirtieth shots. It’s good to know that when you head out for a weekend in the woods hunting squirrels, you have enough air to bag a limit or two.

What the Hatsan FlashPup Does Best

This Hatsan air rifle offers excellent value for the price. You get an accurate and capable small-game hunting rifle for well under $500. It offers a good shot count at around 30 consistent shots per fill for the 25 caliber. It’s also ergonomic and compact thanks to the bullpup design.

What the Hatsan FlashPup Does Worst

I think that overall, Hatsan got things right with this bullpup. However, I have some personal preferences that would make the gun a little better for me. First, while they did a very good job on the side lever action, I would have liked to see it moved forward a little bit further. Having said this, I did not find that its location hindered fast cycling and follow-up shots when needed. Next, I prefer the gun to be connected for charging through a universal quick release fitting rather than a proprietary fill probe. However, unless you have multiple guns, this is either a minor or non-issue, and even if you do have several PCP air rifles with different probes, it only requires that you make sure to keep the right probe with your air source. I have a box containing the most common probes from several manufacturers that stay tucked into my CF tank bag.

But to be fair, these are more personal preferences than actual deficiencies, and I believe the Hatsan FlashPup shines in the areas that count for a gun destined for heavy field use. It is accurate, powerful, ergonomic, provides a good shot count, and is a pleasure to carry and to shoot. This airgun is loaded with nuanced features that enhance its functionality, such as a patented antiknock system to prevent gas wastage when the rifle is knocked or bounced. And a major advantage in my opinion is the price point. This gun offers the performance of a more expensive gun at a modest price. I think that in .22 or .25 (I prefer .25) it is an outstanding small game gun. Having used the two larger calibers on several hunts — I can say without reservation — this is an air rifle built for the field.