This heavy-hitting magnum PCP airgun is built to hunt 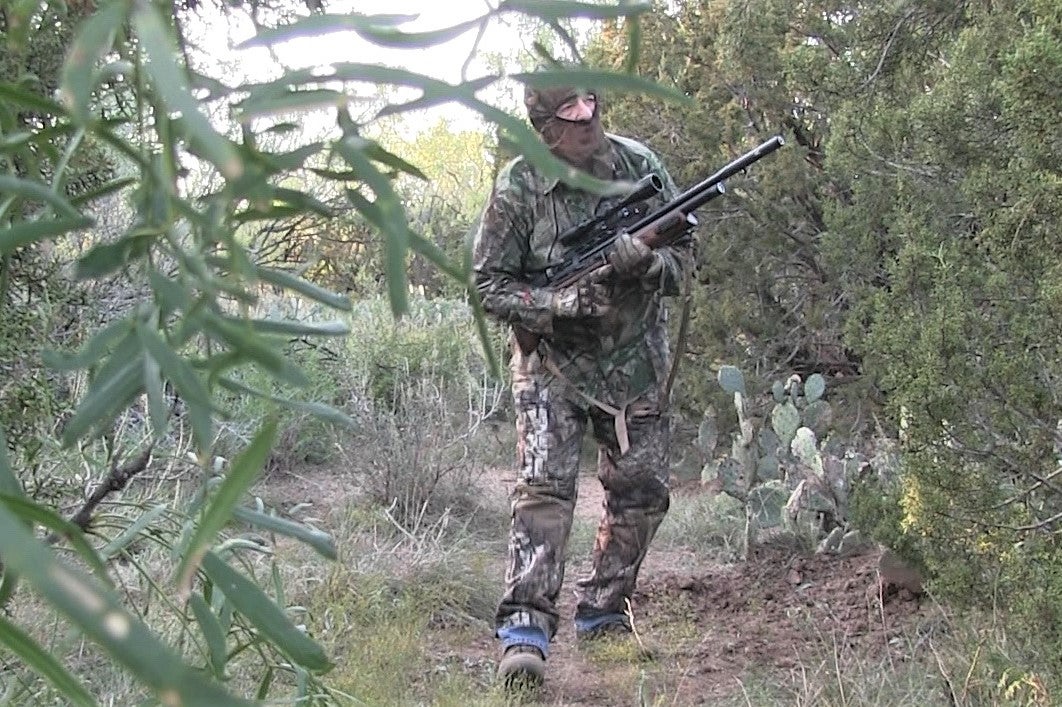 the BullBoss makes a great hunting airgun for small game that can step up for larger quarry if you need it to. Jim Chapman
SHARE

The Hatsan BullBoss is an interesting precharged pneumatic airgun that is configured as a bullpup. It is accurate, powerful, ergonomic, and we’ll take a closer look at the specifications and performance later. What I have found particularly interesting is how the Hatsan BullBoss fits into my hunting air rifle lineup. Even though it is a bullpup design, it is not an ultracompact gun. Actually, it is a handful, weighing in at 8.8 pounds with an overall length of 36.8 inches. In many ways, it shoots more like a carbine than a bullpup, and I mean this in a positive way. But let’s review the gun and come back to my opinions — based on a lot of field time with it — later.

The Hatsan BullBoss is available in three calibers, .177, .22, and .25. However, my personal opinion is that if I am going to carry a hunting gun this big and powerful, it’s going to be at least a .22, or better yet, .25 caliber. The synthetic bullpup stock is a thumbhole configuration with an adjustable comb that allows the gun to be set up to suit most shooters. The pistol grip is ergonomic and allows easy reach to the trigger and safety control located inside the trigger guard, while providing a stable and secure grip. For those that prefer a wood stock, this option is available as well.

The side-lever cocking mechanism utilizes a substantial knurled handle that provides a secure hold while cycling the gun. The cocking action is smooth, and auto-indexes the nine shot (10 in the .22) rotary magazine. I have found that the magazines feed reliably under heavy use and rough conditions, are easy to load, and extra magazines are reasonably priced. The safety on this bullpup is automatically deployed when the gun is cycled, not one of my favorite features. However, it is mitigated by the accessible safety control.

The trigger on the Hatsan BullBoss is designed for field work, and it does a very good job in this capacity. It is two-stage and fully adjustable for both travel and load. My .25 caliber BullBoss is primarily used as a small game and varmint gun, with the trigger set to break at just a tad over 3 pounds. This is a personal preference when I’ll be shooting in colder climates and likely to be wearing gloves.

Another feature of this airgun is the mounting options for scopes and accessories. Starting with the scope, Hatsan USA has designed a rail that can accept either an 11 mm (airgun/rimfire style) or 22 mm (Picatinny type) scope mount. There is also a Picatinny rail on the forestock that can be used to mount a light, sling swivel, bipod, etc. I’ve used it to mount a high-intensity red light for predator hunting, and the setup has worked like a charm for me. The barrel is a 23-inch button-rifled German steel construction, and is in my opinion, on a level with more expensive premium OEM components. The barrel sits over a 230cc removable air cylinder, allowing an extra tube to be carried in your pack when air rifle hunting in a target-rich environment. There is a pressure gauge mounted at the distal end of the reservoir for monitoring air usage.

The BullBoss has a very effective integrated shroud and suppressor which Hatsan calls the Quiet Energy (QE) sound suppression system. This is one of the better sound suppression rigs to be found on a production gun, especially considering the price point of this gun. I’ve opened the suppressor up for a closer look and found that the internals consist of three cloth-wrapped Dacron baffles.

I enjoy using this PCP airgun on the range, finding it comfortable to shoot off a rest, bipod, or when practicing offhand shooting. The Hatsan BullBoss is not regulated, but the well-balanced valve provides good shot-to-shot consistency, delivering about 28 full power shots on a 200 BAR fill. Shooting over the chronograph, the gun generates an average velocity of around 921 ft-lb with the 24.7 gr Hatsan Vortex Strike pellets, which yields a power output of approximately 46 ft-lb. The accuracy is quite good, and I can shoot ¾ inch groups at 50 yards all day long with this rig.

I mentioned that the ergonomics were excellent, and what I like is that even though the gun is heavy, the weight is loaded towards the rear of the gun. The result is that it pulls the gun into your center of gravity when shooting offhand and offers a great deal of stability. The adjustable cheekpiece is comfortable and provides a consistent line of sight when paired with medium profile rings.

Testing the Hatsan BullBoss in the Field

Over the last few years, I’ve done a fair bit of hunting with the .25 caliber Hatsan BullBoss, using it on everything from the usual small game, such as squirrels and rabbits, up to predators. As a matter of fact, I have taken even larger game with it. My preference for using a .25 or .30 caliber gun to hunt small game is, that if an opportunistic shot at larger game presents, I have more confidence in taking the shot with a larger caliber and high-powered air rifle. And that is exactly what happened on a hunt in Texas a while back.

I was out with my wood stocked BullBoss in .25 caliber on a rabbit hunt one morning, working the thickets along a ranch road, when I heard grunts and squeals up ahead. I moved towards the commotion, keeping to the brush along the side of the road, and eventually came across a sounder of pigs by a deer feeder. There were a couple decent-sized porkers, and a few in the 40- to 60-pound class running around. I had the wind in my favor and good cover that let me close to about 40 yards.

I decided to limit my shot to a smaller hog and picked out a little spotted boar that weighed about 50 pounds. Taking a knee and shouldering the gun, everything felt good. The Hatsan BullBoss was very stable while resting on my knee, and lining the crosshairs on the pig’s head, I squeezed the trigger and dropped the pellet down his ear. The pig dropped on the spot as though he’d been pole axed. After months of shooting this rifle on the range and in the field, I had complete confidence in my shot placement. The QE sound suppression system keeps the report low, and I remember thinking that the pellet impact was louder than the discharge.

Without taking the rifle off my shoulder, I cycled another pellet, and seeing the spotted pig was out for the count, I swung around and put a second pellet in the ear of a smaller pig that had stopped to look around as the rest moved away. My rabbit hunt turned into an ice chest full of tender pork, and the BullBoss performed flawlessly.

I often use bullpups when hunting more built-up industrial, agricultural, or suburban areas where there is a need to maintain some level of stealth. They also work well for those pest control shoots where there is a need to jump in and out of vehicles while moving around a property. I also like them at night when lights need to be mounted on the gun. However, for shooting in the wide-open spaces, my preference gravitates toward carbine length guns. But depending on the caliber, projectile specifications, and valving of the gun, a shorter barrel can negatively impact the velocity.

Where the BullBoss stands out for me is, with its larger size (compared to other bullpups), it fits me much more like a carbine and combines the advantages of a bullpup and a carbine in an accurate, powerful, shootable, and reliable field gun. Several of these advantages came into play the day I took these hogs. My confidence level was high that inside of 50 yards, I could drop the pellet right down a pig’s ear, I knew the gun was powerful enough to do its job if I did mine, and the stock’s ergonomics allowed precision shooting precision while rested on my knee. And in addition to its efficacy, the gun was so quiet that some of the pigs stood around a minute too long (for them) after the first shot.

What the BullBoss Does Worst

There is not much that needs to be change with the Hatsan BullBoss, in my opinion, perhaps reducing the weight a bit, but I don’t really find this much of an issue. I’m not a big fan of the automatic deployment of the safety when the gun is cocked. It adds a few seconds when cycling the gun for a quick follow up. Though with the safety control positioned inside of the trigger guard, most shooters can train themselves to flick it off quickly when they need to.

I think the Hatsan BullBoss makes a great hunting airgun for small game that can step up for larger quarry if you need it to. While heavier than many Bullpups, it carries well and provides a very stable shooting platform. It is intrinsically accurate, powerful, easy to shoot, and very quiet. If looking for an ultracompact, lightweight bullpup, this is probably not the best option for you. However, if you’re looking for the best air rifle— a solid hunting PCP air rifle packed with features that combine full-size rifle performance in a relatively compact package — this gun is definitely worth a look. And I saved one of the best points for last; it is one of the most attractively priced products in its class.