The Hatsan Invader is a semi-automatic PCP air rifle designed for hunting. Our expert put it to the test 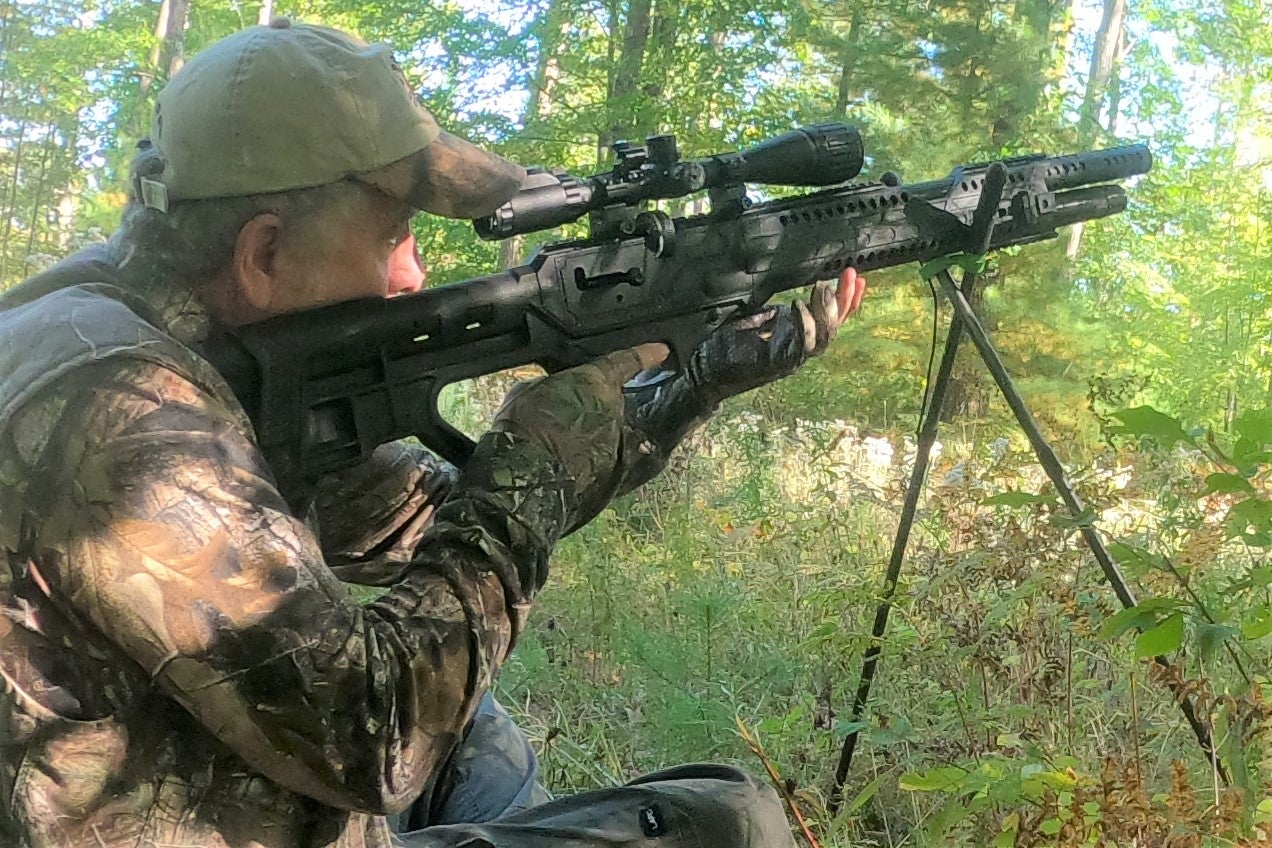 The author squirrel hunting with the Invader on opening day. Jim Chapman
SHARE

There have been numerous advances in air gun technology over the last couple decades, but one of the more elusive goals has been the development of a semi-automatic air rifle that is rugged, reliable, accurate, and powerful. Enter the Hatsan Invader, a semi-auto that achieves those goals and won’t break the bank. I’ve been using this small-game hunting airgun for a few months now, and here is how it performed.

Hatsan makes some of the best air rifles that come at reasonable prices. So, it’s not surprising that their semi-auto fixes many of the issues of previous attempts at semi automatic hunting air guns while keeping the price under $600.

The Hatsan Invader rifle is a PCP air rifle that utilizes one of the slickest semi-automatic actions I’ve seen. The stock is a tough polymer thumbhole design, with an adjustable cheekpiece, a removable carry handle with integral scope mount, and several Picatinny rails beneath and on the sides of the forestock for mounting a bipod, laser, light, or other accessories. An integrated sling mount that provides a secure means of carry. The barrel and 255cc removable air cylinder are housed within the synthetic forestock. The removable cylinder is capped with a dust cover that protects this Hatsan air rifle’s proprietary fill port and has an integral pressure gauge.

There Invader uses the Hatsan Quattro trigger system, which is a two-stage adjustable design that provides a great deal of latitude in set up and offers a light, crisp, and tactile trigger pull. The gun is brought into battery with a bolt that is retracted and positioned into a slot that holds the action open for safe loading and removal of the 12-shot magazine. The gun comes with two magazines, and there’s a spare magazine slot in the stock.

To truly appreciate the Hatsan’s semi-auto design, you have to know a little of the history of semi-automatic air rifles. There have been several attempts at semi-auto hunting air guns, from blow-back designs to guns using an electro-mechanical actuator to cycle the action. In my experience, these guns suffered from reliability issues. The electro-mechanical designs also had a fatal flaw from a hunter’s perspective: a lag between the trigger pull and the gun’s discharge. This lag lengthened as the ambient temperature dropped. All the early blowback designs I tried were extremely pellet sensitive — they would only digest one type of pellet, and even then, seemed to consistently fail at the worst possible moment.

But recently, there has been a new batch of semi-automatic PCP (pre-charged pneumatic) air rifles coming to market. These air rifles incorporate a cylinder of compressed air that you fill via a compressor or a scuba tank. PCP air rifles seem to circumvent the historical shortcomings of semi-auto air rifles, and are powerful, accurate, and reliable. Included in that group is the Hatsan Invader.

The Invader has a piston and spring mechanism that uses air expelled at the muzzle when firing to move the piston and attached rod forward. The rod moves a rack and pinion setup that cycles the bolt and loads a new pellet. To aid in resetting the hammer for the next shot, the valve allows a small amount of air to pass the valve pin when fired. This mechanism has proven both reliable and robust, which has not been the case with most of the semi-automatic designs I’ve tested in the past.

I removed the carry handle and mounted a Leapers 4-16x44mm scope on low-profile mounts (I like the scope to sit lower on the receiver on hunting air rifles), then headed to the range. After getting my shots on paper, I moved the target out to 50 yards to zero in and used my portable bench rest with the rifle held in a Bog Death Grip clamp attached to a tabletop bipod. I tried a couple different pellets and found that the 18.13 grain JSB Exact pellets, which I use for hunting, were the most accurate.

Shooting off the rest, the rifle handled well providing a comfortable hold, and the trigger was easy to operate. I started off with a 46-pellet string from a 3000 psi fill of the reservoir. As the accompanying photo shows, these shots grouped well, achieving a maximum velocity of 921 fps, an average velocity of 848 fps, and a minimum velocity of 761 fps, with a spread of 160 fps. This equates to a maximum power output of 34 ft-lbs and an average of 29 ft-lbs.

The rifle was powerful, but is it reliable? My earlier experiences with semi-auto PCP air rifles have been plagued by jams, misfeeds, and general failures, to a point where my confidence has been somewhat shaken. However, I fired a few hundred pellets through the Hatsan Invader with zero failures.

I took the Invader out for the opening of squirrel season to get a feel for its handling while hunting. The Invader is a fairly large gun, and the thumbhole stock and beefy fore-end shroud provide a good grip when stalking through the woods. The synthetic stock is not too heavy and wasn’t a burden to carry through the woods, looking for game. For longer treks, attaching a sling to the built-in sling swivels made carry very comfortable.

The gun came quickly to shoulder, and the controls were immediately accessible. The design allowed me to shoot well from many different positions: braced against a tree, kneeling, offhand, or with sticks. I never felt limited by the gun. In the heavy fall foliage, before the leaves came off the trees, I found having that second shot on tap was quite advantageous for follow-up shots, as well as addressing multiple targets. I bagged enough bushytails to put squirrel dumplings on the menu.

What the Hatsan Invader Does Best

While it’s not the most accurate air rifle, the Hatsan Invader is still an accurate hunting air rifle. I shot a rapid 30-shot, 50-yard group that was easily in the kill zone of any small game species. The stock ergonomics, trigger, valving, and barrel add up to a gun that has the accuracy to put the pellet where you want it, and do so with more than enough power to get the job done. Usually, one shot is all you need with the Invader, but if there’s a need for a fast second or even third shot, you’ll be able to take it immediately. Accuracy, power, reliability, rapid follow up shots, high shot count, good ergonomics, and all around shootability make the list of this rifle’s advantages.

What the Hatsan Invader Does Worst

Looks are subjective, and if you don’t like rifles with a tactical look, you will not like the Invader. It’s a bit bulky and is definitely long, but not so bulky and long to be a problem for the average sized shooter. Personally, I’m not a huge fan of proprietary fill probes or a safety inside the trigger guard. However, none of these minor points would prevent me from adding this rifle to my collection. The Invader is not a 100-yard benchrest competition rifle, but for a hunting gun it has a lot going for it.

Do You Need a Semi-Automatic Air Rifle?

One of the first questions I ask myself when considering a new gun is whether or not it’s a valid addition to my air rifle hunting armory. I’ve spent the last 30 years hunting with air guns that were either single shot or bolt-action, and done quite well with that technology. But even though my goal when air gun hunting is picking the right shot and putting my quarry down with one pellet, there have been times when an immediate follow up could have gotten game I’d missed, or delivered a second shot faster. While I am still happy to cycle the gun for each shot, there is nothing wrong with a semi-auto if you don’t give up accuracy, power, and reliability.

Final Thoughts on the Hatsan Invader

A key to picking out the right rifle is knowing what you like, what you intend to do with it, and how your options stack up. If you want a compact gun or a competition-ready target rifle, this is probably not the gun for you. However, even if this didn’t have a semi-automatic action, I’d have found the Hatsan Invader a well-handling and effective small game gun. Add in that semi-auto capability, and you have a unique gun that will serve you well in the field.