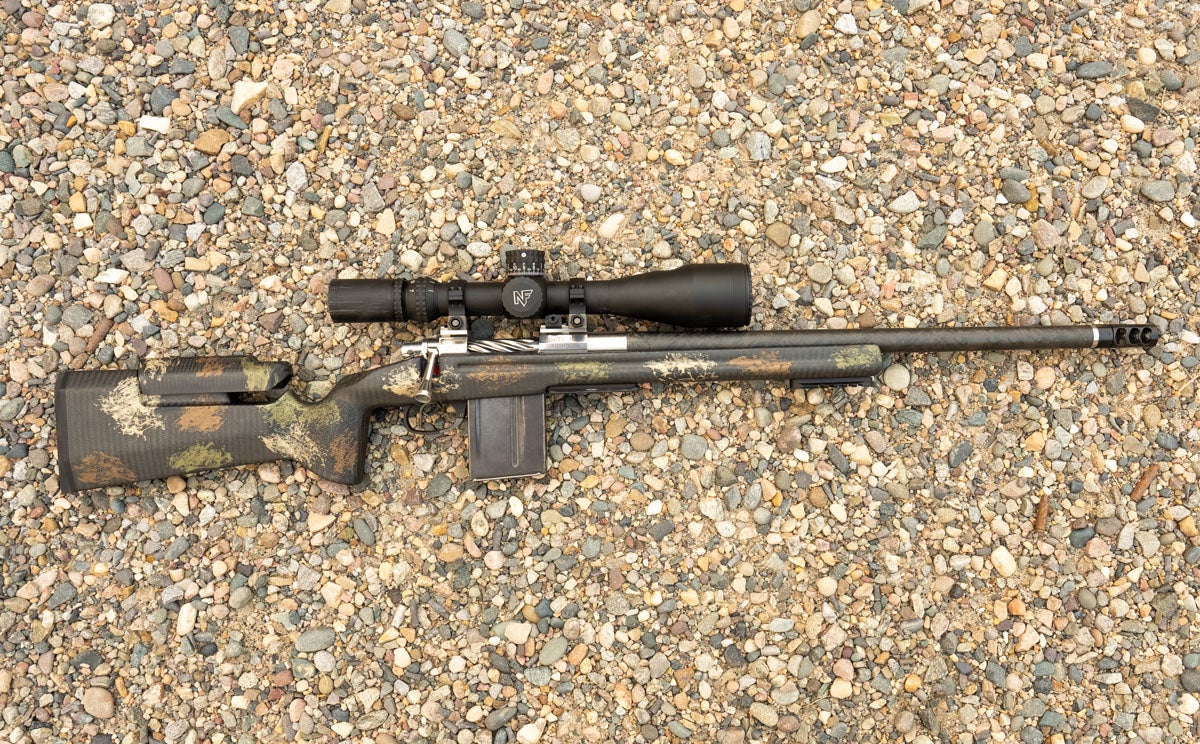 The Manners LRH stock is ideally suited for lightweight rifle builds and competitions like the NRL-Hunter series. John B. Snow
SHARE

The Manners LRH stock is a prime example of why precision rifle shooting is the most interesting segment of the gun world. No other facet of the outdoors industry currently innovates as quickly, and in the case of the LRH stock—short for Long Range Hunter—both precision rifle shooters and hunters benefit.

The stock is remarkable because of how it incorporates so many features competitive shooters desire—and I’m speaking of those who shoot practical precision rifle disciplines like the NRL, PRS, and Rifleman’s Team Challenge—in a lightweight format that makes it viable for hunters who want to keep a rifle’s weight to a minimum.

The design of the LRH is ideally suited for the NRL-Hunter competition series. This shooting format has exploded in the last couple years and is based around hunting scenarios where participants find, range, and engage animal-shaped steel silhouettes on the clock with most targets in the 200- to 800-yard range. In the “open light” and “factory” divisions rifles can weigh no more than 12 pounds with scope, bipod, and whatever other accessories attached. In addition, the cartridges used must meet a minimum “power factor,” which roughly translates to the 6.5 Creedmoor and up—the idea being that the rounds must be sufficient for hunting big game.

As with other precision rifle formats, being able to run a larger target scope as well as a sturdy bipod confers a major advantage. Both items gobble up a lot of the 12-pound weight allowance, so you must look for weight savings elsewhere. For this reason, carbon-fiber barrels, carbon-fiber stocks, and lightened actions are commonplace.

To save weight, most stocks need to sacrifice at least some of the features found on fully-fledged competition stocks. But through innovative design, the Manners LRH manages to check the most critical boxes for serious shooters.

The hardware used to give a stock an adjustable cheek piece usually adds a significant amount of weight. Between the adjustment knobs, fasteners, metal pillars on the comb, and the metal “receiver” embedded in the stock where the comb attaches, that often amounts to 12 to 16 ounces of added material.

The Manners LRH takes a minimalistic approach by securing the comb with two fasteners that take a 1/8-inch Allen wrench. Those fasteners screw into threaded metal sleeves in the stock, which have a minimal profile as well. To adjust the height of the comb, the stock comes with three polymer shims, which are incredibly light. One of the shims is .257 inches thick, and the other two are .126 inches thick. Depending on the combination of spacers employed, the user can set the comb to five different heights. As long as the scope isn’t mounted at an absurd height over the bore, you will be able to find a setting that works for you.

The only thing you give up is the ability to quickly adjust the comb height on the fly, which is rarely needed.

The LRH comes with a standard 13.75-inch length of pull and is configured with a weight-saving ½-inch recoil pad. Thicker recoil pads are nice but they add a surprising amount of weight to a stock. However, should you want a thicker recoil pad—or an adjustable length-of-pull spacer system—you can order an LRH stock so equipped via Manners build-your-own-stock page. (A look at that builder gives you sense of all the other custom features you can request, too.)

Like many stocks for precision rifle competition, the grip on the LRH is nearly vertical and has palm swells on either side that increase the grip’s width to 1.95 inches. This vertical orientation and hand-filling profile allow for good control over the stock with the trigger hand. With the fingers stacked vertically it is easier to apply even rearward pressure on the stock as it is pulled into the shooter’s shoulder. It also improves trigger control as the trigger finger is naturally aligned to sit flat across the trigger shoe and press straight back while breaking a shot.

At either side on top of the grip are nicely scalloped shelves to rest the shooting hand thumb, which lets the shooter hold the rifle while imparting a minimum of movement on the rifle.

The stock I have is actually a second generation Manners LRH. One of the main improvements is the quality of the texturing on the grip panels, which is sharp and beautifully defined. I had one of the first-gen LRH stocks for a while, and had no complaint with its construction, but I must admit that the improvements in the fit and finish of the newer version is a major upgrade. From a purely aesthetic standpoint the LRH is a stunner. The finish on the stock is even and smooth and there’s hardly a hint of a seam in the carbon where the two halves of the stock are joined.

The inletting is cleanly executed as well. You can see that as much pride went into making the LRH look good under the hood as was done with the exterior finish.

The stock is inletted so that it can accommodate an M24 barrel profile without any problem. My build uses a Proof carbon-fiber barrel with a Sendero contour, which is dimensionally very similar to the M24. The barrel sits evenly in the channel with a clean, professional look, even though I just screwed the rifle together myself.

Embedded within the stock is Manners’ Mini-Chassis, which is a frame of aluminum upon which the action sits when the stock and action are joined. This feature allows a shooter to assemble the rifle without needing to bed the action. When the action screws are tightened, the Mini Chassis holds the action like a vice.

Because I’m particular about my rifles, I opted to get a small bit of bedding done around the front and rear lugs. It gives me a bit of extra security, though it’s probably more mental than anything. I did shoot the rifle prior to bedding it, however, and the accuracy with factory Hornady ammo was excellent.

One of the coolest features on the Manners LRH stock is the 3.5-inch section of ARCA rail that’s mounted in front of the mag well. This lets the shooter clip the rifle directly into a tripod with an ARCA-compatible head to create a phenomenally stable shooting position. The rail is placed right at the rifle’s balance point, adding stability.

Even from a standing position, it is possible to make accurate hits on deer-sized vitals out to 600 yards with the rifle locked into a sturdy tripod. It’s a true game-changer for field marksmanship.

To keep the rail from adding unnecessary weight, Manners hollowed out the back of the unit. The total weight of the ARCA rail, including the two fasteners that secure it to the stock, is just 1.15 ounces.

For competition, that 3.5-inch length lets you clamp the rifle into something like the RRS Anvil-30 ballhead with enough clearance between the tripod head and magazine so that you can elevate the rifle for uphill shots without the mag bottoming out against the tripod leg. That can be an issue with systems that place a short piece of Pic rail right in front of the magazine well, leading to complications in the middle of stage. Ask me how I know.

You can order the Manners LRH stock with a variety of different swivel studs or pic rail sections on the fore-end. I opted for the Atlas BT-15 pic rail, which is just 3.35 inches long. It has enough rail segments to mount any bipod you choose and includes a QD cup for good measure.

To make sure the ARCA and pic rails stay put, Manners beefed up the areas of the stock where they are mounted. Manners added material where the rear screw on the ARCA rail is situated. They also created a series of reinforced slots where the T-nuts go that secure the pic rail and front end of the ARCA rail in the stock.

This clever design ensures that the stock will maintain its structural strength and rigidity despite its light weight. The bolt notch is another strength-enhancing element. It is molded into the stock and reinforced, rather than cut into the shell after the fact, which is a stronger design.

As a final touch on my stock, I had Manners add two QD cups on the stock’s left-hand side. I don’t like swivel studs on any of my competition rifles and prefer to sling them via QD mounts. They add a little bit of heft, but given that the overall weight of the stock with all these elements is just 2 pounds 3.25 ounces, their weight didn’t concern me in the slightest.

For a hunter or shooter who is technically inclined but wants to keep their rifle’s weight down and maximize portability, the Manners LRH stock sets a new standard. Nothing out there currently can match the feature set on this stock at the same weight. While the stock isn’t cheap—the builds start at $929—it is without question a state-of-the-art system.

The only thing that irritates me about the stock is that I can’t find anything to criticize about it. I take pride in being able to reveal the shortcomings and warts of top-flight gear, as minor as those imperfections might be. But with the Manners LRH, I’ve got nothing. It’s a hell of a stock for its intended audience, and that’s that.